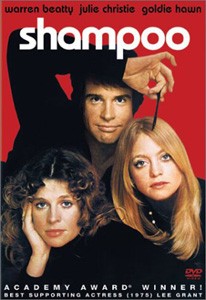 Hair Today, Gone Tomorrow: What Beatty needed was a madam to guide him.

Former madam Heidi Fleiss on the importance of goals

“Guess what my favorite movie is,” says Heidi Fleiss, standing in her Hollywood hills kitchen, clad in her preferred movie-watching garb of self-designed fluffy pink pajamas (part of her Heidiwear lingerie line), making a second stab at microwaving some popcorn. Meeting to screen Hal Ashby’s 1975 classic sex-farce Shampoo starring Warren Beatty, a film Fleiss has somehow never seen, I find myself in the kitchen of the notorious former Hollywood madam making helpful popcorn-zapping suggestions while she challenges me to guess her most beloved film.

Heidi Fleiss’ favorite movie? I think to myself. Pretty Baby? The Happy Hooker? Cannibal Women in the Avocado Jungle of Death?

“Becket,” she proclaims, interrupting my thoughts. “Becket. With Peter O’Toole and Richard Burton.”

I know the film. Henry II facing off against the Archbishop of Canterbury. It’s all about sex and madness. Corruption and greed.

“It’s about power and how to use it,” Fleiss asserts firmly. “It addresses the issues we all have to face in life: betrayal, love, anger and loyalty, society, politics, religion. I’ve always been very interested in that stuff, especially the subject of power. Ever since I was a kid, organizing all the neighborhood girls out on babysitting jobs, taking a piece of the profits for myself. Power is one of the great themes of literature.” It’s a theme she explored, in depth, in last year’s quirky, coffee-table memoir Pandering, and which she revisits in her newest work, The Player’s Handbook: The Ultimate Guide for Women, in stores in May.

We return to that theme two hours later, after successfully making the popcorn and kicking back in Fleiss’ plush, large-screen home theater to watch the DVD of Shampoo–the misadventures of spineless, motorcycle-riding, compulsively womanizing hairdresser George (Beatty), who can’t keep his pants on and thus loses both the woman he loves (Julie Christie) and his dream of owning his own hair salon. In Fleiss’ opinion, poor George ranks as one of the least powerful players in cinematic history.

“He’s an idiot!” she shouts, laughing. “A total idiot. What he needed was to sit down and try to imagine where he’d be in 10 years, to ask himself, ‘What do I want out of life? What will give me happiness, structure and balance?’ George is all over the place. You can tell by the bewildered look on his face. He’s totally dumbfounded and distracted by everything. He has no goals, no direction, no balance, no structure.”

“George has goals,” I say, surprised to find myself defending the guy. “He’s got the goal of owning his own shop.”

“Yeah, but he can’t make it happen,” she replies. “And why? Because he’s a fuckup! If George had stood up tall and said, ‘I want that shop and I’m gonna get it,’ he could have walked into that bank and gotten the loan. He could have shown them all how good he was–and I’m sure one of his many women was rich enough and willing enough to have cosigned the loan. It would have been easy.”

George, as legend has it, was based on several real-life hairdressers from Los Angeles, the late Gene Shacove being the primary model.

“I knew Gene really, really well,” Fleiss says. “I once ditched him at the Playboy Mansion. We were very close friends.

“Even in the illegal wiretaps of my phone,” she continues, referring to the police investigation that led to her 1994 arrest and subsequent three-year imprisonment for money laundering and attempted pandering, “there was a 45-minute conversation with Gene where he told me all about his penis and different options for getting it up.”

“Bet the LAPD loved that,” I remark.

“They were perverts,” she says shortly.