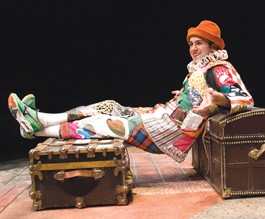 Crossing two off the Shakespeare life list, plus more

There is a great line in the movie Pretty Woman where Edward has escorted Vivian to her first opera and says to her, “People either love opera or they hate it. If they love it, they will always love it. If they don’t, they may learn to appreciate it, but it will never become part of their soul.” That’s how some of us feel about Shakespeare. From the best-known to the least-known, the works of William Shakespeare have a way of hooking certain people—myself among them—and keeping them for life. Most of us keep a running record of the Shakespeare plays we have seen. It’s like our Shakespeare life list, and fans will often talk about their life lists in terms of those plays they have yet to see. Of the Bard’s 36 plays, the popular ones are usually the first to be crossed off. As of last weekend, during my annual summertime pilgrimage to the Oregon Shakespeare Festival in Ashland, I was able to check off two more plays from my own list, leaving me with three to see before I die: Henry IV, Part Two, Timon of Athens and Two Noble Kinsmen. For now, I remain grateful that OSF has finally offered All’s Well That Ends Well and Henry VIII.

I’ll get to those later.Of the 11 shows launched by OSF during its nine-month-long 2009 season, I’ve reviewed Dead Man’s Cell Phone, Death and the King’s Horseman (no longer playing), Macbeth and The Music Man (both running through Nov. 1). Among the other bounteous offerings presented this year, two others rounded out the quartet of shows I experienced last weekend.

The Servant of Two Masters, originally written by Carlo Goldoni in 1753, is a popular Italian comedy that seems to return to favor every decade or so. In the OSF’s Monty Pythonesque reworking of this farce, the text is dropped into a metaphorical food processor and poured out as a hilarious, anachronistic concoction that would baffle Goldoni but will delight anyone who thinks bad puns, silly faces, gross-out violence and fart jokes are funny (guilty as charged). In what will certainly go down as the least high-brow show ever staged at OSF, Servant is directed by Tracy Young and played by a cast of whirling, twirling comic maniacs who try to tell Goldoni’s story but are beset by budget set-backs. In a rare bit of comedic self-reference, the actors inform the audience early on that their director has been fired, their props have been borrowed from other shows currently playing at the festival and that they are at the mercy of random power outages approved by management as a cost-saving measure (cue blackout, the first of many, all beautifully timed).

And with that, they proceed with the story of Truffaldino (Mark Bedard), a very hungry professional servant who, in his quest for a good square meal in Vienna, ends up working for two masters: Federigo Rasponi, who is actually Rasponi’s sister, Beatrice (Kate Mulligan), in disguise, and Florindo (Elijah Alexander), Beatrice’s lost love. The whole pantheon of commedia dell’ arte characters are trotted out and fooled around with. The result is a slight but hilarious departure for OSF, and a smart move, as evidenced by the full houses drawn to the show by the good word of mouth.Equivocation (running through Oct. 31) is a world premiere by playwright Bill Cain. A brilliant and intoxicating historical “what-if-er,” the play examines the relationships between William Shakespeare (a first-rate Anthony Heald), his overlooked daughter Judith (Christine Albright), and the actors who made up his theater company, the King’s Men. The story follows Shakespeare (here called Shagspeare, one of many historical alternatives to the Bard’s name), as he is forced by King James’ right-hand man Sir Robert Cecil (Jonathan Haugen) to write a piece of propaganda about the recently foiled Gunpowder Plot, in which a band of Catholics may or may not have tried to blow up Parliament.

As Shag attempts to dig into the real story behind the plot, he finds his conscience awakening, and sets out, against his fellow actors’ wishes, to write a play that will tell the truth, whether they all hang for it or not. Gorgeously written, meticulously directed by OSF artistic director Bill Rauch, this is easily the best show of the season. As gripping as a thriller, as eye-opening as the best of satires, it also packs a huge emotional wallop, affirming what it is about Shakespeare that has captured the souls of so many.Which brings us to the two seldom-seen works.

Henry VII (playing through Oct. 9 on the outdoor Elizabethan stage) first appeared in 1613 and is believed to have been co-authored with John Fletcher, after Shakespeare’s official retirement a year or two before. This visually grand but textually dense drama, directed with grandeur and pomp by John Sipes, reveals exactly why this play is so seldom performed. Though very well acted, with strong performances by Elijah Alexander as the waffling King Henry, Anthony Heald as the manipulative Cardinal Wolsey and the great Vilma Shiva as Katherine, Henry’s fiery first but not last queen, the play is primarily interesting for the historical detail. Though there is little in the way of battles, and the plot is carried solely on a wave of words, Henry VIII describes the moment when England split with the Catholic church. The vibrant cast and sumptuous costumes save the show from tedium, but will probably appeal mainly to those who seek the novelty of viewing so rare an offering.

Ironically, All’s Well That Ends Well (playing through Nov. 1) is so rarely performed because of its ending, in which things don’t really end so well, after all. The miraculous thing about this shimmering, sweet-hearted production, staged in OSF’s intimate New Theater, is the way director Amanda Dehnert has transformed the play into something altogether new, with an ending that is memorably touching, and actually makes sense. That Dehnert has accomplished this by adding additional voiceover narration (“Once upon a time in a faraway land . . .”) and has wholly invented a new character to tie the show together, might offend some purists, but as Vivian might say in Pretty Woman, “Screw ’em.”

For the full lineup of shows, info, directions and ticket sales, visit www.osfashland.org.