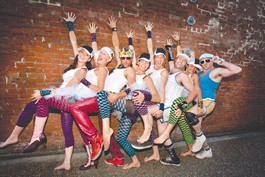 Local dance company K Plus and the Electrolytes have arrived—you know, almost

Performing with a local dance company can be like volunteering at the food shelter, performing in a third-grade recital and busking on some big city street, all at the same time. The pay is nonexistent, the only people in the audience seem to be Mom and Dad, and venues are hard to come by. At the end of the day, there better be a good, strong passion behind the dance. New dance company K Plus and the Electrolytes have the passion part down.

“My whole intention with it from the very beginning has been to have it be a nonprofit organization,” group founder Kaci Tipton says as she settles into a wrought-iron chair outside Andy’s Market in Sebastopol. She has a small build but radiates a punch of energy; half of her face is hidden behind pink sunglasses and the other half is taken up by a huge smile. She rifles through her fuzzy, stuffed-animal purse and triumphantly comes up with a K Plus and the Electrolytes button. “The company is kind of a product to generate awareness and money to bring food and medicine to people around the world and in our community,” she continues.

The group has been making the performance rounds this summer with appearances at the Harmony Festival and activism benefits all over the county.

“Audiences are giving us great feedback,” Tipton says. “We have so much fun, and we just bring this buzz of energy wherever we go.”

The Electrolytes evoke a feeling not unlike one might have felt while watching the San Francisco Mime Troupe during the 1960s: artistic talent wrapped up in a circuslike package with an activist flair.

“We definitely fit in our own kind of box in the dance community,” she says. “We’re more like a circus. We’re not just dancing for the sake of dancing. We want to travel around the world and perform at orphanages and just spread joy.”

The dance scene in the North Bay, much like other small-town artistic centers, is constantly subject to abandonment; many talented dancers often pack up and move to L.A. or San Francisco where companies are more successful and there are monthly checks. Tipton agrees that by staying in the area, the Electrolytes are trying to do their part for the arts.

“We’re kind of taking it slow for now. We can’t really blow up huge quite yet,” she adds, mentioning her busy schedule as a reason for the restraint. Tipton is a 33-year-old nursing student at the Santa Rosa Junior College with her own healing practice, Full Spectrum Healing Arts. Though she is immersed in Western medicine, she says her interests lie more toward the Eastern practice of Ayurveda.

Not unsurprisingly, this fusion of West meets East can also be found in her dance; she has spent time with a Bollywood dance troupe and several contemporary companies over the years. After a semester without dance, she decided to take matters into her own hands rather than seek out a company that would fit her schedule. She passed around flyers, and the first rehearsal for K Plus and the Electrolytes was held in September of 2008.

When asked to define the company’s style, Tipton grins and says that she has been considering how to explain it for a while.

“That is the question,” she says. “It’s so hard to do. We need to come up with a new word for it. We have elements of every dance I’ve ever done in my life.” Since Tipton has danced for about 25 years, this includes a host of influences: Bollywood to jazz, contemporary modern to hip-hop.

“I like to describe it as risqué hilarity. That doesn’t scream dance troupe, but it’s a good way to describe what we do,” she says. “We’re very burlesque, and we do onstage costume changes and that kind of thing. You name it, we’ve probably got in there somewhere.”

Company member Bryce Williams has danced alongside Tipton on and off since their involvement with local dance troupe Grassroots Movement in 2005. Although the group has since dispersed, Williams joined forces with Tipton with the creation of the Electrolytes.

“Dancing in the troop has been a total blast,” Williams says. “Kaci choreographs from the heart and soul of a funky jazzy rainbow with tap shoes and Adidas track shorts. The troupe is nothing short of a wild collection of personalities.”

Funky jazzy rainbow, indeed. The current cast of members stands at about 11, but fluctuates, explains Tipton, and throughout the changing numbers she says a group of six dancers have formed the core of the group, including three men who play horns when they’re not playing horndogs. “We have all been great friends and artists together for a long time,” Williams says. “It shows in the pieces we have created.”

One feature that makes the Electrolytes so intriguing is the difference in skill and technical level among company members. Traditionally, a dance company strives for uniform talent, making the pieces more consistent, but Tipton says the lack of conformity is part of what makes the troupe unique.

Area dancer Allison Frenzel says, “My experience with the Electrolytes has been quite different than my experience working in other performance-based dance companies. The dancers learn at their own pace, and there is no competitive energy or judgment. That’s a refreshing mentality in the dance world.”

After the initial round of performances last fall and this spring, audience members contacted Tipton vying for an opportunity to perform with the group.

“It started off as being very inclusive,” Tipton admits, “but now that we’re getting better, I’m not really letting people in who don’t have any dance experience, because we’re evolving so quickly.”

She says the members are getting stronger with each rehearsal and becoming a more cohesive unit. But where, deep in the mind of the choreographer with the heart and soul of a funky jazzy rainbow, did the group’s unique moniker come from?

“Electrolytes are keys to life. We would die without them,” Tipton says. “K plus is an electrolyte—it’s potassium in its normal state, and it’s one of the most important electrolytes we need. So it’s not like I’m different from the electrolytes; I am an electrolyte.”

She adds with a giggle, “The dancers are coming up with their own electrolyte names now, it’s cute. Chloe-ride, Phospho-RayRay, Foxy Dioxy—rehearsals are a blast. We laugh a lot, and we dance our asses off.”