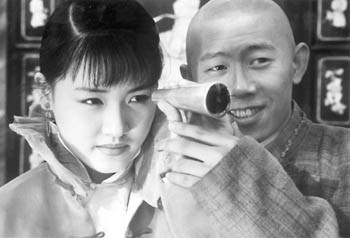 EDIE MEIDAV isn’t talking. Not much. Not yet. “I’m always a little tongue-tied right after watching a movie,” she confesses in a half-whisper, as the lights come up in the theater where we’ve just seen Ann Hu’s captivating Shadow Magic. Keeping our conversation at the chit-chat level–favorite movies, favorite books–we make our way out of the theater and initiate a search for a quiet coffee shop.

A few minutes later, double mocha in hand, Meidav is ready to talk.

She’s anything but tongue-tied about Shadow Magic.

A word-of-mouth, art-house hit about culture shock in early 20th-century China, the film stars Xia Yu as Liu Jinglun, a shy young photographer with an eager fascination with Western inventions, and Jared Harris as Raymond Wallace, a shabby English showman who arrives in Peking to introduce the first moving pictures. While the city-folk are initially resistant, Liu is instantly captivated by the amazing silent movies–mainly footage of French people cavorting in bathing suits–and soon persuades Raymond to make him his business partner, thus alienating himself from his father, his co-workers, and ultimately his own deepest traditions.

Edie Meidav knows a thing or two about alienation and culture shock.

The multilingual poet-dancer-author-adventurer, raised in Berkeley, has traveled throughout the world, living at various times in Canada, France, Scotland, Ireland, India. At 34, Meidav–who now lives in a small town on the Mendocino coast–already has racked up enough travel miles to impress Marco Polo. In West Africa she danced with a local dance troupe, and in Spain she lived in a cave for several months with a band of Spanish Gypsies. In Sri Lanka (formerly Ceylon)–a tear-shaped Island off the southeast coast of India–Meidav monitored local elections, learned the Sinhala language, studied dance–and hatched the idea for her first novel. The Far Field, newly released by Houghton Mifflin, is a vast poetic epic of 1930s Ceylon, following idealistic journalist Henry Fyre Gould on an ultimately disastrous mission to free the people of Ceylon from English colonialism by establishing a Buddhist utopia on the island.

Bad things happen, increasingly worsening, but they do so in sensual, handcrafted prose that has won the work of Meidav comparisons to the writings of Barbara Kingsolver and Michael Ondaatje.

In The Far Field, Henry’s overidealized view of the Ceylonese leads him into trouble. And in Shadow Magic, Raymond’s simplistic expectations of the Chinese are ultimately confounded. According to Meidav, this is exactly the kind of education that awaits the Western world traveler.

“I started out with such a utopian ideal of other cultures,” she explains, cradling her warm coffee cup as we sit outside while the sun sets. “Even as a child. As a little girl I collected Unicef dolls. I had a poster of this woman from Addis Ababa. I had this intense desire to learn all the world’s languages and to have incredible friendships abroad. So when I did begin traveling, and learned that people in these countries weren’t all milk and honey, I was so disappointed.

In the film, while Raymond’s quest for fame and fortune ends in disappointment, it is the Chinese people who stand to suffer the most from the cultural chaos caused by the Western movie machine. We see how the suddenly popular moving picture provokes a decline in attendance at the Chinese opera. Meidav has her own perspective on that. “Did the Noble Man’s opera get lost because of the rise of moving pictures?” she asks. “Has Western progress undermined Eastern tradition? Even the question is a Western one. It’s a very Western equation to assume there’s such a linear, finite substitution: movie comes, opera goes. It’s not so simple.”

Not that the West hasn’t done its share of damage to other cultures. On the contrary. “I think it’s evil what we’ve done,” she says. “The unthinking, blundering aggression that we bring to other countries. America, with the personality of a 2-year-old, thinking it can have anything it wants. That’s evil. That’s part of what I wanted to write about in my book.”

ONE OF Shadow Magic‘s most powerful scenes demonstrates how easily even a well-meaning outsider can slip up when attempting to slip into other cultures. When Raymond goes to the opera, he is so enraptured by what he sees on the stage that he fails to applaud along with the other patrons. This is seen as a terrible insult to the performers. To make matters worse, when Raymond realizes he’s somehow upsetting the others, he chooses to slip out of the theater in mid-performance, an even greater insult.

Meidav knows how easily such blunders can occur.

“I was housesitting in Sri Lanka for a couple of weeks in this American embassy mansion,” she tells, wincing at the memory. “It was early on in my stay, and I still didn’t fully understand how stratified the culture was. I had those very utopian ideals, all that American egalitarianist stuff.” A poor Tamil man guarded the house during the day, sleeping at night on a straw mat in the garage. The embassy couple for whom Meidav was sitting hadn’t explained the caste system protocol.

“It really upset me that I was in this intensely beautiful mansion, and this guy had to sit out there in the burning heat.” She started talking to him, then bringing him food when she brought her own dinner home from town. At first, the man refused to eat at the same time or place that she did. “But finally,” she says, “it progressed to where we were having what I believed was a fine, egalitarian relationship, sitting at the table talking together over dinner. And I thought, ‘This is great. I’ve achieved my goal. I’ve made him feel like a human being.’ ”

But in fact, she’d committed a major cultural faux pas–and was finally told so by an upper-caste teacher she’d befriended.

“She said, ‘You’re sowing discontent. You think you can come here with all of your American ideas. You think you can come here and give this guy a breeze of freedom, but he’s going to go back to the same way of life anyway.’ It was very upsetting to me. And he felt the cultural disconnect also. It was a shameful thing, and he ran away for a while. So that was my first big experience in Sri Lanka.”

Edie Meidav pauses a moment. “We Americans are so in love with the flavor of democracy,” she says. “The hardest thing about traveling in other cultures is learning to accept all the flavors that come at you.”