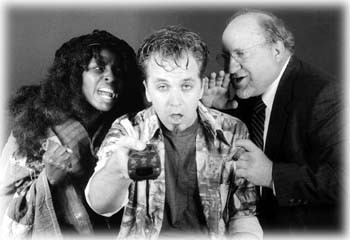 Who’s on Faust?: Velina Brown (left) and Ed Holmes (right) vie for the soul of Michael Oosterom in ‘Killing Time.’

TAKE A LOOK at the cultural landscape of the country,” exhorts Bruce Barthol, composer/ lyricist of the legendary, Tony Award­winning San Francisco Mime Troupe. “Check the national Zeitgeist. Doesn’t it seem like we’re rushing headlong into the 1890s? Robber barons are running everything, the working class feels powerless, and it only seems to be getting worse.

“It’s a bizarre period in American history,” he laughs, adding, “There’s certainly no shortage of material for us to put up onstage. The times are ripe for political satire.”

And ripe political satire–in the form of elaborate musical productions with a fierce, funny, boldly in-your-face subtext–is exactly the stuff of the Mime Troupe’s genius. Despite its deceptively mute-sounding title (it hasn’t placed an emphasis on actual mime since 1962), this political theater company is, as its posters proclaim, “anything but silent!”

Unabashedly liberal, the troupe has a knack for skewering the various injustices of society while simultaneously making its audiences laugh and walk away humming, a neat trick that has propelled it to its status as one of the oldest, most respected political theater troupes in America.

Since its inception, the troupe has tackled such controversial subjects as racism and civil rights, the Vietnam War, CIA drug trafficking, food prices, housing shortages, the energy crisis, the moral majority, and similar social issues. Not surprisingly, it has made as many enemies as friends: In 1965 it was shut down in mid-performance by the city of San Francisco, a situation that gained it national attention and the support of the ACLU, an event that has repeated itself throughout its lively history.

Now, as the National Endowment for the Arts (a past supporter of the troupe’s free city park programs and its active tours of college campuses) is battling for its own life, the troupe is struggling to keep its touring schedule alive as its funding dwindles to a mere fraction of what it once was.

“The money has all but dried up,” agrees Barthol. “We view it as a form of censorship. There are plenty of people who’d prefer we were silent.” A 21-year veteran of the troupe, Barthol lives just outside the town of Sonoma, where the troupe, incidentally, will be performing Thursday, July 24.

The show, which debuted last month in Golden Gate Park in spite of the company’s financial woes, is a broad musical comedy titled Killing Time. In part about corporate downsizing, the farcical, Faustian show is the tale of Jacob, a longtime temp-worker with far more education than ambition, who is forced into a disturbing personal crisis.

Not only has a persistent bag lady–who claims to be receiving secret messages from President Clinton–proclaimed Jacob as the savior of the underclass, but he is also being courted as the successor to corporate giant Jack Belch, “King of the Downsizers,” who mistakes the hapless couch-potato for a man as economically ruthless as himself.

“It’s a funny show about a non-laughing matter, the basic economic reality of the country,” Barthol says. “And it’s got really great music.” The songs–written in part by Barthol, a former member of Country Joe and the Fish–are a mix of styles from contemporary rock to campy camp songs.

“What we’re doing is the kind of theater that was done in Greece,” he explains. “We put onstage the basic concerns of everyday people.” With the financial problems the troupe is facing, and the state of the arts in general, might this be our last chance to take in this kind of grassroots political theater?

“Naaah,” Barthol insists with a laugh. “Political theater has always been out of fashion. Then again, it’s always been in fashion. The point is, it may not always be popular with the powers that be, but it will always, always be here.”