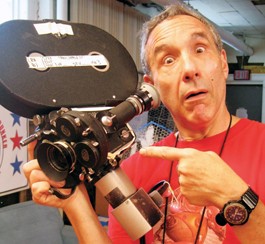 “But what I really want to do is direct” has long been the punch line of most Hollywood discussions. Generally, it’s an actor or writer making the admission, but now, thanks to digital media tools pre-installed on most laptops, it could be anyone. And no longer is the aspiration simply a misguided pipe dream—it’s a career path, and everyone’s taking it.

According to the Sundance Institute, the total number of U.S. feature films submitted for the 2010 Sundance Film Festival was 1,920. However, the odds of any of these films receiving distribution deals and returning a profit, let alone acceptance into the festival itself, are, by the calculations of film researcher Jeremy Juuso, “somewhere less than 3 percent.”

So how do auteurs get their product into the studio distribution system? Don’t bother, suggests writer, director and producer Lloyd Kaufman (pictured), the independent impresario behind Troma Entertainment, best known for its Toxic Avenger film series. Kaufman urges filmmakers to use emerging digital media tools to cultivate audiences and “sell your own damn movie.”

Part of the ongoing Your Own Damn Film School series from Focal Press, Kaufman’s Sell Your Own Damn Movie is a brass-tacks how-to (and, as often, how-not-to) primer for those otherwise lost in the crevice left by the largest seismic shift in independent film since Sex, Lies and Videotape, in 1989. The 22 years since have seen the Sundance-to-multiplex scenario go the way of Betamax (as has videotape and, perhaps soon, sex and lies).

Kaufman’s is particularly relevant advice since most studio specialty divisions have shuttered in the past few years—only two studio-owned “independents” remain. Besides video-on-demand, direct DVD sales and a variety of other self-distribution methods detailed in his book, Kaufman sees hope in the new app platform for mobile devices—with a caveat.

“As long as net neutrality is not destroyed by the billions of dollars the Motion Picture Association of America and big media are spending on lobbying to destroy the democratic internet, all platforms including the iPad will be very useful to independent art,” writes Kaufman via email. “Of course, with ever increasing media consolidation and abuse of the first amendment by media conglomerates—see News Corp recently?—the ‘Maxi-PAD’ may be more useful. Apps are and will be important too for independent filmmakers.”

No word if Kaufman’s next book will be Sell Your Own Damn App, but it stands to reason that many independent filmmakers will do just that. Indeed, the next wave of independent cinema won’t be in a cinema at all, but coming to a tablet near you.

What Daedalus Howell really wants to do is direct at FMRL.com.

Next ArticleThis is the Bay Area