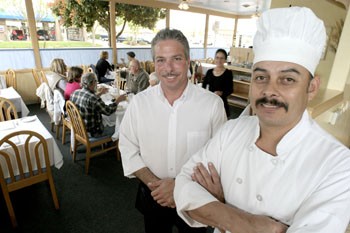 Pasta on the plates, Las Vegas on the ceiling, and wheat stalks on the tables at Petaluma’s Semolina

The one thing I truly despise in a restaurant–as a customer, not a critic, because we restaurant critics are generally a self-important lot whose opinions should be taken lightly–is when a place aspires to be the kind of restaurant it will never be.

Here are a few hallmarks of the places I’m talking about: cruets of harsh lesser-grade balsamic vinegar on the tables; needlessly oversized plates whose rims are garnished with errant specks of crudely chopped parsley; entrées featuring trendy ingredients like lemongrass just for the sake of being trendy.

Semolina, recently opened on East Washington Street in Petaluma, does indulge in the balsamic vinegar and plate garnishing–though lemongrass was not to be found on their straightforward menu of Italian classics. The difference is that Semolina knows 100 percent what kind of restaurant it is and does not pretend to be something else.

The sign facing Washington Street reads “Semolina: Italian Food” in block letters. Italian Food, make no bones about it–not Cal-Italian Food, not Regional Italian Cooking, not Tuscan Specialties. From the kitchen to the service, Semolina is straightforward and sincere–and a little clumsy at times, but the general good-natured feel there compensates, for the most part.

Owners/chefs Joe Peirano and Jose Perez (both formerly of Petaluma’s Caffe Giostra, among other places) had to have a lot of ambition to convert a vacant A&W stand to an Italian restaurant. You have to hand it to them. Early on a Friday night, the dining room was packed. Our party–all of us in our late 20s and early 30s–was the youngest there, save a kid squirming impatiently as his parents waited for a table. I don’t think it’s presumptuous to say that Semolina is an old-people restaurant–not stuffy, but decidedly unhip.

The ceiling is painted sky-blue with wispy clouds (“Ooh, Las Vegas-style,” observed one friend), and a small handful of wheat stalks sit in bud vases on every table (“I like how looking across at you through this wheat, I feel as if we were in a field,” another of us said).

This is a good time to mention that semolina is a coarse, high-protein grade of durham wheat used to make pasta. Naming a restaurant that serves Italian food after wheat does make sense, though I’m hoping this restaurants-named-after-ingredients trend is on its way out. After Roux, Mirepoix, Salt, Prune, and a host of others, one has to wonder: What next? A bakery called Yeast? A seafood bar called Smelt?

The tables at Semolina are a little too tightly packed into the dining room, making the servers have to squeeze in and out of tight spots and continuously dodge each other. Actually, the whole place has an odd flow to it, thanks to the lingering bad feng shui of the A&W. It’s hard to make fine dining from the raw material of root beer, but to Semolina’s credit, no one there seemed to mind too much–diners sat chatting it up at their tables, tucking into big plates of pasta.

There are no red-checkered tablecloths to be seen in the place, but their spirit hovers over (or rather under) Semolina’s menu, which is built upon Italian-American classics like eggplant parmesan, chicken cacciatore, and linguini with clams. Our waiter leaned on my chair as he took our order. This looked to be an attempt to create a casual rapport with us rather than a consequence of fatigue, but please.

Small crocks of caponata, a tangy sweet-sour eggplant relish studded with red onion and golden raisins, arrived with the bread. This stuff is great. I preferred it to the bruschetta ($5.50 for six), which was very filling for an appetizer and would have been an ideal starter for a large party.

Thick slices of bread were topped with a generous coating of pesto, melted mozzarella cheese, and chopped fresh tomatoes and garlic dressed in olive oil. It was a very salty affair; pesto is too intense to spread on thick like that. Melting the mozzarella is not a traditional touch, though everyone at the table liked it that way.

Semolina’s compact wine list could benefit from the addition of a few bottles; their price points generally fall between $18 and $22, and sometimes people like to splurge. We had a bottle of Ruffino 2001 Chianti ($18), a workhorse of a wine that’s great for drinkin’ but not thinkin’.

Strangely, our bottle of wine was warm–not cool, not room temperature, but slightly warm, as if it had been stored next to a heating element. And our glasses were smudged. Our waiter poured a taste not only for me, who had ordered the wine, but for all of us at the table. Is this a new approach to wine service that I’m not aware of?

The spinach salad ($5.95) advertised pancetta and mushrooms in a brandy vinaigrette. The tiny bits of cold, diced pancetta had a hammy appearance which gave on that it had never felt the heat of a skillet. A few random soggy and thinly sliced mushrooms hid obscured underneath the well-dressed baby spinach leaves.

Semolina does a great job with sauces, though they could go a little lighter on the cooking time, as our entrées, while tasty, all suffered from a little overcooking. The risotto special ($18.95)–grilled duck and mushroom–was generous in portion and rich with mushroom flavor. However, the sliced grilled duck breast was overdone (our waiter failed to inquire if we had a doneness preference for the duck breast; some diners might want to order it medium-rare), as was the rice, if just a teensy bit, but the dish was very good overall.

The fettuccini viargenia ($13.95)–prawns, scallops, mushrooms, green onions, and baby shrimp in a cream sauce–was a little past al dente, and the plentiful scallops and shrimp likewise had spent too long on the fire. It was full of flavor, though, and Mr. Bir du Jour was happy with it.

The veal marsala ($15.95) came in a tasty demi-glace with slices of shitake mushrooms. The three medallions of veal were seasoned well and the demi-glace was delicious, but the meat itself seemed a little gnarly, not light and delicate and tender like good veal.

Both entrées came with a small square of rich potatoes au gratin–delicious and oddly pungent, thanks to the addition of sliced onions–and buttered broccoli. The sea bass special ($16.95) was dotted with capers and smothered in a very lemony sauce whose creaminess was appealing, but it squelched the fish’s own flavor. And once again, the fish was a tad overcooked.

Both of our fish and veal entrées came out plated in what I’ve heard called “three point landing” style: starch, vegetable, and meat directly on the plate–one-two-three–none of them touching. Three point landings have grown more and more scarce in restaurants, and I felt a nostalgia looking upon our easy-to-assess dinners.

The underlying issue is not the food but professionalism, and for whatever reason, we ordered neither the “tort” nor the “brullet.” We did try the tiramisu ($4.95), which was fine save the tinge of freezer to its taste (I’m guessing it was one of those premade frozen deals), and the profiteroles ($4.95), pastry shells filled with vanilla ice cream and topped with chocolate sauce and toasted sliced almonds.

The thread running through all of Semolina’s food is that it’s not terribly expensive and it’s easy to understand, and the place has a spunky, neighborhood feel. However, there are other Italian places around here with better food at better values.

Now that Semolina is packed, its new mission is to prove its longevity.