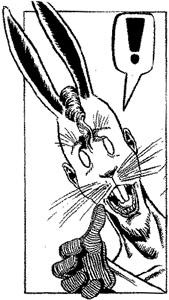 Like many artists, Paul Boudreaux lives close to his work. In fact, it shares his bedroom. A prolific painter and creator of numerous “street-style” comic books, the intense, 27-year-old artist lives in a tiny backyard cottage in Penngrove, with little space and no room for a dedicated studio in which to allow the creative fluids to flow.

This explains the pair of large drawing boards that are crammed in across from his bed, effectively dominating the area while providing a pregnant metaphor for the passions that dominate Boudreaux’s life. His one spare room would make an adequate studio were it not already packed to the plaster roof with other people’s art, evidence of Boudreaux’s standing as a kind of underground artist’s P. T. Barnum, fervently hawking their wares.

Many of the larger works quartered here are slated for upcoming coffeehouse exhibitions, while the stacks of edgy sketches and “comix” will end up in next month’s issue of Crust, a quarterly street-art magazine that he’s been mothering along for the last few years.

“Unfortunately,” Boudreaux amiably shrugs, “I make no money from any of this, so I have to work a full-time job. The bills must be paid.”

He waves at a towering stack of T-shirts, proof of his day job designing whimsical images for LifeForms International in Rohnert Park, the company famous for unleashing the shirts depicting sunglass-adorned frogs. Last week, he took time off from drawing frogs to attend an independent publishers’ convention in San Jose, where he spent a few days promoting Crust while talking shop with other artists.

“It’s important to get together with other people who are out there creating and publishing stuff on their own, basically just for the love of it, just to get our ideas across. We’re not looking for any kind of commercial success,” he says.

Asked to rethink that last remark, Boudreaux laughs. “Maybe we just don’t expect commercial success, though I personally would have no problem with it. In fact, it’s what I dream about.”

Boudreaux has just touched on one of the most basic and daunting questions of living the life of an artist: how to maintain a working balance between pure artistic craft and survival-level commerce. In other words, how can artists devote themselves soul and shoelaces to their creative impulses, yet still expect to eat dinner now and then? Curious and curiouser, The Independent decided to survey some of the county’s most talented underground artists to get their views on this perspective.

The art world–above and below ground–is full of talk that illustrates this financial multiple-personality syndrome of the serious artist. Many artists say you’ve sold out if ever you accept cash for your work, while others insist you have not become a real artist until you’ve sold your work. One local painter welcomed a broken leg so he could stay home from work and devote himself to his artwork. A Petaluma bookseller, who paints in his spare time, reportedly turned down an offer of $200 for a painting, opting instead to sell it for $25 to someone who, he felt, truly understood it. Though a few local artists have found ways to make a living from their art, many of them never sell a single thing.

Though Boudreaux has sold a number of pieces, he expresses a loud discomfort with having taken cold cash for something he created without cash in mind.

There’s no shame in using your art to make money,” insists Diana Kelly over the phone. A painter and sculptor who recently earned an arts degree from Sonoma State University, she has been known to take on the occasional freelance art job while juggling a new baby and her own loftier artistic endeavors. “I don’t think commercialism is necessarily the Work of the Devil.

“Look at history,” she remarks. “The pre-Raphaelites all designed wallpaper so they could afford to do what they wanted to do. Even the Sistine Chapel was a commissioned work. That wasn’t Michelangelo’s idea, but no one’s going to say it isn’t art. My passion may not lie in doing commercial work, but my husband and I would like to own our own home someday. You gotta do what you gotta do.”

Kelly’s husband, Richard, also an artist, agrees. To save up for that house, he works with Boudreaux at LifeForms, and has learned to stave off the niggling fear that he is somehow selling out his artistic skills.

“The notion we all once had as aspiring 18-year-old artists–that we would spend our time creating nothing but gigantic masterpieces–that ideal does get tempered by a dose of reality.” Even so, he confesses that his most satisfying artistic experience was creating a plaque as a gift for some friends. He’s also proud of having created an illustration that is worn on the peg leg of a man in the Midwest. “It’s kind of a thrill to know that my art is a part of somebody like that.”

“I will only do the work I’m comfortable doing,” states Santa Rosan Bruce Stengl, leading the way into his own bedroom/studio bedecked with high-energy, comic book­style illustrations (and a tiny framed Rembrandt print, smack in the middle of the cartoons).

Though recently employed as a label designer, Stengl is trying to find work that is more satisfying, hoping for a job that allows him enough time to illustrate his offbeat, ongoing mini-comic series, Rabbit Boy. Though fiercely anticipated by a core cluster of fans, the comix are hardly a moneymaker; Stengl spends months designing each issue, which he prints up at Kinko’s in small batches of 35 at a time, only to sell them for a scant dollar apiece. Often, if an appreciative fan has no money, he’ll give the book away.

“I don’t have a problem making a living off my art, if I can,” he says “though I suspect I’ll end up finding the balance somewhere. The formula I’m seeking is to have half of my income come from my art. Then I could probably stand to have another 9-to-5 job. I just don’t want to sell out my art.”

“In the art world, people do tend to resent those who seem especially fixed on selling their work,” offers Gaye Shelton. As both a painter and the director of the California Museum of Art, Shelton understands the treacherous duality of making a living from art. “If you are good at promoting yourself, and you are eager to close a sale, you can be seen as an artist who’s sold out. On the other hand, it’s a very luxurious point of view to think you can focus only on the work–and never on how to sell it.”

On the edge of Santa Rosa stands an old World War II­era building that now houses an ever-shifting number of artists, each residing in small studios where they work and live for relatively little expense. With one or two exceptions, all these artists hold day jobs, while spending their evenings pursuing their craft. The classic of the struggling artist, this loose-knit community known simply as The Studio reflects the same disparity of viewpoint as has been reflected by all the above artists. While planning for a recent open-studio event, there was–according to resident Glennith Lambert–an intense debate over whether proceeds from any sales might be donated to charity. Those opposed felt that selling work is so rare an occurrence that it would be wrong not to benefit personally from the cash. In the end, the charity idea was dropped.

“It’s a never-ending struggle,” sighs Lambert, who works as a substitute teacher, and whose living quarters are packed with intriguing sculptures that blend ethnocentric claywork with computer art. “A lot of artists actually quit doing art altogether, because they can’t afford to go on,” he says. “I certainly don’t think of this as a source of income. I’d just like to sell enough to maintain my art habit.”

Across the hall lives sculptor Miguel Maceira. His viewpoint is decidedly resigned.

“We’re fortunate to be able to do art at all,” he says, smiling widely. “Most people don’t even have that. No one’s forcing me to do this. I do odd jobs to pay the rent, and I do my art for myself. Sometimes I get paid for my work, sometimes not. I never feel like I’m selling out. I know how lucky I am.”

“You do your work, that’s all there is to it,” comments William DeRaymond, a painter of vibrant canvases who resides on the second floor of the building and drives a bus for the county. “You may never see the rewards of the marketplace. That doesn’t matter. You have to remain true to your vision.

“Aside from that, taking money does not constitute selling out, no matter what some people say. We live in a culture where we are rewarded for producing something that people like by being paid for it. That’s the way it works.” He pauses before offering his final thought, a remark that serves as an apt summation of the entire subject.

“As long as you are working to please yourself, and not some potential buyer, then you are a true artist,” says DeRaymond, nodding. “Beyond that–let the financial gain come. I personally am all ready for it.”