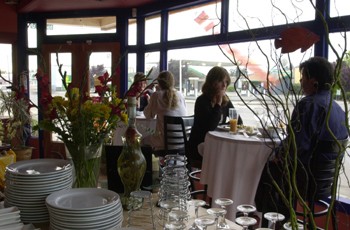 By the Beautiful Sea

It wasn’t all that long ago that any Chinese restaurant worth its soy sauce prominently featured the Flaming Pu Pu Platter. As fun to say as it was to eat, this madcap appetizer was the touchstone of 1980s Midwestern Amerasian cuisine. Featuring mountains of fried egg rolls, won tons, crab puffs and sticky meats, the whole thing was artfully arranged to spotlight the most far-out feature of all–a flaming pot that smelled of Sterno and grease. Light years before searing, blackening or tableside grilling, the flame pot, of course, served no apparent purpose other than to piss off your dad when he tried to extinguish it with a napkin.

Such monstrosities of greasy goodness have all but gone out of fashion, but I still remember waiting in squirmy anticipation for the telltale click of a lighter and the little blue flame that represented something fantastic and extraordinary. When the platter arrived at our table, everyone grew hushed, awed at the sight. We knew we were about to eat something very special.

Sea, of course, doesn’t have a flaming Pu Pu Platter. As Sea is Thai rather than Chinese, and this not being the early ’80s, I’ll forgive them. They do, however, have something infinitely better and almost as fun to order: the Starters Parade.

This was the absolute must-try on my first visit to the new Petaluma restaurant. Open for about eight weeks, its bright exterior and hard-to-miss sign is a perfect match for the equally bright and funky Metro Hotel next door. Seems the neighborhood is quickly becoming a haven for the southernly hip, as evidenced by the live-work lofts going up just blocks away. Hotel? Thai restaurant? Lofts? This can only mean one thing: a wine bar isn’t far behind.

In the meantime, Sea is an exotic oasis in the mostly industrial neighborhood on the outskirts of Petaluma. After ordering a Thai iced tea, we couldn’t resist the quirkily named Starters Parade appetizer ($14). Incorporating the best of the restaurant’s modern Thai cuisine starters, it includes spring rolls, crispy prawns, chicken satay, fish cakes, mummy chicken and the “Little Basket”–crispy egg noodles tossed with a mixture of onions, cilantro, carrots and nuts.

Arriving at our table with a flourish as not a few heads turned, it was the Pu Pu Platter all over again (but without the flaming). Glasses were moved quickly aside, the platter taking up most of our small table. Little individual compartments held all sorts of condiments and sauces and–yum–lots of fried nibbles.

I waited for no man. Or Boy. A poorly timed trip to the bathroom will cost you dearly when you eat with me. And neither spring rolls nor fish cakes get better with exposure. So by the time the Boy was back from the water closet, I was halfway through the Parade.

Most fascinating were the mummy chicken (little bits of chicken wrapped in banana leaves) and fish cakes (made with red curry paste, kaffir lime leaves, fish and an array of other unknowns, deep fried and served with cucumber sauce). The texture of the latter ends up being slightly rubbery, rather than flaky, which is evidently the whole point. Dense and exotically fragrant, they are a wonder of edible consolidation.

Our other favorite was the Little Basket, a salad of fried egg noodles and finely julienned veggies. Fresh, crisp and with the Thai signature of sweet, spicy and salty all commingled, it was a refreshing foil to the oiliness of the other dishes.

The one disconcerting addition to many of the dishes was the kitchen’s use of salted mixed nuts. Now, I am no expert on the authentic use of nuts in Thai food; however, cracking open a can of Planters as garnish seems odd to me. The saltiness of the unchopped nuts really detracted from some of the dishes, and it didn’t help that I absolutely abhor Brazil nuts.

Having polished off the Parade in nearly no time, we were ready to explore the entrées, many of which tout the inclusion of wine and local produce. By simple geography, most restaurants west of, say, Idaho feel a need to tout both the use of wine in their dishes and the fact that most of their food is so spanking fresh and local that it practically came from the owner’s backyard. Sea is no exception, despite the fact that Merlot isn’t exactly native to Thailand and kaffir lime leaves are about as native to California as, well, Thais. Odd bedfellows, yes. But somehow it works.

As we prepared to order, the Boy wouldn’t be swayed from his choice of golden cashew chicken ($9), despite my heated suggestions otherwise. Determined to contribute to the review, he steadfastly insisted that, having eaten many a cashew nut chicken, this was his Thai dish of expertise.

Served piping hot, the chicken was in boneless little strips, rather than the painfully ubiquitous and rather slimy cubes one sometimes gets at other restaurants. That was a plus. A fair number of cashews and a small side salad were a plus as well. However, the sauce was somewhat bland and uninteresting, despite teasing us with promises of a honey glaze syrup. Not a honey or glaze in sight. We were both left a little disappointed, though I never have exceptionally high hopes for what seems to me to be the creamed chicken on toast of Asian cooking.

Conversely, my holy basil lamb ($16) was much more intriguing. Served in a Merlot and milk reduction sauce, it was luscious and beautifully plated with sliced red peppers. Whether the basil was holy, or even all that pious, I can’t say for certain, though it was rather divine with the zucchini dotting the plate.

The second trip, however, resulted in some of the most soul-satisfying dishes I’ve had in recent memory. As I always say to, well, anyone who pretends to listen, stick with what the chef knows best. And in a Thai restaurant, curry is almost never a bad choice. The red pumpkin curry ($10), with its creamy coconut milk base, chopped vegetables and slices of real pumpkin, didn’t disappoint. In fact, it also didn’t get shared. With anyone. The staff suggested adding shrimp, which was a perfect choice for the heat and creaminess of the curry, in addition to just looking so darned pretty in the pink sauce.

I can’t fail to mention the pad thai ($9), which I also ordered with chicken. A mainstay of American Thai restaurants, the portion was large, but lacked the hints of sweetness and pan-fried crunch that I like in my noodles. It was more overwhelmingly smoky and savory, with a little chicken and the odd mixed-nut concoction on the side. It was certainly more than passable, but paled in comparison to the pumpkin curry.

Also wonderful and worth a group nibble is the fried calamari ($7), which is served pommes frites-style in a paper-lined cup. Fresh desserts are featured on the kitchen blackboard and include banana fritters and sorbet.

With cozy benches, high bar tables, an open kitchen and large, showy displays of exotic flowers, Sea is far from the usual hole-in-the-wall restaurant, ending up more bistro than backstreet Bangkok. The smells, however, that waft from the kitchen and settle into the dining room in wave after wave may remind you a little of Bangkok–and not in a good way. Because while pleasing, mouth-watering and delightful before a heavy meal, a big sniff of fish as you’re eating dessert can be a little off-putting.

Then again, the waft of far-off lands and exotic cuisine can be a wonderful thing. Even when it isn’t a Pu Pu Platter.