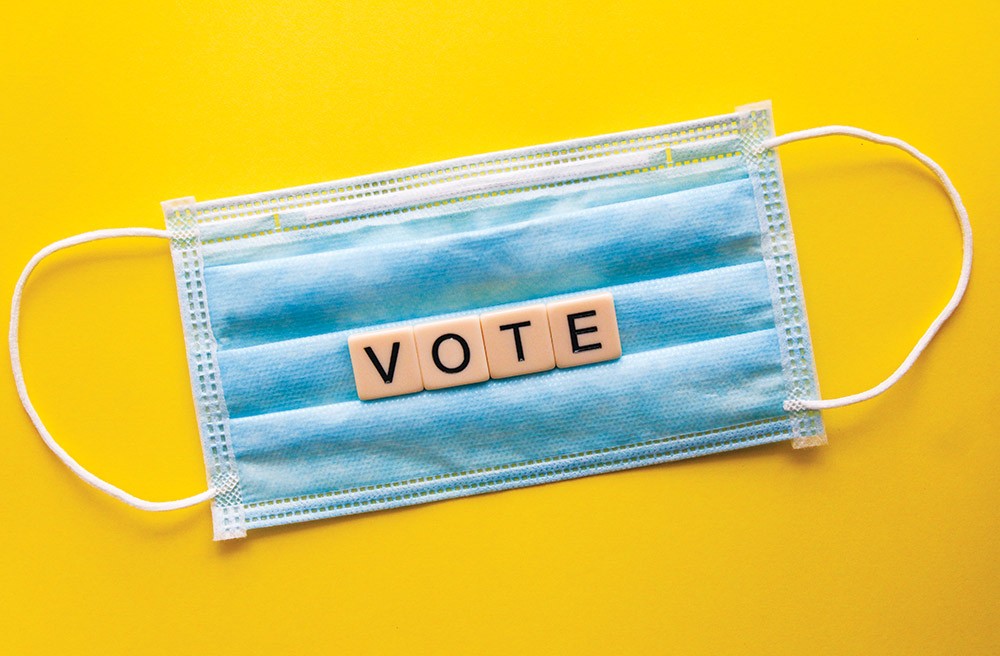 If social media chatter, yard signs and on-going street protests are any indication, many Sonoma County voters have been activated by local issues this year. In addition to selecting a new president and city councilmembers, voters will decide whether to extend a countywide transportation funding sales tax, to boost county spending on mental health care and to strengthen outside oversight of the Sonoma County Sheriff’s Office.

Although we can’t cover everything on the ballot, here are three items every Sonoma County voter will be asked to weigh in on.

Placed on the ballot by the Sonoma County Transportation Authority (SCTA), the county agency in charge of most local transportation projects, Measure DD would extend an existing ¼-cent sales tax measure until 2045, 20 years after the tax’s current sunset date in 2025.

If passed with a two-thirds vote, the measure would raise an estimated $26 million each year to fund road improvements and infrastructure projects throughout the county. The projects identified in the measure were compiled as a wishlist for the county’s cities, which will all receive Measure DD funds for their favored projects over the next 20 years.

Measure DD’s spending plan would allocate 65 percent of the funding towards fixing roads, filling potholes and improving road safety. The remainder of the funds would go towards increasing the frequency and affordability of bus service (23 percent) and building bikeways and pathways (12 percent).

The campaign funding behind the measure comes from the contractors who might stand to get work from the SCTA. So far, Ghilotti Brothers Contractors chipped in $2,500; the Northern Californian Engineering Contractors Association put up $7,500. The Sonoma County Alliance’s Political Action Committee also contributed $7,500 in support of Measure DD, according to a campaign finance filing.

The main opposition of Measure DD is a new anti-tax coalition known as the “2020 Tax Moratorium Coalition.” The Coalition has not disclosed any campaign spending yet.

The coalitions’ members include the Sonoma County Farm Bureau, North Bay Leadership Council, the North Coast Builders Exchange, the Santa Rosa Metro Chamber of Commerce, and Sonoma County Citizens for Action Now! The anti-tax group argues that because of the ongoing pandemic and resulting economic turndown, 2020 is the wrong year to increase taxes.

“There are four years remaining on the Measure M tax, so we don’t need to vote on a new tax now. Measure DD should come back in two years when the economy has hopefully improved” the group wrote in their argument against Measure DD.

While Measure O’s supporters primarily use a moral argument to support the tax increase, they and the initiative’s opponents also offer economic arguments. The 2020 Tax Moratorium Coalition also opposes Measure O, arguing that passing the tax would be financially irresponsible.

Measure O’s supporters disagree, proposing that increasing preventative care with Measure O funding could lower other costs in the long run. In their ballot argument supporters, including Congressman Mike Thompson and Supervisor Shirlee Zane, say that the funds generated by Measure O would “provide dedicated funding to ease the burden on emergency services and our healthcare systems, and keep those in need of mental health services out of the jail.”

Measure O’s ballot language does not specify how much money would go towards any particular program. Instead, the estimated $250 million the measure is expected to generate is split into five categories, with a percentage of the pie for each category.

The largest single chunk of the money—44 percent, or an estimated $11 million per year—would go towards the county’s Mobile Support Team and other crisis response services—including the county’s Crisis Stabilization Unit, longer-term residential crisis services and inpatient hospital services for adults.

Perhaps the most highly-anticipated measure on the ballot this year, Measure P would increase the power and funding given to the county’s Independent Office of Law Enforcement Review and Outreach (IOLERO). IOLERO was formed in 2016, several years after a Sonoma County Sheriff’s deputy killed 13-year-old Andy Lopez in a then-unincorporated area of Santa Rosa.

If passed, Measure P would more than double IOLERO’s budget and empower the office with additional abilities, including the power to force the Sheriff’s Office to release certain documents to IOLERO.

The fight over Measure P is a microcosm of the ongoing debate about the role of law enforcement in America. The campaigns supporting and opposing Measure P have tapped into images and language associated with the nationwide protest movement, which reached its peak this summer. For instance, while the “Yes” campaign’s website features pictures of Breonna Taylor and George Floyd, the “No” campaign’s website claims that Measure P would “defund our deputies,” a reference to the protesters’ call to “defund the police.”

If passed, Measure P would lock in IOLERO’s budget at one percent of the Sheriff’s Office total budget, which was $184 million in the 2019-2020 budget, compared to IOLERO’s $598,793 budget. As a result, IOLERO’s budget would be increased to $1.84 million, an additional expense of $1.25 million. However, the additional funds would come from the county’s General Fund, not directly from the Sheriff’s Office.

Still, the law enforcement union officials opposing Measure P have claimed that Measure P would increase the cost of compliance by forcing the Sheriff’s Office to set aside more funding to redact videos before releasing them to IOLERO. Those additional costs are not mentioned in the County Auditor’s Fiscal Impact analysis of Measure P.

Instead, Measure P’s supporters argue that strengthened law enforcement oversight could lead to significantly lower costs for the county over the long run by reducing the number of costly civil rights lawsuits which are regularly brought against the Sheriff’s Office. In recent years, the costs associated with those lawsuits have ballooned, causing the county’s insurance premiums to increase as well.

Supporters of IOLERO have long argued that the independent body is too underfunded and weak to provide a meaningful check to the county’s largest law enforcement agency. But, until the summer’s nationwide racial justice movement helped to bring hundreds of new activists to the issue of local police oversight, the county’s Board of Supervisors were hesitant to add Measure P to the ballot.

Ultimately, they only added Measure P to the ballot in early August after dozens of residents called into numerous public Zoom meetings in support of increased law enforcement oversight.

The decision angered the unions who represent Sheriff’s Department employees, who have argued that the supervisor’s decision was too hasty. However, the majority of other regional politicians—including four of five members of the Board of Supervisors, both U.S. Congressmen who represent Sonoma County, and numerous state-level politicians—now support Measure P, signalling a shift in political will which would have likely been impossible prior to the local racial justice movement this summer.

In addition to the grassroots support, the pro Measure P campaign had raised $81,352 by Sept. 19. According to more recent campaign finance reports which record large contributions, the “Yes on P” campaign has continued to rake in cash since then. The next summary reports are due on Thursday, Oct. 22, after the Bohemian’s print deadline.

Meanwhile, despite branding themselves the “Committee for Transparent Justice,” the “No on P” campaign has been slow to file any campaign finance disclosures with the county or state, making it unclear exactly who exactly is paying the campaign’s bills.

In early October, the “No on P” campaign launched a website, Facebook page and started distributing large yard signs. The campaign’s main non-law enforcement ally appears to be the Sonoma County Farm Bureau, which has been distributing “No on P” signs to its members for the past few weeks.

The Sheriff’s Office and the Farm Bureau have a natural connection: The Sheriff is tasked with enforcing laws in the county’s rural areas, where most of the Farm Bureau’s members’ interests lie. And, based on recent Bureau blog posts, it seems the group is happy with Sheriff Mark Essick’s job performance.

In a July 2019 blog post, the Bureau’s president thanked Essick and the Sheriff’s Office for arresting 98 animal rights activists at a Petaluma chicken farm the previous month. The protesters, who were trespassing on the McCoy Chicken Farm, have argued that local and state law enforcement are not properly investigating and enforcing alleged cases of animal cruelty.

This July, the group awarded Essick its “Friend of Farm Bureau Award” for leading an agency which has been “instrumental in preventing and solving rural crimes in agriculture and also protecting farms from the animal activists who have infiltrated our county.”

Not all farmers are opposed to Measure P, of course. In response to the recent rise of “Farmers Say No on Measure P” signs around the county, the Sonoma County Chapter of the Community Alliance of Family Farmers (CAFF) felt compelled to announce their support for Measure P.

“When folks started inquiring with us last week, asking why farmers were so adamantly opposed to this measure, we felt the need to set the record straight,” Wendy Krupnick, the president of CAFF’s local chapter, is quoted as saying in an Oct. 19 blog post. “Firstly, no one can speak for all farmers. But I can tell you this: there are a lot of local food producers in Sonoma County, like me, who believe that when it comes to law enforcement, transparency and community participation matter.”

Check Bohemian.com for information about the statewide propositions on this year’s ballot.

Next ArticleProp the Vote: A Cheat Sheet to California’s Statewide Ballot Measures