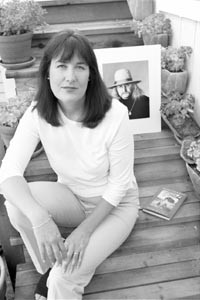 IANTHE BRAUTIGAN Swensen was 24 in the fall of 1984 when she enrolled in a writing class at Santa Rosa Junior College. On Oct. 25 of that year, the body of her father, author Richard Brautigan, was found in a house in Bolinas beside a bottle of alcohol and a .44 Magnum. He was 49 years old.

It was in the class, taught by Sonoma County Poet Laureate Don Emblen, that Ianthe first began to write about her father’s suicide. “For whatever reason, experiences were happening in my life that were so large they couldn’t be contained in my body,” she remembers. “So I started writing.”

The journey she began that fall would find its way into print this past spring, 16 years later, with the publication of her first book. You Can’t Catch Death (St. Martin’s Press; $21.95) is a memoir of Richard Brautigan’s life and of the aftermath of his death, as seen through the eyes of his only child. It is a haunting, perceptive portrait of a man whose great talent as a writer was shadowed by alcoholism and the ghosts of his past.

“There was a point when I realized that [I could] write about my dad using techniques of fiction,” Ianthe says. “It felt almost easier to get to the material that way. When you write in your journal, or at least when I do, I’m complaining about things. But if you’re telling your story in a more amplified way, all that drops away.”

Ianthe now lives in Santa Rosa with her husband, producer/director Paul Swensen, and their 14-year-old daughter, Elizabeth. Ever since You Can’t Catch Death was released in May, she has been busy doing interviews and readings from the book.

“I didn’t anticipate the enormous freedom that I would feel,” she says. “The problem with suicide is that there’s so much shame associated with it. When all the words were finally out there, it was like, OK, this is a good thing. Shame has an enormous amount of power over you.”

Ianthe’s first reading was in Santa Rosa at Copperfield’s Books, where she is a part-time employee. The reception she received astounded her. “People have been giving me gifts,” she says. “I get people who are interested in the book because they have some relation to suicide. Then there’s a big constituency that’s my dad’s, and they’re all so welcoming and excited to see me. I’ve not had one nut.”

Richard Brautigan vaulted to fame in 1967 with the publication of his second novel, Trout Fishing in America. Written in a kaleidoscopic, deadpan-absurdist style that confounded critics and academics, the book caught on with the counterculture movement and became hugely successful, eventually selling several million copies around the world.

His other early books, A Confederate General from Big Sur, In Watermelon Sugar, and The Pill versus the Springhill Mine Disaster, also became popular, especially with college students. Early in his career he was labeled “the last of the Beats,” an association that stuck with him long after he left the Bay Area and moved to a ranch in Montana. By the time of his death, he had published 10 novels, nine volumes of poetry, and a collection of short stories.

But for all the popular acclaim, Brautigan was never accepted by the American literary establishment. It may have been his popularity, in fact, that prompted many critics to write him off as a temporary phenomenon.

“His style is very literary, but it’s also very accessible,” Ianthe says. “I think we have confused accessibility with being nonliterary. In France, he’s revered, and they write books of criticism about him. And he’s appreciated in Germany and places like that. But here, he’s still a secret, very word-of-mouth.”

After she finished You Can’t Catch Death, Ianthe discovered among her father’s papers a manuscript that had been completed before his death, but never published. It was released concurrently with the memoir, under the title An Unfortunate Woman (St. Martin’s Press; $17.95).

“There are parts of the book that are painful to me and will always be really painful, but when I look at them now, it’s so much easier,” Ianthe says.

The novel–which has been both praised and panned by critics–is written as an apparently haphazard pastiche of journal entries. Many of the events described in the book closely mirror events in Brautigan’s own life. One passage reads, in part: “One of the letters I got today was from my daughter. . . . She got married last year and I disapproved of the marriage and things have been strained ever since then between us . . . . She and I were very close until she got married. Now our communication is minimal and strained. Perhaps I should bend a little. I don’t know.”

The passage was written in 1982, a year after Ianthe, then 21, got married despite her father’s angry opposition. “It was the first time we had really disagreed on anything,” she remembers. “And it came at a bad time for him, emotionally. He was not equipped for a disagreement. [In the past] I had pretty much acclimated myself to whatever his thing was, whatever he wanted.

“Now that I’m older . . . ,” she pauses. “My husband and I lucked out, and we’ve been married 18 years, which is phenomenal. But I would not be thrilled if my daughter wanted to get married at 21.”

Ianthe remembers a father who was both protective and permissive.

“Even though he was quote-unquote a bohemian, even though he was not monogamous, there was a real moral dimension to him,” she says. “But it didn’t involve exterior rules; it had to do with common sense and respecting people.

“I went to Haight-Ashbury as a 7-year-old with him, and we’d meet up with the Diggers, and they would have these big free dinners,” she continues. “But as soon as the whole scene changed and got weird and violent, he stopped taking me there. He kept me very compartmentalized.”

In the wake of Brautigan’s death, newspapers and magazines from around the country had a go at his obituary. For the most part, Ianthe says, they got it wrong.

“I think that suicide terrifies people so much that they have to come up with really easy answers,” she says. “The thing about the press is, you’re kind of framed before you even start. People wrote things like: ‘Richard Brautigan, onetime ’60s icon, loses fame, loses fan base, kills himself.’ They were sending him up, and then they threw in Trout Fishing, and that was basically the story.”

Because there was so much more to the story than fame and death, Ianthe decided to add her own perspective. Both her father’s life and his writing, she felt, deserved more than a cursory glance.

“Whenever I read my dad’s stuff, there’s always the sense of somebody alone, walking down the street,” she says. “I see the shadow in everything, and the loneliness, and the hauntedness. But he always leaves you with something.