In the tiny northern town of Geyserville, Santi has created a rare destination. We can only compose a love letter 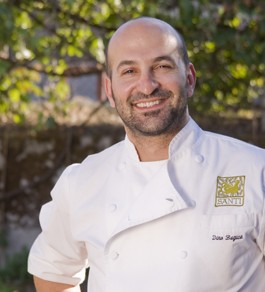 The population of Geyserville is 2,100 souls, give or take various seasonal winery workers or the random off-the-grid types drawn to this bucolic northern Sonoma County burg where, if one sneezes while driving into its downtown, one can miss the entire expanse of a dozen shops, the fire station and post office.

Except after 5:30pm on Friday and Saturday nights, when the numbers swell to 2,500 or more.

As the dinner hour beckons, limousines pull up in front of Taverna Santi on the main street, unloading resort-garbed visitors with faces flushed from daylong winetastings. Shiny SUVs and carefully scrubbed pickup trucks navigate parking spaces for their occupants, well-heeled locals who’ve traded their rumpled vineyard workaday dungarees for pressed jeans, polished cowboy boots and designer fleece. Rental cars crawl in, carrying tourists who’ve trekked from as far away as San Francisco and now peer cautiously out of their vehicle windows, wondering if the small metal sign cut with a filigree rooster is the beacon they’re looking for.

By 5:45pm, there’s a crush of hungry bodies spilling out of Santi’s front door up and down the narrow sidewalk, lining up for a seat at one of the white cloth-covered tables within.

Most are savvy enough to have made reservations far in advance, and are quickly led to tables in the two dining rooms of rustic exposed brick and buttery lemon painted walls; enough others are hoping to score last-minute space at the small bar or half-dozen communal “travelers tables” in the entry that it’s a push to make it through the throng to the hostess stand.

Whoever they are, however they got here, they’ve come for handmade, authentic Old World Italian fare, celebrating seasonal, local ingredients so fresh that produce and herbs are plucked, as much as a tiny and unpredictable harvest allows, from a small garden banking the trellised patio out back of the restaurant. They’ve made a pilgrimage for founding chef Franco Dunn and executive chef Dino Bugica’s pan-roasted pork tenderloin with slow-roasted pork belly, sautéed broccolini and potato purée in pork jus; house-made beef tripe braised with borlotti beans and garlic fettunta; and the daily cornucopia of handcrafted pastas, olives, salumi, sausages, gelato and even liqueurs that hold true to painstaking European artisan style.

They’re here for a wine list of almost 200 coveted selections from the boutique vineyards of the surrounding Alexander, Dry Creek and Russian River valleys. Many guests are winemakers themselves, a who’s who of the industry that have made a favorite of the rustic taverna as much for a casual meal of lasagna with Calabrian meatballs as for a complicated breasola decorated with Black Mission figs, Moliterno cheese, arugula and white truffle oil.

As the dining rooms bulge with glowing guests and the cash register rings up easy tabs of $75 per person, Santi—which means “saint” in Italian—appears a seamless, obvious success, effortless in its rustic-chic charm.

Yet for owner Doug Swett, it’s been a calculated acquisition of an enormously labor-intensive operation, and the slow but ceaseless grooming of its growth from a simple out-of-the-way cafe to a world-class destination.

Swett, who grew up in Sonoma and worked in various wine country resort restaurants, had recently returned to the county after seven years enmeshed in the Wolfgang Puck empire as manager of its portfolio of Italian eateries. After opening an eighth restaurant in Los Angeles, “It was time to come home,” Swett says matter-of-factly. “I missed Sonoma.”

When Santi first opened in 2000, it was as a joint venture by two former winery chefs with a dream, Thomas Oden and Franco Dunn. By 2001, their fledgling business crippled from 9-11, the chefs found little joy in the daily running of a restaurant and wanted to focus on their cooking. Swett saw a remarkable opportunity in the rough, and jumped at the offer to become general manager.

“Financially, [Santi] was severely hit by [the Sept. 11 attacks] and never fully recovered,” Swett explains. “The reputation locally was solid but not spectacular, and there were clearly things that had to be fixed. It became obvious that the set-up they had established was not going to work.”

In early 2005, he bought out the owners, retaining Dunn, as chef emeritus, and the 28-year-old, up-and-coming executive chef Dino Bugica, who joined the team in 2003.

As his first course of business, Swett invested in the chefs’ talents. Both are classic, Italian-trained artists of a peasant palate that relies on humble meats, obscure items like black cabbage and chestnuts, young chickens cooked under bricks, rough ragus slow-cooked to savory velvet and sumptuous exclamations like toasted anise shortbread under sambuca-infused whipped cream. So Swett sends them to Italy several times a year to refresh and expand upon their skills.

“Any restaurant is a risk, but this was definitely a calculated one,” he says of his leap of faith. “I felt like the food needed to come up a notch, and there had to be a better business plan and model in place, but ultimately it had a good chance of succeeding.”

He gradually changed the menu from being relatively fixed to changing every several weeks to being updated daily and fancied with an elaborate slew of specials fed by local farmers, the seasons and the traditions of the Italian culinary calendar.

He elaborated on the established seasonal tasting menus and added winemaker dinners plus a wildly popular Wednesday locals night, featuring dinners like succulent herb-roasted leg of lamb, Sicilian meatballs and mashed potatoes, or pork cotelletta with corn and sweet onions for a reasonable $18, including a house salad of local greens. He rounded out the in-house banquet functions with a full-service catering department, and began stocking Santi’s signature sausages, homemade spice rubs, barbecue sauce and other specialties for sale at Healdsburg’s Saturday morning farmers market.

Last summer, he added live jazz performances on the patio Sundays through the warm months. This January, he introduced the Supper Club, offering family-style communal dinners the last Sunday of each month, and in March began lunch service Wednesday through Friday.

Swett is the first to admit that it’s been a battle; he jokingly describes Santi to a visitor as being an “albatross around my neck,” but it looks like it’s paid off.

At a recent dinner, Swett greets a guest with a proud display of the oversized portrait of a bar scene that hangs on the wall next to the host stand. It’s an ancient shot of Catelli’s the Rex, a bar that for decades occupied the 1902 building that now houses Santi. Dusty and sun-worn, wearing overalls and broad brimmed hats, happy imbibers smile at the camera. The bartender serving them, long-retired and now in his 90s, remains a regular and holds court at a big, curved booth just inside the restaurant’s weathered wooden doors.

I have foolishly arrived without a reservation, and no private tables are available, but space is made at a travelers table, sharing with two other patrons what turns out to be a lovely evening of conversation and camaraderie.

The waiter lauds the oft-requested moscardini con patate as “amazing,” and he’s right. A quartet of whole baby octopus lie like cartoon dolls in the dish, deeply purple and likely having met their demise from being massaged to death by chef Bugica. Braised in red wine with tomato, garlic, black olives, herbs and diced potato, their juices soak into grilled crostone for a crunchy sog of salty tartness, gently chewy tentacles and buttery body.

The rest of the meal comes from the evening’s specials, and they shine as some of the finest Italian food to be found in northern California. Aromas of fresh earth and ocean waft from a hot cast-iron skillet glistening with silvery house-cured anchovy fillets, sharply tart roasted gypsy peppers, caramelized cauliflower and a thick mantle of toasted breadcrumbs. Monkfish is prepared osso bucco style (bone-in and braised) with finely diced tomato, battuta (typically onion-garlic-fatback), white wine and herbs over potato risotto (the little cubes cooked to beguiling silk in cream) sprinkled in an unexpected accent of pomegranate seeds. A fat slab of monkfish liver shimmers atop in a decadent display of pumpkin-colored organ meat.

The chefs make their own gnocchi, and tonight the tiny velvety dumplings come layered with chanterelles, crimini, porcini, oyster mushrooms and a dusky confit of duck hearts and gizzards bathed in a richly aromatic broth.

Desserts are equally sublime, with a Meyer lemon tart like a small slab of pie with its soft, toasted pine-nut crust, dollop of unsweetened cream and shock of tiny sweet-tart huckleberries in thick purple syrup. A slippery round of silky panna cotta studded with almonds arrives smothered in Black Mission figs from Santi’s garden.

Santi “is finally achieving what it’s potential always had,” Swett says, and it’s time for him to turn his attention to something new. In January, he will take another gamble on Geyserville, with the opening of Diavola in the former Geyser Smokehouse just a few doors down. It will be another homecoming of sorts, with Bugica in charge of the kitchen and Oden returning as an investor in the new LLC.

The trattoria will be more casual, set amid aged brick walls and rustic wooden floors and focusing on Bugica’s artisan wood-oven-baked thin-crust pizzas, simple roasts such as porchetta and quick bites like sautéed peppers. A small retail counter will offer house-cured meats and salumi, breads, soups, salads and cheeses.

Tonight, meanwhile, the population surge lasts until about 10pm, when—poof!—the sojourners disappear, the streetlights click off and the town slides back into its dusty slumber. The limos are gone; the tiny lot across the street will re-open in the morning, offering its shiny red and green tractors for sale, and the mercantile will sell its paint, hardware and fencing supplies.

And behind the rugged, terra cotta walls of Santi, Swett, Dunn, Bugica and crew will be quietly working their magic to bring it all to life again less than 24 hours later.