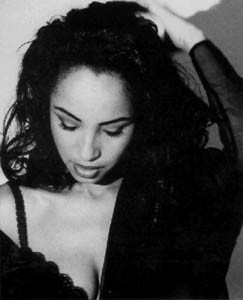 Sade alters the atmosphere around her listeners

MUSIC, some wag once said, is the only art form that its followers don’t need to study to appreciate. And it’s true: all of us know things about music that we didn’t learn in school. We know, for example, that all times and places have a soundtrack of their own. I, for instance, wouldn’t want to hear the Rage Against the Machine first thing in the morning–or even in the middle of the night. There is morning music, afternoon music, and evening music.

But the best kind of music is so supple, so transcendent, that it colors the air around it, transforming whatever the day holds into an entirely different plane, turning, for instance, a slow morning into a sexy one, or a wistful evening into a night full of hope.

Such a quality is rare indeed in the pop world, but one does occasionally come across it–in the music of English blues singer Sade, for example. Sade’s voice is thin and wispy, her music is rather quiet, but if you let her into your living room, I guarantee that the atmosphere will alter–and, to my mind, for the better.

Her music has the exact quality that T. S. Eliot referred to in his poem The Love Song of J. Alfred Prufrock, when he wrote, “I know the voices dying with a dying fall/ beneath the music from a farther room.” When Sade sings, it sounds as if someone is humming a tune in a meadow nearby–or, to quote the album’s title cut, “the music in the man’s car next to me.”

Sade is not, however, a prolific artist. Reclusive is more like it. Lover’s Rock (Sony) is her first LP in eight years–her fifth in 15–and this paucity of output (along with her poise and beauty) is part of her perfection. She doesn’t overdo anything, including her presence on the pop scene, with the result that when she does show up, one feels oddly relieved.

Lover’s Rock isn’t full of songs about Caribbean gangsters and scenes of renunciation. Instead, it relies on pure emotion and statements of intent: “You are the lover’s rock/ that I cling to.” Musically, the songs on Lover’s Rock recall numbers like “Sweetest Taboo” and “(Love Is) Stronger than Pride,” but there is something soothing about them that goes beyond the album’s smooth, mellow-jazz surface qualities.

In a way, Lover’s Rock contains elements of artists like Portishead and Dido, but in fact, Sade’s roots are much more in the blues than in techno–the English blues, that is. Indeed, the opening track, “By Your Side,” sounds remarkably like a song by Eric Clapton (if Clapton could sing better).

And the other songs have a similar slow-hand groove, albeit one with extremely subtle instrumental touches: an acoustic guitar chord here, a faint flavor of horns or strings there, some light percussion. “Flow” could almost be called repetitive or even monotonous, if it weren’t for Sade’s emotional intensity.

“Somebody Already Broke My Heart” is typical of Sade’s oeuvre, a subtle song about the pain of love. “King of Sorrow,” in which she sighs, “I have already paid for all my future sins,” is equally downbeat. But that’s what the blues are all about: lightening others’ loads by sharing one’s own pain. As Sade sings herself on the final cut, “Love is kind, and love can give . . . it’s only love that gets you through.”

That’s been her (highly romantic) stance all along, and she’s obviously going to stick to it.

Of course, the blues are normally associated with African Americans. Sade (a.k.a. Helen Folasade Adu) is black but of Nigerian descent. She grew up in England, and her version of the blues diverges quite a bit from the traditional form we most often associate with the idiom. There are no seven- or 12-bar blues here, no high, intricate vocalizing à la Aretha Franklin or Etta James.

Sade’s blues are just as blue, but they’re a cool blue, a new blue, if you will, invented and nurtured in London in the ’80s. Sade lives an immensely private life, but she doesn’t worry about sounding inauthentic or losing face for not having “lived the blues,” because her personal blues have nothing to do with heroin use, jail time, or sharecropping.

On the other hand, no one’s ever going to question Sade’s blues credentials. Her songs are as blue as one could wish and, as such, uplifting in their way. Combined with her monumental vocal poise, her sweet and tender songs, and her extreme beauty, she is, simply put, an artist of great dignity and merit–and an artist with whom one enjoys spending time, morning, noon, and night.