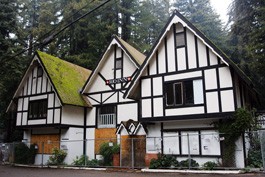 That concise slogan—a curt blend of goofy-sweet nostalgia and well-meaning optimism—once greeted all visitors to the onetime vacation resort of Rio Nido, where the three promising words stretched across a sign at the entrance of this tiny river town. The glory days of Rio Nido appear to be long gone, but memories from the 1930s and ’40s—when the world’s greatest big bands played for those who came from all over to swim, dance and fall in love—do linger, although most of those carrying them are now in their 70s and 80s.

Many still recall the old wooden dance floor that stood over the river, lit at night by bonfires on the beach. They remember the names that once appeared on posters all over Sonoma County: Harry James, Woody Herman, Ozzie Nelson, Buddy Rogers. More often than not, standing at the shady, tree-lined geographic center of those lingering memories is the Rio Nido Lodge.

“In ’43, ’44, ’45, my girlfriends and I used to go out there as a group, which was the best way to go—a great big group of girls,” says MaryEvelyn Panttaja, retired schoolteacher and Analy High School graduate, class of ’44. Born and raised in Sebastopol, Panttaja fondly remembers summer nights during the war, bouncing along the unpaved country road out to Rio Nido, driving on rationed gas toward an assortment of eager young men always waiting for a dance.

The war years, Panttaja recalls, were a confusing and fearful time, with many of her closest Japanese friends suddenly sent away to internment camps. The promise of an evening’s entertainment out on the river was eagerly awaited as an antidote to widespread sadness and uncertainty.

“If you went up to Rio Nido on a Saturday night,” Panttaja says, “it was always much more fun not to go with a date. Of course, we were mainly into the bands. We saw Stan Kenton! We saw both Dorseys. Sometimes, we would stand in front of the stage and just listen all night. Rio Nido was such a magical place, a very important place to so many of us.”

But the hard realities of a changing world have transformed Rio Nido into a still-charming but definitely not bustling community, with concerns about crime, economy and a lack of local jobs. Meanwhile, passing from owner to owner, the lodge—a charmingly ramshackle place with chateau-style architecture, a moss-covered roof shaped in a series of rain-repelling peaks and a grove of towering redwoods clustered all around—has suffered the most over the last decade. Mismanaged and allowed to fall apart, the place rapidly became a haven for drug dealers, prostitution and other criminal activity.

“It was really bad,” says Rio Nido homeowner Elizabeth Parker, who writes about the town in the entertainingly opinionated online blog Russian River Rattina. “The last owner, Jim Friedman, did try at first to fix the place up and to run it as an inn, but then—I think it was mainly after the floods—he seemed to just give up. The place just completely went to hell. He started renting to a lot of parolees from San Quentin, where he supposedly worked as a psychologist, and he made rooms available to people coming out of prison. That was the death knell.”

According to Parker, many units had no running water because thieves had stolen the copper piping. Discarded needles could be found across the grounds. Soon, the entire Rio Nido community saw the local crime rate increase. “There were all these stories,” Parker continues, “stories of kids sitting on the step in front of a room while their mother was inside earning her next fix. There were tweakers all over the place. It was pretty obvious. It was so sad.”

But now, the identity of the Lodge appears to be changing . . . again.

Into what is not yet clear.

The change began two years ago, when Friedman lost the property to foreclosure. The building was boarded up and surrounded by a chain-link fence, occupied only by squirrels and squatters. Its only remaining assets, its physical charm and remaining historical significance, were fading faster than a foxtrot. A series of potential buyers looked at the place but immediately disappeared.

Then Sonoma County developer Dennis Judd appeared on the scene. “The architecture of that building has always attracted me,” admits Judd, who purchased the property last fall at auction reportedly for just over a quarter-million dollars. Judd, who has a history of purchasing and rehabilitating troubled properties, has lived in Sebastopol since 1986. “I never really knew Rio Nido very well,” he says, “but I always found the Lodge to be an attractive building. So when the opportunity came and it went on the market again, I started investigating it. I like fixing up old buildings. I like to bring new life back into them. And I like it when that brings new life back into a community.”

Though Judd initially knew little history of the building, he’s learned a lot in the last year. Former owners and nearby residents have brought him boxes of memorabilia: photos, posters, newspaper clippings. What originally seemed to be an architecturally appealing fixer-upper soon became something much more: a symbol of youth and innocence, thick with cherished memories.

“And it’s not just people in Sonoma County who remember the lodge fondly,” Judd acknowledges. “It’s not even just in the Bay Area. Memories of Rio Nido have spread all over. I was at a conference in San Diego and I happened to mention the Rio Nido Lodge, and one of the people there, an older gentleman, said, ‘You know, I remember going there. It was a really special place. It was the class act of the North Bay!'”

After purchasing the Lodge, while the job of cleaning the place up began, Judd started meeting with area residents, brainstorming about what they’d like to see happen to the place. The first such meetings were contentious and high-spirited.

“It was clear to me,” Judd says, “that what had been going on there had devastated the community, and it wasn’t just the Lodge that had become run-down. There were overgrown pathways and graffiti all over. It became obvious that this project isn’t just about coming in and rehabilitating the Lodge. That wasn’t enough. I suggested that the community, to a degree, needed to be rehabilitated, too. That’s not in my power to do. The community has to do that.”

Little by little, those changes are taking place. Though much of the Lodge is still unoccupied, Judd has been gradually renovating it piece by piece, with major new improvements getting ready to be implemented. Last fall, the Pegasus Theater Company—nomadic since losing its longtime site in Monte Rio—took over the back portion, converting it into a small theater.

Since moving to the new Lodge theater, attendance has reportedly been better than it’s been in years for Pegasus, with audiences from all over the Russian River once again trekking to the Lodge for an evening of entertainment. That should only increase with the show Pegasus opens this weekend: It’s a Wonderful Life: A Staged Radio Play with Music, taking place in the 1940s as Hollywood royalty drop by for the holidays. In the play, the Rio Nido Lodge plays itself; one could say it’s the star of the show.

“I think Dennis Judd has been good for the community,” says Parker. “There are people worried about him, as a developer, afraid that he might put affordable housing in. But the truth is, he does manage his properties. He takes care of them, and he does have a vision for the Rio Nido Lodge. In my view, anything he does with it is better than what was there before.”

Most residents seem to agree. “Rio Nido is one of the most beautiful places in the world,” asserts Judd, “with the incredible redwoods and the Russian River. It’s a gorgeous spot, and the Lodge is a great building—it just hasn’t been utilized to its fullest potential in a long, long time. My hope is that, one way or another, the Rio Nido Lodge will be a place for people to come and heal, just as the town of Rio Nido is healing itself.”