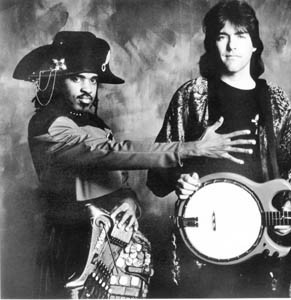 “THERE’S an ancient, ancient myth that is very, very cool,” reveals the musician-inventor-scientist-composer known as Futureman. His expressive, energetic voice is being channeled through the telephone from somewhere on the East Coast, where the eccentric percussionist has been touring with the jazz-bluegrass-fusion quartet Bela Fleck and the Flecktones.

Born under the name of Roy Wooten (his typically bizarre bio says he arrived on this planet on Oct. 30, 2050), Futureman provides the offbeat beats for one of the music world’s most unconventional ensembles.

Fresh from their recent Grammy win for best jazz recording, Bela Fleck and the Flecktones have been riding a new peak of success on a wave that started with their formation over 10 years ago.

This morning, however, what Futureman’s got on his mind is . . . well . . . Futureman apparently has a lot of things on his very imaginative mind.

“What this ancient myth says is this,” Futureman explains. “If you stand before a statue and play perfect golden ratios, you will bring the statue to life. Now, myth is a mirror we hold up to ourselves, to show us an archetypal principle.

Sensing that his listener doesn’t know what the hell he’s talking about, Futureman laughs.

“Stand up,” he says, “and let your arms hang to your side with your fingers pointed to the ground. If you measure the distance from your fingertip to the floor, that’s 1, and then measure from your fingertip to your head, that’s 1.618. That’s the perfect golden ratio. Measure from your chin to your nose, then your nose to the top of your head, that’s 1 to 1.618. And so forth and so on. The body uses this over and over. So what if we are animated by this principle that is so fundamental to our architecture?”

There is no easy way to describe the music of Bela Fleck and the Flecktones. Innovators of the highest order, they blend sounds and styles that have no business being heard together. And yet, once played, the music sounds as if it was always meant to be performed that way.

The band’s live gigs have won special acclaim because the prolific foursome are constantly finding new ways to play. “We’re coming up with new music every day,” Futureman says. “So onstage you’ll hear stuff that is only a few days old. It excites me.”

Futureman knows a thing or two about how to work a crowd. He’s a conscientious backup performer, but when he has the spotlight, he goes into a frenzy, playing his invented instruments (including the drumitar, which basically puts a drum kit into a guitar) and strutting and jumping around the stage like a man possessed. And he sometimes shares his ideas with the audience during shows, going off on rambling monologues that have been known to compel his bandmates to leave the stage for a break.

But performing with Fleck is not enough for Futureman. His immediate plans are to help bring about nothing less than a new spurt of human evolution.

His recent all-star percussion camp–which recently drew some of the grand masters of the drum community to the Nashville area–was one major step along the way. Drums, Futureman says, have always been a part of the evolutionary process. How so? Futureman’s explanation, as hypnotic and brain bending as the final round of a poetry slam, is not a short one.

“The connection between drums and evolution is this,” he says. “As a percussionist, as a drummer, I’m actually seeing the drum set a little differently than as a mere drum set. I see the drum set as a piano, and I see the piano as a drum set.

“What I mean is,” he continues, “when you follow the arc from the very first beat on the very first log drum all the way up to the sophistication of the modern drum set–which is an attempt to put all the parade drums together for one person to access–that’s a profound arrival.

“Now I see that as part of an evolution that goes all the way back to the piano, which is a percussion instrument in its harmonic context, in the sense that there are so many choices and they’re all hammered events,” he concludes. “I see the piano as an extension of the drum set.”

Evidently evolution sometimes needs a little help. To lend a hand, Futureman has accommodated by inventing a whole new kind of instrument that splices together a drum set and a piano. Called the RoyEl, its keyboard was designed to represent the periodic table of elements, and Futureman has already begun to compose evolutionary music. He describes these compositions as “transcendental hymns” and has now completed an entire album of this music, titled Evolution d’Amour. But this musical evolution will have to wait, because Futureman isn’t ready to release it yet.

“In the whole scheme of things, I see this album as volume 7,” he says. “I have this album done, but the record I have out now, The Seamless Script, is the one I think of as volume 1. Volume 1 is going to lead back up to volume 7. Like the Star Wars movies.”

Futureman’s excitement is contagious. Just listening to him talk about the power of rhythm is enough to make a person want to dance.

“Rhythm is fundamental,” he says. “Everyone has to find his rhythm, like Michael Jordan talks about finding his rhythm on the basketball court, or Muhammad Ali talks about getting his rhythm going in the ring. He ‘float[s] like a butterfly, sting[s] like a bee.’ He’s groovin’, he’s shufflin’. ‘What are you gonna do, champ?’ ‘I’m gonna dance. I’m gonna dance. We’re gonna get a rhythm. We’re gonna get groovy with this thing!’

“We talk about Bruce Lee, a martial artist, who would sit for hours listening to Indian rhythms,” Futureman continues. “Why? Because he was partaking of their understanding of mathematics. They could break rhythm. Bruce Lee was working with something called broken time, because in sparring with someone, he said, even if he were your equal, you can set him up, lure him into a rhythm, and then break the rhythm to create your opening. But it’s all off of the rhythm.