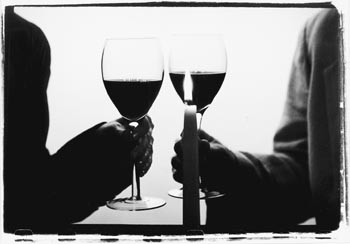 Roses Are Red, Violets Are Blue, This Wine Is Great, and So Are You: You don’t have to be a poet to laud a night of love.

AS A SINGLE DAD for more than a dozen years, it has been a long time since I’ve done any serious dating. When it comes to romance, I’m more than a bit rusty. In order to obtain some truly useful information for a report on romantic wines–in honor of the February romance ritual known as Valentine’s Day–I called upon a female acquaintance for counsel.

“What,” I asked her, “is your idea of the perfect romantic date?”

“Hmm,” she hummed. “We’d get dressed up and go out to dinner–not to eat, but to dine. We’d have some good conversation, some good food, some good red wine, and then, later on … well, you know.”

Of course, I know. I may not have been dating much lately, but I’m not dead. After the dressing up, the good conversation, and the good food would come … good dessert!

But back to the good wine.

Without question, a romantic dinner is one of those occasions that cries out for wine. And not just any wine. If you’re trying to impress a date, this is the time for red wine.

Fortunately, red wine isn’t hard to find. It’s produced in virtually every wine-growing region around the world, although the quality lessens as the climate grows cooler. In Italy, where some of the world’s most romantic men reside (so I’m told by the aforementioned female friend), a red wine is called rosso. In France, it’s rouge. And in Spain, it’s tinto.

The United States makes its fair share of red wine, too, with most answering to the name of a varietal grape: cabernet sauvignon, merlot, zinfandel, and so on. And some of America’s finest red wine is vinified in Sonoma County.

In fact, one of the most highly sought-after cabernets in the world is the Alexander Valley bottling from Silver Oak. Other outstanding Alexander Valley cabs come from Jordan, Geyser Peak, Chateau Souverain, Simi, and Clos du Bois.

In the mood for merlot? You can’t go wrong with Sonoma County bottlings from St. Francis, Matanzas Creek, Chateau Souverain, or Armida.

No, you don’t have to go “over the hill” to find world-class bottlings. More good news: If you’re a romantic on a budget, red wines of comparable quality from Sonoma County typically cost less–sometimes much less–than their Napa Valley counterparts.

The Sonoma County red wines that follow are rated on a scale of one to four corks, with one cork being equivalent to first base on the “make-out” scale; two corks equaling second base; three corks equaling third base; and four corks equaling a home run. Batter up! …

Field Stone 1994 Alexander Valley Cabernet Sauvignon
($13-$15)
This is a wine that has been on the market for several months, yet for some inexplicable reason can still be found on many wine shop shelves. The nose conjures up images of caramel, cream, and chocolate-covered cherries, while the flavors lean toward black cherry, cocoa, and cassis. As flavorful and satisfying as many cabs costing twice as much. Rating: 3 corks.

Cardinale 1993 Meritage ($60)
The Wine Spectator (referred to simply as “God” by wine geeks) recently panned this bottling from Kendall-Jackson and, frankly, I don’t get it. While it’s not as fruit-forward as the 1992 version and will benefit from a few years in the bottle, this still is great juice. The grapes used in the blend come from both Sonoma and Napa counties, and the resulting wine is a smorgasbord of flavors, ranging from raspberries to plums and from chocolate to vanillin oak. Rating: 3.5 corks.

Stonestreet 1995 Alexander Valley Merlot ($21-$24)
If it didn’t say merlot on the label, one could confuse this wine for a cabernet. It’s big and bold, and the fact that it’s unfiltered allows all the aromas and flavors of the fruit to shine. It smells like a combination of coffee roastery at daybreak and mom’s kitchen when she’s baking a chocolate cake, and it’s loaded with jammy fruit and smoky oak flavors. Certainly a candidate for aging, but why wait? Rating: 3.5 corks.

J. Fritz 1995 Dry Creek Estate Merlot ($15-$18)
If you like the taste of fresh berries, you’ll love this wine. And if you enjoy the floral aroma of cabernet franc, this also is the wine for you; cab franc comprises 20 percent of the blend. Balance is provided by just a hint of vanillin oak. Like the Field Stone cabernet, a true bargain. Rating: 3 corks.

Supplies of these wines vary; the J. Fritz merlot, in particular, could sell out quickly. That’s the bad news. The good news is that wines like these tend to be gobbled up by restaurateurs, who include them on their wine lists. Furthermore, all are wonderful food wines, making them ideal companions to a romantic dinner … no matter how you define “romantic.”