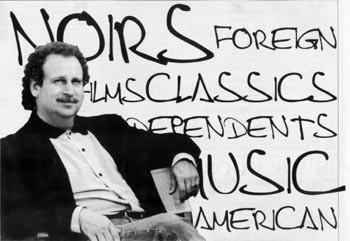 F ROM ACROSS the street, obscured by a gray torrent of rain, the time-worn art-deco marquee of San Rafael’s historic Rafael Theater rises up conspicuously above an unsightly barricade of wet wooden beams and weather-soaked boards, behind which hides the remainder of the building that was once among the most beautiful and popular movie palaces in the Bay Area.

Shut up tight since 1989–when the Loma Prieta earthquake caused the theater to be deemed seismically unsafe–the Rafael’s future seemed as dim as the now-ruined light bulbs still outlining the fading marquee. Thanks to the Film Institute of Northern California–which two years ago renovated the classic Lark Theatre in Larkspur–working with a fierce cadre of North Bay film buffs and some expert fundraisers, the Rafael Theater is just beginning an astonishing transformation: not only is it scheduled to open again by the end of this year, but it intends to do so as one of the Bay Area’s hottest new filmgoing destinations, a living museum of cinematic history that will trace the art of the movies from the silent-film era straight into a high-tech, interactive future.

“It will be a museum of the moving image,” says Petaluma resident Mark Fishkin, executive director of the Film Institute, which also produces the Mill Valley Film Festival. “We’ll be able to greet people in the lobby, saying, ‘Come on in. This is what movies used to be like.’ And they can have that experience, and then we’ll say, ‘Now, let’s show you what movies are becoming.'”

Fishkin is standing in the theater’s lightless lobby–a work crew accidentally disabled the electrical power box–inches away from a curtain of rain leaking onto the broken-tile entryway in an atmospheric chorus of drips and splashes that echo all through the cavernous expanse of the room.

Ann Brebner, project chairperson for the Rafael Film Center, as the new three-screen complex will be called, shines a flashlight around the lobby, illuminating various architectural features of the nearly 100-year-old building, now fully retrofitted to appropriate seismic standards. Brebner points out the sweeping balcony, ornate wooden moldings, and a marvelous faded mural of an unclad female figure rising up out of a swirling mist.

“Silent movies began playing here in 1918,” Brebner relates. “It was the Orpheus Theater then, until it burned down in 1937 and was reopened in ’38 as the Rafael.” She shines the light on the mural again. “She was covered up by mirrors when we found her,” she says, feigning a gasp. “Apparently they hid her in 1961, when the Rafael began showing a lot of Disney movies. It was evidently deemed inappropriate for children to walk in and see a naked lady up on the wall.”

T HE PROJECT IS A long-awaited dream for Fishkin and Brebner. The finished Rafael Film Center will feature a 350-seat theater in the original auditorium–restoring the existing art-deco features–minus the original balcony, which will be converted into a 125-seat theater in the style of the Orpheus’ silent-movie house. A third theater, with 90 seats–reflecting a high-technology film theater of the future–will be established in the adjacent building, directly over the planned cafe that will lead into the main lobby of the complex.

All this was supposed to have opened last fall, but production was halted when fundraising efforts ran out of steam. An expanded board of directors has created a special committee of experienced fundraisers to find the necessary cash to complete the $6.8 million job. At first hoping to avoid taking on debt, the Film Institute has now given in, accepting a $3 million construction loan and taking on an additional $3 million bank loan.

“We hope to raise the remaining monies to pay off the loans sometime during the construction period,” Fishkin says. “But at least we now have the flexibility to continue with the project.”

Donations are actively being sought, and a number of innovative enticements are being offered. For instance, the first donor to contribute at least $1 million will receive the honor of lending the name of their choice, perhaps in memory of a loved one, to the theater complex as a whole. That name will be the official corporate name of the facility, used in all literature and on the letterhead. For smaller donations, naming rights will be given on everything from the individual theaters to the upstairs lobby and the grand staircase.

In addition to the Film Center’s museum status, the complex is expected to serve as a major educational asset–with classes invited in to view films that correspond to the students’ curriculum–as well as to be a desirable environment in which to view small independent movies, and even rare specialty films that will be available nowhere else.