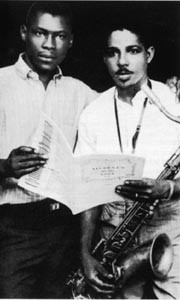 IT AIN’T SUMMER without ska. And this soulful 20-track collection goes down real smooth, showcasing one of the most influential–and underrated–musicians ever to swing and sway on the island of Jamaica. Saxophonist Roland Alphonso was a founding member of the Skatalites, the legendary Studio One band that helped define the upbeat dance music that served as a precursor to rock steady and reggae. Alphonso, who died two years ago after suffering a stroke onstage in Los Angeles, was a trained musician who earned the nickname The Chief Musician and tutored the then up-and-coming Bob Marley and the Wailers (Alphonso taught them how to structure songs and count beats), among other reggae greats. Born in Havana of a Cuban father and a Jamaican father, Alphonso landed on the mean streets of Kingston at age 5. Five years later, he started playing drums and eventually switched to saxophone. In the ’50s, he joined the Blu-Flame Orchestra, which also featured future Skatalites Tommy McCook and Don Drummond. By 1960, Alphonso and his bandmates were well-versed in big-band jazz and American R&B and well on their way to exporting the distinctive brand of contagious Jamaican R&B known as ska. This CD spans eight formative years, from the 1960 single “Four Corners,” originally credited to Roland Alphonso & the Alley Cats, to the 1968 rock steady hit “Jah Shakey.” The session list reads like a veritable Who’s Who of Ska and Reggae: vocalist Rita Marley (wife of Bob Marley), producer Clement Dodd, vocalist Lee Perry (who went on to become one of the island’s most important dub producers), pioneering ska guitarist Ernest Ranglin, and many more. A soulful groove.

Christy McWilson The Lucky One Hightone

“SECURE IN MY ROLE of ‘band member,’ one-fifth of the roots-rock band the Picketts for the past 10 years, I always thought I’d step out in front of a firing squad before I’d step out on my own as a solo artist,” singer/songwriter Christy McWilson writes in her press bio. Luckily, producer Dave Alvin saw it differently. The Picketts were a cult fave among early Americana fans–steeped in Stone-influenced honky-tonk and a dusty Bakersfield-style country. The band wowed fans with incendiary covers of the Clash and Yoko Ono. On this stunning release McWilson delivers plenty of bad-girl growl on a handful of well-crafted originals and a hauntingly beautiful cover of Brian Wilson’s beautiful “‘Til I Die.” And she gets help from an impressive pack of friends, including Alvin, Peter Buck and Mike Mills of R.E.M., Rhett Miller of the Old 97’s, Greg Leisz of Grant Lee Buffalo, and singer Syd Straw. One of the most impressive debuts this year–promise aplenty.

HAVING SCREWED UP the first digital remastering of this classic, the folks at Legacy got it right on this low-priced 24-bit Centennial Edition (actually Armstrong’s 100th birthday anniversary is next year), even tossing in 11 bonus tracks. Trumpet master and scat-singing innovator Armstrong was already an established star when he cut this 1955 gem, hot on the heels of his acclaimed Louis Armstrong Plays W. C. Handy. Velma Middleton provides vocals on three tracks–not distinctive, but the perfect foil for the gregarious Armstrong. Billy Kyle delivers the goods on Waller’s stride-style piano parts. Trombonist Trummy Young (what a knock-out!), clarinetist Barney Bigard, bassist Arvell Shaw, and drum-mer Barrett Deems round out this super lineup. Their swinging New Orleans stomp on the lead track, “Honeysuckle Rose,” is worth the price of admission alone. A must-have recording for any serious jazz lover.