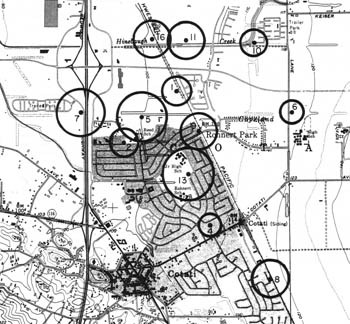 Trying to slow down progress is a lot like learning how to catch a salmon with your bare hands. No matter how hard you try, the slippery fish squirts right out of your clutches every time.

Much like the increasing numbers of fall-run salmon recently spotted in various North Bay tributaries, the Rohnert Park city council was swimming upstream at a recent Nov. 23 meeting. At issue was the city’s recently completed draft water supply assessment (WSA), a developer-funded report that claims current and projected water supplies will easily support Rohnert Park’s ambitious plans for annexation and development through 2025.

However, the draft WSA’s findings run against a torrent of existing scientific data that indicate that there is not enough water to supply the city’s planned development. Furthermore, the city council is well aware of this data. Prior to the Nov. 23 meeting, members of the OWL Foundation, a local environmental group concerned with land and water use issues, delivered a 5-foot-tall stack of documents to the council that described the crisis.

The OWL documents, which include the city’s own 2000 environmental impact report (EIR) prepared for its 20-year general plan, indicate that groundwater is being pumped from the aquifer underlying the city faster than it is being replenished by rainfall, a condition known as “overdraft.” Moreover, as reported before in these pages, the city’s insatiable thirst for groundwater has already created a vast “cone of depression”—think of the funnel-shaped whirlpool that forms when you drink a milkshake through a straw, but on a much larger scale—that may be negatively affecting well levels in the unincorporated areas surrounding Rohnert Park.

The foundation brought its attorney Ed Casey, a veteran of Southern California’s water wars, to the city council meeting. In no uncertain terms, Casey explained that should the council choose to implement the draft WSA without further study, it could be subject to a lengthy legal process known as “adjudication” which turns control of local water supplies over to the courts until a suitable management plan is implemented.

Momentarily chastened, the Rohnert Park City Council postponed a decision on the draft WSA until Jan. 25. In the coming months, its decision, combined with the outcome of litigation concerning the Eel River diversion, may help determine whether the region chooses the path to water sustainability or the path to a full-fledged water war.

For anyone in Sonoma County who depends on the reliable delivery of water—which is to say everyone—the latter path will have profound consequences.

Unfortunately, that’s the path opponents say Rohnert Park is on.

To paraphrase the old 12-step joke, the projections for future water supply and demand in Rohnert Park’s draft WSA are based on a river called denial, at least in the eyes of the water assessment’s opponents. At the Nov. 23 city council meeting, perhaps John King, the Penngrove rancher who first raised the ruckus about declining well levels in the unincorporated areas surrounding Rohnert Park back in the late 1990s, said it best: “The 2000 EIR clearly paints a picture of serious gloom and doom for this part of the county. It shows how badly overdrafted the basin is. This document that warns how bad the picture is still stands. It’s still certified.”

As detailed here previously (“Watered Down,” Sept. 8, 2004), when the wells on King’s ranch and those of nearby neighbors began running dry in the late 1990s, they organized the South County Resource Preservation Committee and successfully sued Rohnert Park. The Sonoma County Superior Court subsequently ordered Rohnert Park to cut its groundwater pumping nearly in half in a 2000 settlement known as the Water Policy Resolution. To make up the difference, the city entered an agreement with the Sonoma County Water Agency (SCWA) designed to eventually wean Rohnert Park off of groundwater entirely using the agency’s surface water. However, since then, litigation involving the Eel River diversion has called into question the SCWA’s ability to deliver enough water to supply Rohnert Park’s future needs.

The Water Policy Resolution, combined with a 2002 state senate bill (S 610) that directs local water districts to determine the future supply and demand of water before approving new development, compelled the city to seek a second opinion. The resulting draft WSA was completed by the Woodland-based engineering consulting firm Luhdorff & Scalmanini at the cost of $150,000, a price borne entirely by the local developers—Redwood Equities, Van Logan, Quaker Hill and Brookfield Homes—that have a direct stake in Rohnert Park’s plans to add 4,500 houses and 5 million square feet of commercial development by the year 2025.

“We’ve asked developers to pay their own way,” says Rohnert Park city council member Vicki Vidak-Martinez. “We don’t think existing residents should have to pay for the new development that’s coming in.” Asked if the report’s findings, which are tremendously favorable to developers, were affected by the fact that developers had paid for the WSA, she said, “I can’t imagine that they went with a firm that our staff didn’t sign off on.”

The WSA’s critics beg to differ. As pointed out at the city council meeting by OWL chief scientist Steve Carle—a hydrologist for Lawrence Livermore Laboratories and a sixth-generation Penngrove landowner—the object of the draft WSA is to “reinvent local groundwater history” in order to support new development. Suspiciously, a region long thought to be in overdraft was transformed by the draft WSA into an area where, as Carle put it, “water is gushing out of the aquifer.”

Will Rohnert Park once again elude the grasp of environmental activists and other concerned citizens? At the city council meeting, representatives of Luhdorff & Scalmanini defended the firm’s findings in a technical memorandum. Responding to a question about the differences between the WSA and the city’s 2000 EIR, the memorandum states, “The apparent discrepancies between the EIR comments on ground level elevations and average annual recharge do not affect the findings contained in the draft WSA.”

The memorandum notes that its methodology—comparing pumping rates to well-water levels—is completely different than the complex computer model developed by the United States Geological Survey used in Rohnert Park’s 2000 EIR. Yet amazingly, while highly critical of the annual recharge determined by the city’s own EIR, the memorandum fails to present its own recharge rate. Without that, whether or not the basin is in overdraft is virtually impossible to determine.

“What they tried to do was keep any discussion of overdraft at arm’s length,” says OWL president H. R. Downs.

Further straining the report’s credulity is that for six months during the survey period—from November 2003 to May of this year—Rohnert Park shut down its 31 active groundwater wells, relying on SCWA surface water. As expected, the well levels came up, but such a feat is only possible during the rainy season and totally infeasible during peak summer demand periods or in the long-term range of the city’s general plan.

“To say that a water basin is not in overdraft based on a new and dramatic way of operating your wells is not a way to do a study,” chides attorney Casey.The draft WSA also completely ignores ongoing litigation concerning the Eel River diversion and the SCWA’s planned expansion of the water supply transmission system project. Because of the litigation, the SCWA has warned its contractors, including Rohnert Park, that the agency may not be able to provide the amount of water requested in the future, and that contractors should look to other sources, groundwater, to fill in the gap.

“You have to look at things over time and project the future based on realistic scenarios,” says Casey. Presently, he says the OWL Foundation does not want to force the issue with litigation. “The basic object of my client is that we should be working on a plan that manages water resources for the long term.”Downs concurs. “Why not put in a water budget?” he says. “Why not manage your groundwater responsibly? You don’t get more eggs out of the golden goose by gutting it.” However, if the decision goes against OWL on Jan. 25, the water war may be on.

“If they insist on a battle, it’s going to be gruesome for them,” Downs promises.