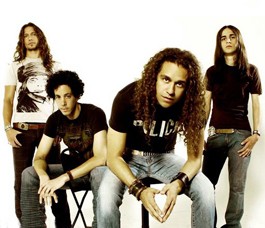 “Getting great bands to Santa Rosa would not be possible without the listeners,” says Scott Less, program director for 101.7-FM the Fox, who hosts the station’s second-annual Jingle Bell Ball Dec. 18 at the Last Day Saloon. “This really has been a great year for live music in Sonoma County. Why drive to the city, pay the bridge toll and pay to park, when you can see great bands for a real inexpensive ticket here in your own community?”

Consistent with the station’s $10 concert series, the Jingle Bell Ball features up-and-coming touring metal acts. The three bands on the bill make up a snapshot of heavy rock’s current identity—a huge post-grunge, post&–Linkin Park, post-Nickelback tidal wave that churns growling thrash and emo melodicism with chunks of dance, pop-punk, and classic rock. Indie only by merit of their record labels, these rising stars shoot for a booming, radio-friendly, arena-rock mainstream.

Austin-based headliners Anew Revolution, with their debut album Rise, are the doomiest and most razor-guitar sharp of the lineup; their cover of New Order’s “True Faith” pumps goth groove, while “Generation” carries the thumping shimmer of U2. Vayden (pictured above) offers the thinking man’s set; the Phoenix, Ariz., band’s debut Children of Our Mistakes uses jarring rhythms and shifting dynamics across a range of catchy, unusual screamo-prog and uplifting chamber ballads. Opening act Lynam have already released their fifth album, Tragic City Symphony, and the Birmingham, Ala., rockers bring a dose of hair metal to the show—with a touch of bluegrass banjo to boot.

Less says the Fox has “worked hard over the last couple of years to create a concert stop in between Portland and San Francisco, where bands can get support from radio and the community.” When the station sponsored future stars like Drowning Pool and Black Tide, they were “either on major tours or were added soon after they played live in Santa Rosa. That says a lot about the fans in Sonoma County,” he says proudly. “They’re willing to embrace what is new and cutting-edge, often well before these bands have broken through.”

The Jingle Bell Ball gets fired up on Thursday, Dec. 18, at the Last Day Saloon. As a unique gift to locals, all 13 of the Fox Calendar Girls will be autographing the station’s 2009 calendar as a fundraiser to support breast cancer research at Sutter Medical Center. 120 Fifth St., Santa Rosa. 9pm. $10. 707.545.2343.