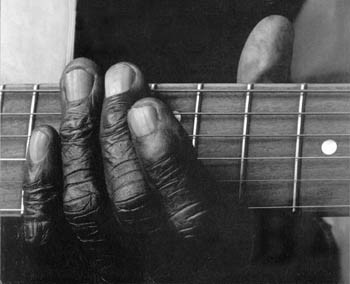 Robert Johnson tribute is a keeper

ROBERT JOHNSON casts a long shadow, even 63 years after his untimely death. The enigmatic Mississippi delta bluesman wrote and recorded just 28 songs during his brief career, and only a handful of people alive today actually knew him or heard him perform, yet Johnson remains a wildly intriguing figure on the American music landscape.

Over the years, Johnson’s songs have been recorded by Eric Clapton, the Rolling Stones, Fleetwood Mac, Peter Green, and hundreds of others. The 1986 film Crossroads riffed off of Johnson’s elusive personal history and the myth that the bluesman once cut a deal with the devil. And a handful of documentaries, including one starring bluesman Keb ‘Mo in dramatized sequences, have sought to unveil the man behind the legend.

Easier said than done. Johnson, who died in 1938 at age 27, reportedly after being poisoned by a jealous husband, was virtually unknown in his day, but left an impressive–if diminutive–body of work. A new all-star tribute CD, Hellhounds on My Trail: Songs of Robert Johnson (Telarc), adds to that legacy 16 tracks about cheating women, cheating men, cheap booze, and hard luck. Together these songs, lovingly rendered and infused with passion, still touch the soul (just check out the chilling version of “Hellhound on My Trail” from Alvin “Youngblood” Hart and James Cotton) and retain much of the heat of the originals.

And that’s most refreshing in its own way.

There are plenty of recognizable names here: The ubiquitous Taj Mahal–a living repository of American blues–leads off with a stripped-down version of “Crossroads,” delivering a propulsive solo on his National steel guitar; North Bay bluesman Joe Louis Walker dishes up a rare solo acoustic track on “Dust My Broom”; and Grammy-nominated guitarist Susan Tedeschi teams up with guitarist Derek Trucks (nephew of longtime Allman Brothers drummer Butch Trucks) for a sassy take on “Walking Blues.”

There also are lesser-known players as well. For instance, Memphis blues guitar phenom Eric Gales deconstructs “Me and the Devil Blues,” featuring a marvelously understated Hammond B-3 organ backing from Norris Johnson.

But it is the seasoned touch that gives this compilation its special flair–it just doesn’t get any better than 85-year-old guitarist and singer David “Honeyboy” Edwards, who apprenticed under Johnson and blues legend Charley Patton, strolling through “Traveling Riverside Blues.” Authentic? Believe it.

Indeed, Telarc–which in the past year has emerged as the nation’s premier blues label–draws here on a super-roster of veteran players that includes Robert Lockwood Jr., who learned his blues firsthand from Johnson and was so close to the itinerant bluesman that he considered himself Johnson’s stepson. Among others are Chicago blues harmonica giant Carey Bell, former Muddy Waters sideman Bob Margolin, Texas blues legend Clarence “Gatemouth” Brown, and Chicago blues pianist Pinetop Perkins, as well as relative newcomers Lucky Peterson and Chris Thomas King.

An strong lineup, to be sure, collaborating on a humble tribute to an unlikely musical giant. As blues writer Lawrence Cohn points out in his liner notes, “[P]erhaps no single individual has had more of an impact on blues in general and the artists of the past three and half decades in particular.”

Johnson couldn’t possibly have imagined that he would be such a larger-than-life figure after all these years–deal with the devil or not.

Probably best known for his oft-covered composition “Feel So Good Today,” David “Honeyboy” Edwards is one of the last living links to the great country blues players of the 1920s. This newly reissued 13-track CD (originally issued in 1979 on the Folkways label) is just Edwards, his slide-guitar playing, warm vocals, and heart of soul. From the opening track, “Big Fat Mama,” which served as a model of vocal phrasing for Taj Mahal, it becomes apparent that Edwards–who worked with all the founding fathers of the Delta blues–was a major influence on a whole generation of contemporary bluesmen, from Taj Mahal to Keb Mo and beyond. An essential recording for any serious blues hound.

From the March 1-8, 2001 issue of Metro, Silicon Valley’s Weekly Newspaper.

© 2000 Metro Publishing Inc. MetroActive is affiliated with the Boulevards Network.