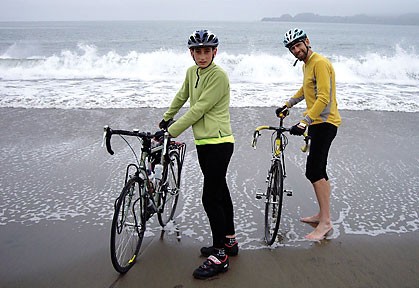 For many Americans, a trip to the local Chuck E. Cheese counts as high adventure. But for the Biers-Ariel family, an outing looks more like a 3,804 bicycle trip from San Francisco to Washington, D.C.

In his new book, The Bar Mitzvah and the Beast: One Family’s Cross-Country Ride of Passage by Bike, Matt Biers-Ariel tells the story of traveling cross-country with his wife, 12-year-old son Yonah and younger son Solomon. As the family bikes across the United States, encountering desert heat, erratic drivers, numerous flats, bad weather and motel meals, Yonah is provided a unique rite of passage, of transitioning into young adulthood via the road instead of bar mitzvah; along the way, the family gathers signatures for a global warming awareness petition to be presented to Congress.

Based in Davis, Biers-Ariel commutes by bike to his teaching job in Winters for most of the year and edits the “Davis Bicycles” column for the Davis Enterprise. He delivers an interactive presentation on how to prepare for and undertake a serious family adventure, mixed with readings from his new book (expect plenty of humor and beer references) on Tuesday, Aug. 7, at REI. 2715 Santa Rosa Ave., Santa Rosa. 7pm. Free. Registration required at 707.540.9025.—Leilani Clark