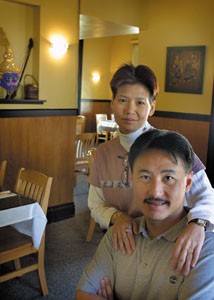 You Can Rin My Bell: Anthony Komindr and Arisa Simakulthorn, two of the owners of Rin’s Thai (along with Yupa Garrett and Bob Garrett), keep the embellishments to a minimum and serve good food.

Exotic and gold-encrusted, the decor of the typical Thai restaurant has an alluring sense of foreignness and mystique. Sadly, the food therein doesn’t always attain the sensory levels of the setting.

To wit: I eat out often in the East Bay (the permanent Mr. Bir du Jour lives there), a hotbed of ethnic restaurants. The north Berkeley/Albany neighborhood around Solano Avenue alone has at least five Thai restaurants–all in an area of less than one square mile. That’s a lot of Thai. The tough competition makes for good eats; with five Thai restaurants in one neighborhood, you have to strive to draw customers.

At one of the Thai places in Santa Rosa (I’m not naming names), I get the feeling that they are only half trying, if that. Everything comes to the table gummy or watery or pasty, and the vegetables populating the curry are in haphazard hunks.

Of course, sometimes it’s the trappings of a place that push it above the rest. Our favorite Thai place, Boran, is cheap but not wonderful. The food is not great, and the service is even less great. Why do we go there? It’s partly for the whole “Thai restaurant” package. They have those styrofoamy, pastel shrimp chips on the table, along with a gloppy-sweet dipping sauce–like Thai chips and salsa! Before the entrée, they bring out little bowls of cabbage-carrot soup in a thin, clear broth. This soup is the best thing ever.

It’s those freebies–the shrimp chips and cabbage soup–that are consistently the best part about dining at Boran. They keep us coming back every few weeks–only to be confronted with overcooked seafood languishing in lackluster curries and basil mushrooms which, though tasty, are nothing more than that: basil and mushrooms.

Sometimes I crave the shrimp chips. More often I dream of Thai food the way it’s supposed to be: bright-tasting, full of surprising textures and flavors, spicy but not heavy-handedly so, and fragrant in a way that a dinner cooked at home can never be. I want a dining experience that’s as close to a Lonely Planet travel guide coming to life in a one-hour span as possible.

Rin’s Thai of Sonoma is not quite the dream restaurant come true, but it comes close. Notably, they do not fall into the trap of sameness with so-so food and too many dusty relics crowding up the dining area. The latter is apparent before even setting foot in the door. The restaurant, just a stone’s throw from Sonoma’s tourist-infested Plaza, looks more like a wine country B&B than an ethnic restaurant. It’s in a grand old house with a stately front porch. (Rin’s used to make its home on Broadway, where Bistrot La Poste now resides. It moved to the fancy house on Napa Street in 2000.)

Inside, the lack of knickknack clutter is a revelation. The walls are white, with minimal art. There is still a handful of carefully placed, elaborate and colorful Thai masks and such for decoration. On the wall above the bar, four clocks give the time for Bangkok, San Francisco, New York, and London. On a Sunday night, the dining room was on the full side, and no one seemed too rushed.

We started off with fresh vegetarian salad rolls ($5.95), which were pleasant: shredded lettuce, rice vermicelli, and tofu in rice paper, with a delightfully nongoopy sweet and sour sauce for dipping, though the lack of fresh herbs (i.e., mint or basil) inside was palpable, and the finely shredded lettuce filling the rolls made for a sameness of texture.

Puffys ($6.75, and, yes, we did order them because they have a cool name) were fried dumplings in a crispy wontonlike wrapper with a filling of ground beef, potatoes, and curry. The four puffys were generously sized and not at all greasy. The accompanying cucumber salad was doused in a sugary dressing and dusted with ground peanuts. Simple, though I could have eaten a ton of it alone and been pretty content.

I tried the prawn pad Thai ($8.25), because someone had to. If a party of four eats at a Thai place, you can bet at least one person will get the pad Thai, which varies from place to place in relative density of add-ins like tofu, eggs, and shrimp. At some places, the noodles are off-puttingly rubbery. This pad Thai was exactly what it should have been–noodles neither stretchy nor pasty–though the prawns (four of them) were too overcooked to bother with.

The entrées at Rin’s are plated with great care. The grilled salmon special ($11.95) arrived at the table atop charbroiled carrots, zucchini, asparagus, and potato slices arranged in a starburst pattern. A thin lemon-garlic sauce, pungent with fish sauce, came on the side. The vegetables, which had been marinated, were flavorful on their own without the sauce, and were deeply charred but retained a crisp texture. The generous fillet of salmon was moist, though slightly overcooked.

I had expected the charbroiled vegetables ($8) to be lackluster, but they were virtually identical to the delightful vegetables accompanying the grilled salmon (minus the salmon and plus a few mushrooms). Even the sauce was the same, but it did make a truly vegetable-heavy vegetarian entrée, and the grilled vegetables were good enough to merit an encore. Chicken gang dang ($8.50), a red curry in coconut milk, was fairly mild. These curries always seem the same to me– satisfying but not terribly distinctive.

Our service was amazingly cordial while not consistently attentive, and our waiter didn’t even inquire if we wanted dessert. We asked for it anyway: fried banana with coconut ice cream. I’d have preferred the bananas riper, but they were light in their puffy, golden-brown cloak of batter, and the coconut ice cream was rich and vibrant with true coconut flavor.

Rin’s wine list is amazing. Usually a Thai restaurant will have a few reds and whites–a Woodbridge Chardonnay or the like. Rin’s list comprises 35 wines, with nearly every bottle offered by the glass. There are plenty of crisp and acidic whites that pair well with spicy and flavor-intensive Thai cuisine, but all of the suggested pairings on the wine list were with the reds, which I thought was kind of weird. But as their entrées are not so exaggeratedly spicy-hot, maybe Rin’s can handle that kind of thing. Remember: Red wines make spicy food spicier.

The Iron Horse Cuvée R ($7 glass), a blend of Viognier and Sauvignon Blanc, had a wonderfully deceptive finish, starting out light in the mouth and then playing out with a lingering sensation of green apple. Everyone else ordered Thai iced teas ($2), which they informed me were fine but not as good as others they’d had elsewhere.

The best aspect of Rin’s Thai is that, despite the connotations of a more swanky setting, their prices are amazingly reasonable. Sure, there are cheaper Thai restaurants, but those are probably the places where, when passing the kitchen on the way to the bathroom, it’s best to turn your eyes away from the food-prep area. Why settle for poor sanitation and weird little shrimp chips when you can have comfort, style, and value?