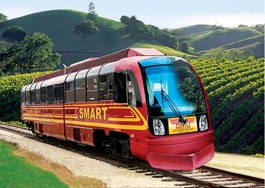 Is SMART a good investment in the future or are commuters being duped into a bureaucratic money pit?

LUXURY TRAVEL: Opponents of Measure Q argue that the SMART train costs too much and serves too few. Proponents counter our need to revamp suburban transit.

On weekdays, the morning commute along Highway 101—the main transportation corridor in the North Bay and ranked by Caltrans as one of the most congested freeways in the Bay Area—is akin to hanging out in a crowded parking lot. Cars slow and then stop at a snail’s pace as frustrated drivers hope for relief from rampant brake lights.

Sonoma-Marin Area Rail Transit (SMART) advocates want voters to think about this congestion when they hit the voting booths Nov. 4. If Measure Q passes, Sonoma and Marin Counties will see the implementation of a 70-mile passenger train service on the existing publicly owned right of way between Cloverdale and Larkspur. The proposal also includes a parallel bicycle-pedestrian pathway connecting all 14-train stations between the two counties.

“We need to do something about global warming. Alternatives to the freeway will help prevent global warming and relieve traffic congestion. The train will remove 1.4 million car trips per year,” says Cynthia Murray, president and CEO of the North Bay Leadership Council. “This is an investment in our future,” Murray says, adding, “We need alternatives.” SMART’s environmental impact report states that the projected number of daily passenger trips on the train would be 5,300, while approximately 7,000 to 10,000 people daily would use the bike-pedestrian pathway during the work week.

According to SMART’s white papers, the train and pathway project will cost an estimated $541 million to build. Annual operating costs, including maintenance, labor and the operation of SMART shuttle vehicles, will total a little more than $19 million. Most of the construction and maintenance costs will be covered by a quarter-cent sales tax dedicated to SMART, adding 25 cents to every $100 in retail services. Other revenues will come from passenger fares, leasing property along the rail line and bonds. Service is estimated to start up in 2014.

Dr. Robert Eyler, director of the Center for Regional Economic Analysis at Sonoma State University, declares the 20-year funding plan to be “reasonable and conservative,” but opponents of Measure Q insist that the public is not being told the full story. The Sonoma County Taxpayers’ Association (SCTA) believes that the SMART train initiative is a costly mistake.

“There has never been a public works project in the Bay Area that has ever come in on schedule and on budget,” says SCTA executive director Fred Levin. “What they don’t take into consideration is the cost of their bonds. They need to sell $350 million worth of bonds. They are not taking into account the interest that is placed on the bonds. When you see that, it is a very expensive system.”

According to an informal study by SCTA, dividing the number of one-way rides projected by SMART—approximately 5,050 on the weekday—by the projected population in the year 2025, a negligible amount of people will use commuter rail. “A train is not a silver bullet. Congestion is here to stay. It is not going to be eliminated or reduced substantially,” Levin says. “Even if you compare 2008 ridership estimates for just weekday commuter service to the current population of both counties, less than 1 percent of the 750,000 population would be using the train.” Citing the large budget for the project, SCTA wants voters to think about whether their tax money is being spent with appropriate caution.

“It is a lot of money for a very small amount of people,” Levin says. Other SMART opponents believe that investing capital into already existing modes of commuter transportation is a more viable and economically feasible solution.

“We don’t think that quarter-cent sales tax is enough to fund the service. The danger is that if it won’t, they’ll have to come back to the voters for more money. Or they could raid the monies that support Golden Gate, Marin County and Sonoma County Transit,” says Joy Dahlgren, co-chair of the North Bay Citizens for Effective Transportation. Dahlgren’s advocacy group has been fighting the SMART proposal since 2006, when the former Measure R was approved by 65.3 percent of voters—1.4 percent short of the super-majority needed to get the proposal passed.

Opponents see increased bus service and high occupancy vehicle lanes as “smarter” alternatives to the train. “The train is a luxury, not a necessity. We have buses going around that are virtually empty. By definition, trains are inflexible. Buses can drop people off in their own neighborhood,” Levin says. He points out that SMART has spent $1.2 million in community outreach, money that could have been spent on promoting bus use.

Murray disagrees. “With buses you will always be caught up in freeway congestion. You’ll be caught in traffic. On the train, you can use your wireless; you can get up and walk around. You can get up and go to the bathroom. It’s less stressful and you’ll get to your destination quicker.”

In addition, Murray believes that having alternative modes of transit between job centers in the North Bay will be important as businesses work to come into compliance with the California Global Warming Solutions Act of 2006. The act requires California businesses to reduce greenhouse gas emissions back to 1990 levels by 2020. Employers will need to reduce vehicle miles traveled by their employees to be in compliance. Since the Association of Bay Area Governments has projected that Sonoma County will add 98,480 jobs between 2000 and 2025, and Marin County will add 35,280 jobs over the same period, transit options might help employers comply.

As gas prices surge, SMART supporters point to the success of other suburban commuter rail models such as Caltrain and the Sprinter. Running between San Francisco and San Jose, the Caltrain system saw record revenues and ridership in 2008. Ridership on the Sprinter—a new east-west mobility link between congested corridors in San Diego County—reaches up to 8,000 people a day along a pre-existing 22-mile stretch of railway.

Controversy surrounding Measure Q continues to build during the lead-up to the election. In September, county judges recently threw out sections of the ballot arguments against Measure Q, ruling that opposition statements contained false or misleading information. In Marin, the Superior Court Judge Terrence R. Boren deleted five passages from the ballot argument.

While SMART looks to be environmentally friendly in that it will reduce greenhouse gases by at least 124,000 pounds per day, Dahlgren cites concerns that the cleanup of the railway between Novato and Healdsburg might bring other dangers.

“The main business opportunity identified by the North Western Pacific Railroad is gravel mining up near the Eel River,” Dahlgren says. “The only way they can do it would be to ship it out by train. SMART would facilitate the success of this rail venture by repairing the track all the way from Novato to Healdsburg.”

According to Murray, this argument does not have basis in current reality. “Freight trains can run without any vote from the people. They don’t need SMART to run. They’re making these claims without studies. It’s all very speculative.”

As supporters and opponents of Measure Q try to get the public to listen to their side of the story, Christine Culver, executive director of the Sonoma County Bicycle Coalition, hopes that voters will see past the politics of it and toward the SMART ballot measure as being a sheer social necessity. “We need this alternative,” Culver stresses. “Gas prices are rising, and already so many more people are getting on their bicycles and leaving their cars at home.” She adds, “We are at a critical turning point in history where people want to make change, they want to get out of their cars and many of them have no choice with the costs of gasoline continuing to climb. This will be a fantastic separate access from Highway 101, giving us much needed alternatives.”