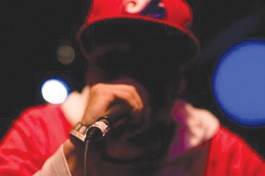 How did Sebastopol become hip-hop central?

If you could go back in time 25 years and walk around declaring that one day Sebastopol would be hip-hop headquarters in Sonoma County, most people would call you crazy. Bryce Williams, on the other hand, might think you were on point. After all, in 1985, the DJ who now goes by Chango B entered and won a breakdance contest at the Sebastopol Community Center. The prize? A Paul Hardcastle 12-inch. It was, as they say, love at first backspin.

This weekend, Williams hosts the Platform, a multimedia hip-hop showcase covering MC-ing, breakdancing, DJ-ing and in the art on display by local street artist Jimmy Hits, graffiti writing. Pulling from the cream of local rhyme talent, the show includes 2010 NorBay winner Truthlive (above), freestyle whiz and Jazz Mafia sensation Dublin and Interdependent Media’s unstoppable Moe Green on the mic. Breakers from the Zulu Nation troupe get down to DJs Lazyboy, Primo and Beset, and Williams himself goes up on the 1200s against Big G from the 808 Band in a DJ vs. live drummer extravaganza.

“Hip-hop to me is a really important piece to the Sonoma County Music scene,” says Williams, adding that he tries to bring breakdancing and writing to any event he puts on. “I saw the Black Eyed Peas at the Phoenix like 10 years ago,” he notes, “and there were breakers there.” And though Sebastopol may seem like an unlikely spot for beats, rhymes and life, the vibe makes for fertile ground to champion the underground. “There are a lot of MCs in Sonoma County that are grinding,” he says, “and then there’s a lot of club hip-hop out there with Hollywood rappers that look really pretty. I’m trying to put focus on supporting my friends who are working really hard in the underground hip-hop community.”

For an Analy grad who grew up in rural Bloomfield, Sebastopol still sometimes seems like the big city when Williams recalls watching Beat Street as a kid. “I was like, ‘What is this culture? It’s not cows.’ The people were dressing really cool, dancing all crazy, they had these boomboxes. I was like, ‘What is this about?'” Find out when the Platform sets it off on Saturday, Nov. 13, at Aubergine. 755 Petaluma Ave., Sebastopol. 8pm. $10. All ages. 707.827.3460.