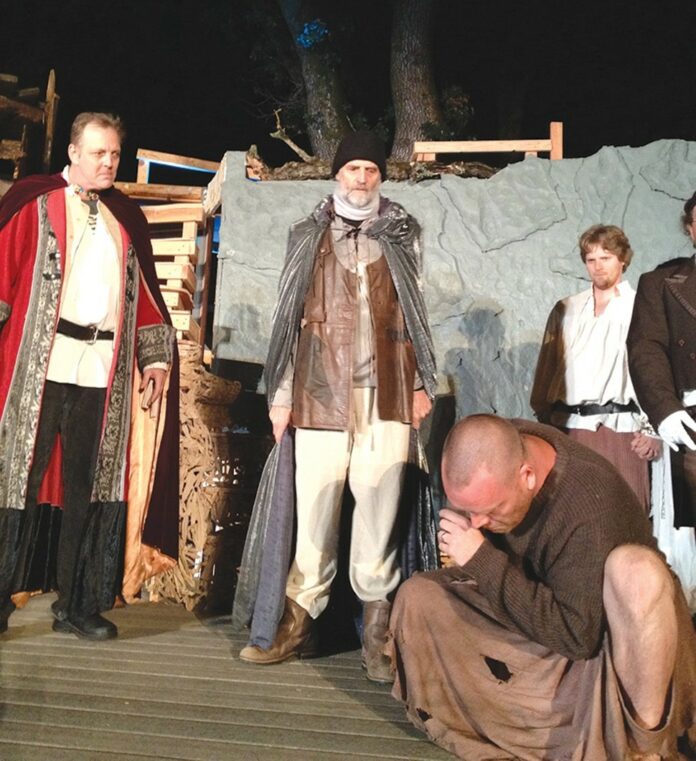 Review: ‘The Tempest’ at Ives Park

Before the show even begins, audience members know something big is about to blow onto the stage at Ives Park, in Sebastopol. In the Sebastopol Shakespeare Festival’s massively entertaining production of William Shakespeare’s The Tempest, director Sheri Lee Miller lays on the mood with some magically eerie pre-show music, layered beneath the unmistakable sounds of a steadily building thunderstorm. By the time the play actually starts, we’re already into it, as the tempest of the title unleashes on a foundering ship at sea, and the shape-shifting spirit Ariel pulls all the strings of the wind and weather.

It’s a clever, confident beginning to a show that just keeps getting stronger from there. Miller, tackling Shakespeare for her first time as a director, shows a knack for getting to point of each scene, and she’s edited the text to keep the action and character development flowing at a nice, emotionally involving pace.
The Tempest, Shakespeare’s final play, can be a little tricky, which is why scholars consider it one of the Bard’s problem plays. But with a first-rate cast and an able, inventive technical team, Miller and company have solved all the problems, getting straight to the heart of a play that is, after all, a fairly straightforward story: a mistreated father, stranded, on a mysterious island, struggles to create the best possible future for his daughter, and to use what powers he has to right the wrongs that have been done to him.

Actor John Craven plays the good-hearted sorcerer Prospero with a palpably wounded dignity, and a sense of deep conflict, his best intentions warring against his worst when chance brings the very people who once abandoned him within a short distance of his island. With the help of his spirit servant Ariel, played with gracefully fluid intensity by Danielle Cain, Propsero summons a storm to overturn the passing craft, shipwrecking its crew, including his power-hungry brother Antonio, played with amiable menace by Peter Downey.

Also washed ashore are King Alonso of Naples, his dangerous brother Sebastian, Alonso’s son Frederick, and an assortment of nobles and sassy servants, who all end up in different parts of the island, each with their own part to play as Prospero and Ariel alternately enchant and confound the unknowing castaways.
Adding some additional drama is the monster Caliban, The Tempest’s most fascinating character. Played brilliantly by Keith Baker with a fused sense of scariness and heartbreak, Caliban—who lived on the island before Prospero—hopes to use the newcomers in his plan to overthrow Prospero.
Prospero’s own revenge plot turns softer when his daughter Miranda, played with wide-eyed innocence by Rachel Quintana, ends up falling in love, at first sight, with King Alonso’s son Frederick, played with a kind of swashbuckling innocence of his own by Jimmy Gagarin.

The supporting cast is strong, with great comic turns by Eric Thompson and James Pelican as a pair of drunken servants who form an unlikely alliance with Caliban.

The set by David Lear is a stunner, and the sound design by Doug Faxon brings an additional element of magic and mystery to the tale.

In the interest of full disclosure, my son Andy Templeton appears in the show as well, as the young, wonderstruck nobleman Adrian, and of course, Sheri Lee Miller is a frequent and favorite collaborator. She will, in fact, be directing my next play.

Taking that as it may, this Tempest is without question a powerful, eye-popping, relentlessly entertaining show, a deeply satisfying journey to a magical world that, for all its spirits and sprites and monsters, is fully and open-heartedly human.