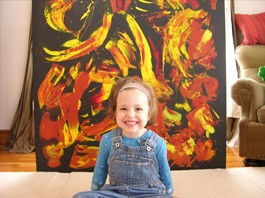 Review: ‘My Kid Could Paint That’

Fascinating whodunnit doc involving a four-year-old and $300,000 worth of fine art.

On camera, Marla Olmstead is one of the cagiest abstract expressionists artists ever interviewed. Olmstead makes a chronically tight-lipped painter like Jackson Pollock seem like a chatterbox. Facing queries about her work habits, the meaning of her paintings or her technique itself, she demurs and tries to turn the microphone over to her brother. When pursued by questions she’d rather not answer, she retreats and gives the camera wide yet shut-off eyes and a thin, enigmatic smile. Even at four years of age, Olmstead knows the right way to deal with the press.

In the documentary My Kid Could Paint That, director Amir Bar-Lev tries to crack the case of the four-year-old artist, whose canvases sold for over $300,000 on the New York art market. Instead, it is Bar-Lev who ends up cracked, baffled by two contradictory propositions.

One is that Marla is a genius who can’t be seen at work, whose true creative process is as hidden from view as Schrödinger’s cat. The other is that Marla is the point-child in a delicious fraud that hoodwinked everyone from the New York Times art page to NPR, as well as serious connoisseurs beguiled by the notion of a pure child working in the cynical and egomaniacal art world.

Maybe we should take Marla’s guidance and concentrate on the art. They are good paintings, whoever did them. Trying to make an abstract painting is an instructive process. After such an attempt, one tends not to echo the philistine comment Bar-Lev uses as his title. Moving paint around is a technical challenge; making the paint do what you want takes time and learning. The canvases we see toward the film’s end are the work of someone with a fine sense of color, depth and motion. They have some value outside of the hysteric and status-driven art market.

But is it all a fraud? The investigative program 60 Minutes 2 suggests so, causing a huge crisis in the Olmstead’s life. The broadcast spurs a flurry of disgustingly vicious hate mail aimed at Marla’s apparently guileless mom, Laura, a dental hygienist, and father, Mark, the night manager at a Binghamton, N.Y., Frito Lay plant. There is a whiff of rat here. Mark does some figurative painting and is seen urging Marla on and Marla keeps insisting that her little brother Zane does paintings as well.

One feels for Bar-Lev, who took on the project as an innocent and ended up as forlorn as Albert Brooks expelled from the family unit in Real Life. Meanwhile, this utterly fascinating and naturally colorful enigma gives one as much to talk about as any movie this year. On a simpler level, one is charmed by the little artist.