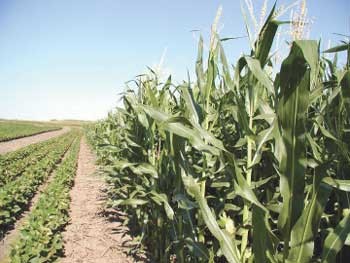 If we run out of oil, we can always grow more corn. Right?

Corn is everywhere. I was shown a government brochure that described all the different uses for corn: swine food, adhesives, industrial wax, herbicides. Read a label for any processed food, and you’ll see corn lurking everywhere, disguised as corn syrup or lecithin.

Though companies like Monsanto strive to increase productivity–higher yielding corn on bigger plots of land–we are not in need of more corn at the moment. According to some commodities brokers I spoke to, last year’s carryover of surplus corn was 2.1 billion bushels! (Each bushel weighs 56 pounds.) People may be starving elsewhere, but in America, granaries are brim-full. In fact, there are so many corn products on the market because of this excess that someone had to invent all those other uses for the surplus corn.

And now a recent ad comes along and tells us to go yellow, specifically through General Motors and its “Live Green, Go Yellow” campaign. “Going Yellow” means using ethanol, a corn-based fuel additive that can be blended in some gas engines at an 85 percent blend. It’s been around for quite a while, but now the money-strapped GM is betting the farm on it. They’ve built 1.5 million flex-fuel cars and trucks already, and seem launched to build more if they can increase demand and convince people to build more fueling stations.

The ads have that wiggly, feel-good quality with up-tempo music. Forget irony or wit–GM wants us to know that this comes from the heart. For those of you who haven’t caught the commercials, here’s a brief breakdown: “Maize” features a series of questions asked by a lone person standing in a cornfield. “What if the answer to our dependence on oil was growing right in front of us?” for example. Their choice of subjects–young and multi-ethnic–speak to GM’s bid for the hip audience. “Volunteers” shows young adults running around Manhattan passing out yellow T-shirts until everyone has one on. It’s a growing trend!

On GM’s website, the video “corncast” shows interviews with people on the street. It’s supposed to feel improvised, as if these people weren’t actors. The brilliant thing about the concept is that no GM executive comes out and has to make a statement of fact; they just let the people speak.

Dumber people I’m not sure we’ll meet any time soon. One guy reminded me of Forrest Gump. “We’re running out of oil, but we can always grow more corn!” he says and then gets a dumb look on his face: “Right?” Right.

At one point, a woman talks with a Toyota Prius parked behind her. I can’t believe the ad makers didn’t do this intentionally, sending some subliminal message about earth-friendliness. If not, then what a goof.

Then the people seem shocked that they can run corn in their engines. “I can never imagine a car running on a corn-based gasoline!” Gump says. Next up a young, cool guy apparently asked the same question assures, “No problem with me.”

Here’s a problem. One-third of greenhouse gases are caused by agriculture. One-fifth of fossil fuel is used to grow and ship food.

“When we eat corn, we’re eating petroleum,” journalist Michael Pollan recently said. The petroleum-based fertilizers that are poured on the greedy corn, the pesticides sprayed on the crops, the combines and the tractors and, finally, the semitrucks that distribute the final product all use or are derived from petroleum products.

The other problem with corn is its inefficiency. According to the Worldwatch Institute, which has studied fuel and energy yields, corn is fifth on the list for productivity after sugar beets, sugarcane, cassava and sweet sorghum. In terms of energy yield, ethanol from corn yields only 1.5 units of energy for each energy unit used. The other bummer is that a flex-fuel engine loses efficiency when running ethanol, so fuel mileage goes down.

However, having said all that, I know we need solutions. We are addicted to oil–even President Bush dared admit that for half a second before getting bitch-slapped by the Saudis. I would hope that a more efficient crop could be used, but in the meantime, we do have piles and piles of corn. So maybe we should use it.