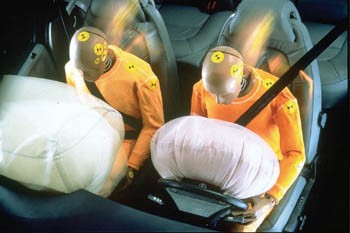 You don’t want to hear about the hijinks that go on at an auto shop. I have firsthand knowledge–after work, Billy gets in the bathtub and gives me the report. He and the guys at the garage spend lots of time playing practical jokes involving the Club, hosting e-brake skidding contests and holding air-bag explosion contests.

This last one really confused me. Bill said they take an air bag out of the car, attach electrodes and give the thing a jolt. The bag fills with air, then explodes and sends particles 20 feet up into the air. Don’t try this at home.

The air bag is, of course, a brilliant invention. Sure, a few kids die every year from suffocating after an air bag discharges, but they shouldn’t have been sitting in the front seat anyway. And some people complain about “air bag exfoliation.” That is, the dermal abrasion caused being essentially punched in the face by an air bag. The point is, most of the time they save lives and reduce injuries during a head-on collision. Ask anyone involved in a major accident if they minded being punched back in their seat, and they’ll defend the air bag as if it were an abusive lover.

Allen K. Breed, a tinker from Chicago, invented the air bag as we know it. He was involved in military engineering and took the triggering device used on landmines and reimagined it for deployment of a gas-filled bag that would cushion car-accident victims. The first system was put into a car in the 1950s, but it didn’t take off until the late ’80s. Breed was inducted into the Automotive Hall of Fame in 1999 for his “ball-in-tube” electromechanical crash sensor, first placed into a car in 1968. The reason it took so long for the bags to catch on had to do with detonation time. The bag needed to be filled with air in 40 milliseconds in order to be effective. That technology took a while to figure out. The answer, it turned out, was found in star anise.

Yes, one of the five Chinese spice ingredients. Sodium azide (NaN³), a chemical partially derived from star anise, is used as a catalyst to blow up the air bags. Air bags are activated when impact forces a steel ball to move along a bore which ignites a detonator cap. Sodium azide then decompresses explosively, filling the air bag with a bunch of nitrogen gas. This all happens in less than a second. Within two seconds, the gas escapes through the vents in the bag and deflates slightly, which allows the people to get out of the car. The puff of smoke? It’s just talcum powder, to lessen the dermal chaffing.

The NHTSA has a strange schematic, which I found disturbing, for what parents should do if they have to put the kid up front. First, restrain the child. (I think they mean use the seatbelt). Second, move the seat back as far as possible. Third, make sure the child doesn’t move out of her position. Finally, the NHTSA suggests a Sophie’s Choice type of decision: “When faced with having to choose which child other than an infant in a rear-facing child safety seat to place in front of an air bag in the front seat, select the child who can be relied upon to remain in the proper seating position.” I’d say: just walk.

It’s a good thing that this painful triage can be completely bypassed with cars that have an on/off switch. Many trucks and cars with small back seats offer this switch as a standard option. If the switch isn’t in a car, the NHTSA can authorize deactivation, but only for medical conditions. The rest of us should use them. Not only do they save lives, they entertain grease monkeys.

Got an airbag horror story? E-mail Rev at [email protected]