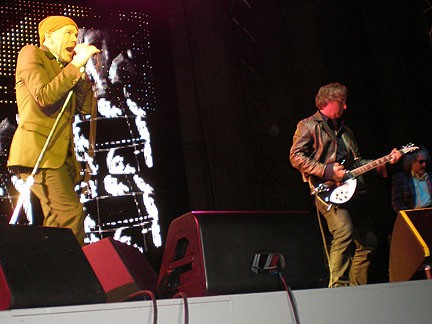 One of the season’s most impressive tour lineups–R.E.M., Modest Mouse and The National–made its way through UC Berkeley’s Greek Theatre last weekend with two packed shows that could’ve been billed as “Three Generations of College Rock.”

Brooklyn wonders The National kicked off the festivities Saturday while still light out but amid a chilly wind that befitted their moody compositions. It was clear from the over-3/4-full house they drew that last year’s Boxer album extended far beyond critics’ best-of lists, with the piano intro to “Fake Empire” immediately drawing rapturous cheers. Despite singer Matt Berninger’s awkward, reserved stage persona – even turning his back on the crowd at points like one of the Reid brothers – his rich Cohen-esque baritone mixed well with his band’s swaying drama, especially compelling in the crescendo of “Baby, We’ll Be Fine” off 2005’s Alligator. Surely many saw a young Michael Stipe in Berninger’s persevering charisma. And having made the most of a crummy slot, The National’s well-deserved standing ovation suggested many new converts.

Although a major draw in its own right, Modest Mouse went over less well with the crowd, in part due to their unvaried setlist, almost seamless in its nonstop pace and tedious, near-identical backbeats. The odd song choices didn’t help either (“Dance Hall”? Really?). Despite two percussionists, an accordion/box organ player, and banjo helmed by singer/guitarist Isaac Brock, the latter’s convulsive performance overshadowed all sounds and sights, with bodily jerks and a halting, often unsettling vocal style (think Frank Costanza from Seinfeld). With Brock playing most leads, new member and guitar legend Johnny Marr was sadly underused, offering only a few of his classic licks in set closer “Spitting Venom”. Oh, well. Marr is probably enjoying such a low-profile gig, if only for some refuge from the endless reunion-with-Morrissey questions.

With no less than three distinct phases in their 28-year career – and fan bases to match – headliners R.E.M. had a lot of varied, multigenerational people to please that night. But the veteran band pulled it off with loose, energetic selections from each of their 15 records except 1986’s Lifes Rich Pageant. Highlights for everyone seemed to be the new songs from the caustic, instantly singalong-ready Accelerate, whose breakneck “Horse to Water” opened the show. Scaled down to a five-piece for the first time since the late 1980s, the band’s setup led to more potent, slightly rawer takes on each song, from 1982’s “Wolves, Lower” to 2001’s “Imitation of Life”, giving each the guitar-based flourishes of their first decade.

Like at the Georgia group’s last show here – back in 2004 on the eve of another presidential election – Michael Stipe was in great spirits and relished being in such a liberal town. “Congratulations,” he told the crowd of California’s recent gay marriage ruling, before replying to calls for the gay singer’s relocation. “I don’t want to move to California; but I’m sure it’ll move slowly eastward.”

This time around, though, Stipe had someaggressive political songs to accompany his left wing rhetoric, with urgent fight songs like “Living Well is the Best Revenge” and “Man-Sized Wreath” inspiring empowerment much better than Around the Sun’s somber, shell-shocked laments (although the poorly aged “Final Straw” still reared its head). A highlight for many was the vitriolic, still-venomous anti-Republican rant “Ignoreland” from 1992’s Automatic for the People, debuting live on this tour with disturbingly renewed relevance. Accentuating every performance was a tasteful video setup behind the band, with multiple jigsaw screens creating video edits of band shots and other stimuli similar to their recent videos.

Despite their catalogue’s eclecticism within just guitar sounds, R.E.M. ran the risk of making the same mistake as Modest Mouse, but busted out the bouncy piano-driven “Electrolite”, which delighted the crowd with a welcome change of pace, and later the gorgeous “Find the River”. The most poignant moment, though, came with the regretful Kurt Cobain tribute “Let Me In”, performed acoustically downstage right, with members facing each other in a circle of supportive, empathetic musicianship.

And the slow songs pretty much ended there, which more than anything harkened back to their glorious I.R.S. days. I’ve been seeing R.E.M. since 1995 and never before have seen bassist/pianist Mike Mills stand up for such extended periods. But the ubiquitous “throwback” comments about this period are misleading, since Accelerate doesn’t really sound like any of their other records. R.E.M. in 2008 is derivative of their hey day chiefly in terms of spirit and onstage abandon. While Saturday showed each member of the band more sprightly than in recent years – even perennially chill guitarist Peter Buck – the stage leaps and running around were kept to a minimum, perfectly dignified for 50-somethings.

With a few charming false starts (it was only the tour’s third show, after all), Mills’ playful ribbing of the nonsensical “West of the Fields” lyrics, repeated allusions to their decidedly uncool age (“This song is from the year 1064” / “off our 75th album”), and Stipe’s verbose, scatterbrain anecdotes, R.E.M. appeared shockingly devoid of any rock-star mystique – which in itself is an impressive feat for any Rock and Roll Hall of Fame inductees.

If any group came close to not getting their money’s worth, it was those looking for the big radio hits, who were offered only a peppy “What’s the Frequency Kenneth”, the still-formidable “The One I Love”, and closer “Man on the Moon”, which still retains its magical, anthemic sheen. But when Peter Buck’s mandolin strings broke a few bars into a perfunctory run-through of the tedious “Losing My Religion”, I’m sure I wasn’t the only one who smiled in glee. Of course a replacement was brought out promptly, so no such luck. Making it worse was Mike Mills’ genuine enjoyment while mouthing along “I thought that I heard you laughing…”. Guess that song’s not going anywhere.

The show was a real treat for older fans and those who’ve done their homework, with “old shit” galore throughout the night, beginning with “Little America” at the show’s start and culminating in the encore with back-to-back Fables“Driver 8” and “Life and How to Live It.” The general consensus is right: the band’s renewed excitement translates well to its audience, most of whom stayed on their feet the entire two-hour show. Hopefully, R.E.M. can keep this feeling going for a few more years.

As I stumbled with out of the Greek with the rest of the cattle, I heard a 20-something telling his friend: “When ‘Life and How to Live It’ came on, I looked around and no one else knew the song…” While nowhere near anyone’s “little secret” anymore, it seems that R.E.M. can still ignite a little harmless fan elitism.–Photos & review by David Sason

19. “Living Well Is the Best Revenge”