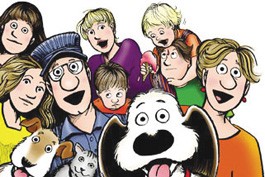 Lynn Johnston, syndicated cartoonist of For Better or for Worse, looks out the window of her lakefront home in North Ontario, Canada. “The lake is frozen solid and the temperature is five below zero. It’s really warmed up in the past few days,” says Johnston. Soon she’ll be in temperate Santa Rosa, appearing with Jan Eliot, creator of the comic Stone Soup, at the Charles M. Schulz Museum. Both women will draw, sign books and answer questions. “It’ll pretty fun and pretty fluid,” says Johnston of the collaboration. “We enjoy each other very much.”

A longtime friend and colleague of Schulz, Johnston fondly recalls Sparky’s advice to her as a budding cartoonist: to do her best work daily, no matter what.

“You can’t let yourself get comfortable with second best; it’s not good enough,” says Johnston. “Someone reads your work every day.”

Adds Jessica Ruskin, the museum’s director of education, “Lynn Johnston has also done something with her strip that most cartoonists don’t do. She has aged her family and explored issues of real life and death. Most comic strip characters, Peanuts included, are captured at one period of time, and they stay there. Many readers have quite literally grown up with Johnston’s characters.”