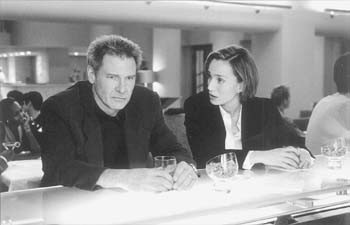 No magic in chilly ‘Random Hearts’

THROUGHOUT the new melodrama Random Hearts, Harrison Ford’s character carries cuckoldry like a cross. In his scenes as a glib political consultant, Sydney Pollack (who also directed) shows us a pugnacious, humane, and world-weary face. Judging from his onscreen performance, Pollack is not exactly the man you’d expect to be so slow, so terminally restrained behind the camera. It wasn’t mentioned much at the time, but Pollack was certainly the best actor in Eyes Wide Shut, a much more tentative movie about adultery than Random Hearts. Pollack looks like a man who could understand how a woman could have sex with her husband in the morning and deceive him in the afternoon. But Pollack doesn’t pass on that understanding to his characters, and throughout Random Hearts, Ford displays an incomprehension that looks like dumbness.

Ford plays Sgt. “Dutch” Van Den Broeck, a Washington, D.C., Internal Affairs policeman who is apparently happily married. When a plane crashes, it is revealed that two of the dead were traveling under assumed names: Dutch’s wife and the husband of a Republican congresswoman, who were having an affair. When Dutch seeks out the congresswoman, Kay Chandler (Kristin Scott Thomas), looking for clues, he falls for the aristocratic woman. He deludes himself into thinking that what he’s actually doing is tracking down the truth about his wife’s secret life.

Warren Adler’s novel spent 15 years in development, and here’s why: the plot is a fine first act that seems doomed in the last two. Forgiven, as it were, by the deaths of their cheating spouses, what’s the logic in the two betrayed lovers staying apart? But it turns out that the congresswoman is facing a tough re-election campaign, and any impropriety can be used against her. There’s also a subplot about Dutch’s cowboylike investigation of a rogue cop. Wearing a discreet earring and a floppy haircut, Ford is meant to be the fiery counterpart to his patrician lover–who is not just a congresswoman, but the daughter of a congressman as well. But Scott Thomas, who hides under the shade of her Dietrich eyelids, is every bit as recessive an actor as Ford is, and the two seem lost in respective snits.

Pollack keeps the film morose and free of humor. Nothing lightens the mood. And the question of Chandler’s principles–her reason for avoiding happiness with Dutch–seems unbelievable. Why is she in Washington, anyway? She herself says she hasn’t got a political record to run on, and she apparently has no politics. And the importance of Dutch’s dirty job as a cop isn’t shown to us either. When you’re constructing an argument between love and duty, it’s best to make that duty clear and strong, instead of vague and distracting. Kay’s highhandedness with Dutch is irritating, even snobbish, and the one scene of a weekend they spend together in an autumn-leaf-covered cabin provides the only brief warmth in a stodgy film.

Eye of the Scion