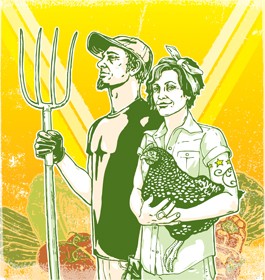 Spinach. Tomatoes. A lone Texan jalapeño. Global warming. The 2008 Farm Bill. Gasoline. The wars in Iraq and Afghanistan. Sure, bad news is made every day, but the sort of bad news we’re reeling from currently is bad news that we’ve brought exactly upon ourselves.

Not much more than a century ago, the United States was largely a rural place. And then we got very good at producing lots of things very quickly. Rapidly, that which we created ourselves in small lots or grew ourselves on small acreage went out of vogue, and prepackaged readymades came into rabid national fashion.

In considering this year’s Arcadia issue, our annual salute to food and wine, we began to warm to the idea of the Victory Garden. Originated by the government during WW II, Victory Gardens provided Americans with some 40 percent of their food during the so-called Good War; Golden Gate Park alone had over 800 plots, and the land across from San Francisco’s Civic Center was a full-blown farm.

Today, the land across from the Civic Center is once again planted with food, as S.F. gears up for the Slow Food Nation convivia over Labor Day weekend, and the wave of vogue is slowly turning back to that which is small, that which is fresh, that which is carefully made with intent.

When something as inoffensive as a tomato, a head of spinach or a little green pepper cannot be trusted as being healthy and safe in our modern-day food supply, it is time to rely once again upon oneself. With such reliance comes other growth. Being able to provide your own transportation and provide your own food, being canny enough to create a true sense of freedom in your life is uniquely patriotic—and essentially American.

With a growing sense of glee, it occurred to us that doing it for yourself is in fact the best way to stick it to the Man. Planting a Victory Garden is a strangely radical act. Something so old-fashioned and innocuous is actually a wild stride toward liberation. Don’t trust that tomato? Grow one in a windowsill, on the porch, in the yard. Worried about systemic poisons in that strawberry? Eat them only in season, buy them only from a farmer, grow them yourself. Don’t like the war in Iraq? Ride a bike and get off the petrochemical death-spiral. Self-sufficiency is a hallmark of American culture—at least it sure used to be.

And from the looks of things, it is once again.

On the following pages, we profile people who follow the radical trajectory of self-sufficiency, giving to others, finding joy in eternal pleasures and creating victory in their own lives and those surrounding them through small, good acts that, when taken together, mount a gorgeous bloom.

Salmonella poisoning, global warming, peak oil, senseless wars and even the 2008 Farm Bill aside, the North Bay in the 21st century is at an exciting point, where the people who are paying attention aren’t just the older generation who shook it all up in the ’60s. It’s also the hipsters, the young marrieds, the tastemakers. Digging in the ground, making it yourself and doing for your own is hip again. To borrow a very old expression: Hallelujah to that.