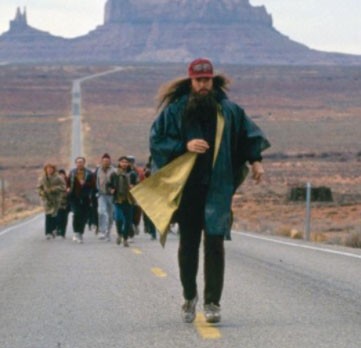 Putting His Foot Down

Art Brown takes to the road for peace

Art Brown isn’t taking this Donald Trump disaster lying down. Nope, he’s standing up and putting on his shoes and walking—clear the hell across the country, from Salt Point State Park on the Sonoma coast, all the way to New York City.

Brown plans to embark on his latest cross-country walking adventure in mid-April—he’s done this before, he says—and reports that he’s going to do a sort of trial run along the northern Sonoma Coast before lighting out east, and to Sacramento, where he hopes to be by April 30.

There he will honor an old friend who died last year. Michael Israel was killed by ISIS in November while he was fighting with the YPG (the People’s Protection Unit) against the ghoulish be-headers of Syria and elsewhere. “It’s a celebration of his life,” says Brown of his proposed journey and departed friend.

“I walked with Michael from Peoria to Washington, D.C., in 2007,” he recalls, to attend a big rally that called for the impeachment of George W. Bush.

Brown figures the journey will take six months and he plans to walk across the George Washington Bridge in Uptown Manhattan by Oct. 24.

“I’m doing this for the people of the world,” says Brown. “I’d be lying through my teeth if I said there wasn’t a sense of adventure in it, but my primary motivation is in bringing awareness and helping people.”