Gen X is in charge of the classroom, and they're not happy with the quo. 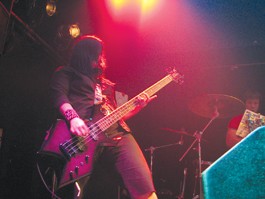 All I want is for future generations to just go, ‘Fuck it. Had enough. Here’s the truth.’—Johnny Rotten, in the Sex Pistols documentary The Filth and the Fury

There are at least two exceptional things about Athena Kautsch. First, she not only teaches various English classes, including a rigorous honors class, at Casa Grande High School in Petaluma, but she also team-teaches “Rebels, Resistance and Revolution,” about history’s rabblerousers. A lot of students fail the course.

Second, Kautsch is also known as Athena Dread (or Athena Cochina) and moonlights playing bass in the thrash-punk band Vöetsek (pronounced “vote-sek”). Legendary and revered in thrash-punk circles, Vöetsek are known for furious, ultrafast, ultraloud songs like the 45-second “Tampons Should Be Free,” an indictment of the hypercommodification of a woman’s most basic and necessary helper. To experience Kautsch teaching English in the all-American, butter ‘n’ eggs town of Petaluma is one thing, but to see her onstage in a dingy venue, abusing a BC Rich Warlock bass guitar to the screams and fury of Vöetsek is quite another. Teachers play in bands, but how many play in punk bands?

It brings up philosophically rich questions. Is “Athena Dread” the alter ego of Athena Kautsch, mild-mannered yet edgy punk teacher, or is Ms. Kautsch the workaday alter ego of Dread, key component and founding member of Vöetsek? Can both identities coexist harmoniously? Aren’t all or most punks basically kind of like Sid Vicious?

With a few clicks of the mouse, anyone can find Vöetsek on the Internet. There are digital slide shows of Athena, smiling, with scruffy-looking musicians and Mohawked fans reveling in post-gig shenanigans. Onstage, Athena is pure concentration, laying down the bass on songs that are over before they begin, full of screamed lyrics and a primal yet evocative awareness.

Today’s teenagers are not surprised to find an aging boomer teacher in many a classroom; a Hendrix poster on the wall and a nostalgic fondness for late ’60s-style revolution is all too common and, with due respect, altogether blasé. In Athena’s classroom, however, one finds a sticker for punk band Capitali$t Casualties on her filing cabinet.

Contrary to the stereotype of the “gutterpunk”—an early 20s fuckup with a small, disoriented pet s/he can’t take care of, filthy hair and clothes and spiky jacket espousing any number of punk bands known or unknown—punk teachers are highly educated, gainfully employed, creatively critical of the American way and American dream. And they’re teaching the future, our children. They release workaday frustrations by playing in punk bands like Vöetsek, Holier Than Thou, Millions of Dead Cops (MDC).

It isn’t really news or noteworthy that teachers, be it high-school or post-secondary, play in bands, but playing in a punk band sets them apart, and with good reason. For why is it that no one bats an eye when the friendly local math teacher busts out a guitar for a sober sing-along of “Blowin’ in the Wind,” but someone like Kautsch has to work diligently to protect her punk identity in the interest of her professional career?

Her teaching side alone stirs up enough controversy with some of Petaluma’s more conservative parents. Casa Grande’s principal, Ron Everett, says that he sometimes receives a pissed-off phone call.

Kautsch isn’t alone. From Chuck Carlson, a Western civilizations lecturer at SSU who shows his students a PowerPoint slide presentation featuring the Clash’s famous London Calling album cover and plays them Clash music, to Casa Grande guidance counselor Brett Sklove, whose office is filled with posters and original flyers for seminal punk bands, there is a small yet vibrant number of academipunks in today’s learning institutions at all levels.

“Punk means to me a sharing of ideas,” says Kautsch, sipping a dark beer at a Cotati restaurant. “My students and I are growing and learning together. Punk rock is not the punk bands you see on MTV; it’s not what bands are playing this year’s Warped Tour. Punk is, however, about being an active member of the DIY community.”

Anarchy, despite what mainstream media say, does not mean chaos, disorder, violence. On the contrary, it works to prevent these things by establishing its own system—by lacking a system at all in the first place.

The connection between punk and academia is nothing new. Philosopher Paul Feyerabend advocated an “epistemological anarchism” in the scientific quest for knowledge. In other words, anything goes in the pursuit and acquisition of knowledge; it’s all fair game. Punks in everyday society can often fly under the radar with their nonpunk, professional lives. After all, one can cover up a Dayglo Abortions tattoo fairly easily with makeup or clothing, but the loosely organized academipunk community is nonetheless out there, a demographic to contend with.

As more baby boomers retire and fade into senior citizenship, Generation X’s general reputation for disaffection, cynicism and postmodernism will eclipse the boomers’ sunnier, modern, lysergic-birthed outlook. What the Summer of Love or Woodstock was to leftist boomers, the golden decade of punk (roughly 1975 to 1985) is to many a Gen X punkademic. This postboom marks a significant paradigm shift, and raises the question of what the current millennial generation will adopt as their own individual and collective philosophy. Until then, a growing number of academipunks are coming out of the woodwork.

Evidently, and thankfully, punk is far from dead.