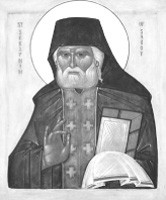 A 4,000-year-old art form is alive and well in Santa Rosa

When Michelangelo was painting the ceiling of the Sistine Chapel, he was using what was even then an old and well-established medium. Frescoes are paintings done on wet plaster, and despite their historic antiquity, they are not just a thing of the past.

Among the contemporary practitioners of this ancient art form is Father Simon Dolan, a 49-year-old monk at the St. Gregory of Sinai monastery near Kelseyville, who, for the past nine years, has been painting a series of fresco murals at the St. Seraphim of Sarov Orthodox Church in south Santa Rosa.

“People have been painting in fresco for at least 4,000 years,” Dolan says, “and I don’t think we’re using it in any way that is substantially different from the way it has been done historically.”

Standing beneath the classical dome that rises 40 feet above the chapel floor, Dolan, a robust yet scholarly figure with a full beard, dressed in a simple black smock that extends to his shins, surveys the lifetime of work that awaits him there.

“Painting a church involves literally hundreds of large-scale paintings,” he explains. “We are going to paint from the very top of the dome all the way down to the floor. So all the walls, all of the arches, all of the pillars, everything except for the wooden timber roof will eventually, God willing, be painted in fresco.”

Fresco painting uses a special plaster made from lime putty, which is created by burning limestone and then plunging the residue, known as quicklime, into water and storing it there. When it’s time to paint, the wet lime putty is mixed into plaster and applied–only as much as can be done in a single day, perhaps an area of 12 or 16 square feet, depending on the amount of detail in the image–and allowed to partially dry before the painting begins.

“Fresco,” Dolan notes, “is an Italian word meaning ‘fresh.’ So what is fresh in the painting is the plaster that is freshly laid. And we’re painting directly on it.”

The first step in that process involves drawing a full-size outline or “cartoon” of the image to be painted. This is transferred to the wet plaster and serves as a guide while the paints are applied. Traditionally, the pigments are natural materials, derived mainly from colored soils, although some manufactured pigments are now available. But it is the chemistry of the lime putty plaster that gives fresco paintings their remarkable durability.

When the lime putty is mixed and spread on the wall, it begins to reabsorb from the air a molecule of carbon that it lost when the limestone was burned. As the plaster dries, “an invisible layer of carbonate crystals forms on the surface of the plaster,” Simon explains. “And any pigments that are ground in water and placed onto the wall while the carbonate crystals are forming become part of the wall itself.”

This requires quick and accurate work, he adds, because “every minute counts and every brush stroke is permanent.” Changes or corrections can only be made by chiseling away the dried plaster, and repeating the whole process.

Large images, such as the dome or an extensive interior wall surface, are done in a series of smaller sections. The borders or “joins” between these sections usually follow the outline of a figure or a line in the drawing, and so become virtually invisible after the sections have cured together.

And there’s another, almost supernatural aspect of the process that happens a bit later.

“A painter does his painting, and over the course of the next few days, without touching the painting, it gets better,” Dolan affirms, smiling at the thought. “As it dries, the plaster that’s underneath the colors becomes a bright white. And so it imparts a kind of luminosity to the colors.”

St. Seraphim’s is a new church building, completed in 1996. But from the beginning of the planning process, it was envisioned as “a grand palette for the fresco work,” says Father Lawrence Margitich, who has led the 70-year-old congregation since 1985. As part of the church design process, the congregation and the artist developed a detailed plan for all of the art that will eventually cover every available surface above the floor. These images, often portraying disciples and other biblical figures as well as numerous saints and prophets, are known more precisely as religious icons, and many have remained essentially unchanged through the centuries.

“Elements of it go right back to the early Christian era,” Father Dolan elaborates. “We can find examples of images that look very similar to what we’re painting here in the Christian catacombs.” Some of the images in those subterranean Christian graveyards date back to the first century A.D.

But icons, in this context, are anything but abstractions. Even the faces of the hundreds of saints recognized by the Orthodox Church represent a form of stylized portraiture.

“These people existed, and so when they’re painted, they’re painted to look as they looked in life,” Simon asserts. “The Church preserves their appearance down through the centuries, handing over that tradition from one generation to another.” Yet within that tradition, “there’s an astonishing kind of variety,” Dolan continues. From church to church and from one artist to the next, “you have unity, but you don’t have uniformity.”

To Father Margitich, the iconographic images represent “the teachings of the church in color and shape.” In fact, he sees the entire church building as a three-dimensional icon in its own right. “It’s an image of heaven, you could say, the kingdom of God populated by saints–religious people from all walks of life–and you are surrounded by them.”

Dolan began his study of iconography as a young art student, and followed it into the church itself. He has been painting murals and wooden icon panels for orthodox churches since 1980, and is now dividing his fresco-painting time between St. Seraphim and another, smaller church in the rural south of France. Together, they will represent his life’s work.

“A muralist doesn’t have but one or two churches in his lifetime,” Dolan says placidly. He looks at the myriad blank spaces that still surround the spacious sanctuary, and the high arc of the dome, where the outlines of the more elaborate artwork to come are already sketched in place. “We’ve been working here for a number of years and we’re maybe a fifth done.”