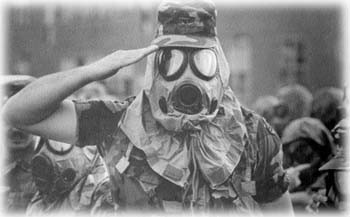 Un-ease, Soldier: Sorry, private, did we forget to mention that deadly radiation?

All the news that gave ’em fits

IT WAS A GOOD YEAR for censorship. One of the most provocative stories of 1996–the San Jose Mercury News series about possible CIA connections to the nation’s inner-city crack epidemic–received more than the usual derision from the media czars at the New York Times and the Washington Post. Those two influential dailies went out of their way to discredit journalist Gary Webb, who had reported new revelations about the alleged link between America’s national security agency, ultra-right wing Contra insurgents, and drug traffickers.

But for fans of Project Censored–the annual review of the year’s most underreported stories compiled by the Sonoma State University­based media watch group founded in 1976–the CIA/cocaine story is old news. It had been the topic of several alternative news stories selected for Project Censored’s 1989 Top 10 list.

“Most of the stories that aren’t covered represent decisions by the powerful corporations and governments in our society that potentially impact us one way or another,” says Project Censored director Peter Phillips, who took over the post this year from founder and SSU professor emeritus Carl Jensen. “These are stories that are not being fully discussed by the press that is controlled by the powerful themselves.”

This year’s list was culled from hundreds of entries by 125 SSU faculty, students, and community experts. The final lists are selected by a national advisory panel that includes, among others, author Susan Faludi; UC Berkeley professor emeritus Ben Bagdikian; Judith Krug of the Office for Intellectual Freedom, American Library Association; and Frances Moore Lappé of the Center for Living Democracy.

Project Censored formally will announce this year’s 10 most censored stories of 1996 on Tuesday, March 25, at 7 p.m. at the Evert B. Person Theater on the SSU campus. Gary Webb will be the keynote speaker. Admission is $5/general, and $3/students. A reception will be held at 6:15 p.m.

Here are this year’s finalists:

The world press had fun with the Chicken Little scenario last year when a Russian space probe packing 200 grams of plutonium-238 broke up in the atmosphere and crashed into the South Pacific. But the news media paid very little attention to NASA’s plan to launch the Cassini probe this year loaded with 72 pounds of the same deadly radioactive substance.

But Saturn-bound Cassini won’t be America’s first use of plutonium-238. At least two other missions–which have received a lot of coverage for their groundbreaking scientific impact, but not for their payload–also carried the isotope to power their batteries in the frigid regions of space. The Galileo probe was launched in 1989 with 49.25 pounds of plutonium on board, and the Ulysses space probe, launched in 1990, carried 25.6 pounds.

Cassini doesn’t have enough propulsion to get it to the gaseous giant, so NASA will slingshot the craft around Venus and buzz Earth at a speed of 42,300 miles an hour and an altitude of just 312 miles (some three times the speed of and at about the same altitude as a space shuttle orbit), using the gravitational pull of our planet to boost Cassini’s speed for its long flight through the solar system.

The problem? If Cassini comes too close to Earth during its fly-by, it could burn up in the atmosphere and rain deadly radiation across the planet. According to the NASA environmental impact statement for the mission, “Approximately 5 billion of the estimated 7 to 8 billion world population at the time of the swingby could receive 99 percent or more of the radiation exposure” if there is an inadvertent re-entry of the probe.

Here’s the catch. The plutonium is not a necessity for the mission, according to science writer Karl Grossman. The plutonium will generate a mere 745 watts of electricity to run scientific instruments, a task that could be accomplished with solar energy technology expected to be available within five years.

In the wake of Nigeria’s execution of nine environmental activists involved in protests against the Royal Dutch/Shell Group in southern Nigeria’s Ogoniland, including Nobel Prize winner Ken Saro-Wiwa, evidence has mounted that the Shell Oil Co. not only failed to use its influence to prevent the unjustified executions, but also contributed to unfair trials for the activists.

The protests began in October 1990 when Nigerian villagers occupied part of a Shell facility, demanding compensation for farmlands that had been destroyed by Shell. Military forces summoned by Shell’s division manager fired on the crowd, killing nearly 80 people and destroying or severely damaging 495 homes. A Nigerian court later called the protests peaceful. Shortly afterward, Saro-Wiwa formed a movement to continue protests against Shell. Still, Saro-Wiwa and the others later were charged with fomenting civil unrest.

According to opposition activists, Shell’s managing director offered to stop the executions only if Saro-Wiwa would cut a deal and call off the protests. He refused and Shell did not intervene. Meanwhile, the Village Voice reported that two key prosecution witnesses were offered bribes by Shell officials to give unjustly incriminating statements against Saro-Wiwa and that the oil giant has been bankrolling the Nigerian military’s efforts to quash the protests.

In response, Shell has launched an international publicity campaign to combat the negative reports.

Nigeria’s government, under the dictatorship of General Sani Abacha, gets 90 percent of its foreign revenue from oil exports. The United States, home to the Houston-based Royal Dutch/Shell Oil Co., imports about half of Nigeria’s oil.

Big perks for the wealthy were hidden in legislation that boosted the federal minimum wage last year from $4.25 to $5.15 an hour. In fact, the Small Business Job Protection Act of 1996 harbored at least 10 significant provisions that helped neither the owners of small business nor their employees.

The new bill helps the rich by eliminating a surtax on yachts, luxury vehicles, and one-year pension withdrawals over $150,000. It also reinstates tax incentives that encourage leveraged buyouts axed by Congress in its 1986 tax reform legislation and retroactively allows companies to claim tax deductions for exorbitant fees paid to investment banks and advisers. It also weakens retirement and pension protection by eliminating the requirement that companies must offer the same benefits to lower-wage employees as to higher-wage employees.

American corporations are spending millions on public relations firms and false non-profit organizations that target activists and legislation considered bad for big business. Most of these bogus organizations focus on labor, environmental, and consumer issues.

For example, the Health Insurance Association of America not only supported but created the Coalition for Health Insurance Choices to defeat the Clinton administration’s attempt at health-care reform. In the environmental arena, “greenwashing” corporations are using “Astroturf lobbying” to create synthetic grassroots movements.

These anti-public interest campaigns generate the false impression of public support. As a result, dissenting voices are muffled, scientifically proven unhealthy chemicals and practices are legalized, and public opinion is profoundly influenced.

White-collar crime costs America 10 to 50 times more than street crime, yet the federal Department of Justice takes little interest in the problem. Meanwhile, the U.S. Chamber of Commerce and the National Association of Manufacturers continue to complain that corporations are burdened by heavy-handed regulations and are calling on Congress to scale back environmental, health, and safety laws.

Based on DOJ records, the federal government almost never brings criminal charges against big businesses. Of the more than 51,000 federal criminal indictments filed in 1994, only 250–less than one-half of 1 percent–involved criminal violations of the nation’s environmental, occupational health and safety, and consumer product-safety laws.

In 1987 alone, 50,000 to 70,000 workers died prematurely from on-the-job exposure to toxins, roughly triple the number murdered the same year.

In 1995, record bank mergers–that saw Chase Manhattan and Chemical Bank join to create the nation’s largest bank with $300 billion in assets, and First Interstate and Wells Fargo create a giant $100 billion bank–led to the huge consolidation of the America’s banking resources.

The reason: The Federal Reserve has failed to apply a requirement to test how well the public is being served by the mergers. The result: 71.5 percent of U.S. banking assets are controlled by the 100 largest banking institutions. The implication: a banking system in which big banks are acquiring “too big to fail” status. The federal reserve requires that banks cover just 1.25 percent of insured deposits. Consequently, the bailout of a megabank would come straight from taxpayers’ pockets.

Worse yet, the trend toward megabanks is closing out community access and making it harder to get loans.

7. Cashing in on Poverty

Corporate America is reaping the rewards of a poverty business that preys on the destitute. An estimated 60 million poor people in the United States, without bank accounts or access to competitive-rate loans, must rely on pawn shops, check-cashing outlets, rent-to-own stores, finance companies, and high-interest mortgage lenders.

Those businesses generate $200 billion to $300 billion in annual revenues and are increasingly owned or subsidized by such Wall Street giants as American Express, Bank America, Citibank, Ford Motors, and Western Union.

The enterprise is so lucrative that in 1993, Ford Motors derived three-fifths of its earnings from car loans, mortgages, and consumer loans–outstripping its car sales division. In fact, non-bank finance companies like Ford make small loans at rates as high as 300 percent in some states.

New technologies are placing large segments of the population under surveillance in a trend that is making social satirist George Orwell’s predictions a reality in the so-called free world.

In Britain, nearly 150,000 closed-circuit TV cameras are monitoring the population with powerful zoom lenses that can read a cigarette pack label from 100 yards.

Another type of camera under development can penetrate clothing to search for concealed weapons without the knowledge of the target. The manufacturer of that device reports that he has been flooded with calls from interested law enforcement agencies, though the device has raised new questions about its violation of the Fourth Amendment, which protects against unreasonable search and seizure.

Meanwhile, new biometric technologies, already being tested by U.S. Immigration authorities, can measure such personal characteristics as fingerprints, retinal patterns, and the geometry of the hand.

No Tanks: The U.S. Army used depeleted uranium shells in the Gulf War. Just one catch: Nobody bothered to tell the tank crews about the danger.

During the Gulf War, the U.S. Army deployed depleted uranium weapons, used to penetrate tanks and other armored vehicles, for the first time on the battlefield without warning troops about possible dangers of contamination.

A memo warning that tank crews should regard targets hit by the hardened DU penetrator rounds as contaminated wasn’t issued until eight days after the end of the 1991 air and ground conflict. Unaware of the danger, the 144th Army National Guard Service and Supply Company performed DU cleanup for three weeks in Kuwait and southern Iraq, where the U.S. Army fired at least 14,000 rounds of DU ammunition.

According to Nuclear Regulatory Commission records, steady transfers of DU shells have been flowing to Britain, France, and Canada during the past decade.

The world’s stock of rice, wheat, corn, and other grains has fallen to its lowest level in two decades, leading to projections that world grain prices will double by 2010.

This slide from surplus to scarcity parallels the increasing diversion of water from crop irrigation to use in crowded cities. Thus, as the world population grows and there are more hungry mouths to feed, there also is less land and water available for cultivation of food supplies.

In developing countries, the food shortage will become even more acute because the November 1996 World Food Summit–convened for the first time in 22 years by the U.N. Food and Agricultural Organization–decided that poor countries will be responsible for feeding their own people without the aid of wealthier nations.

However, the World Bank and FAO’s predictions of continuing surpluses contradict those of the Japanese Ministry of Agriculture and other observers, leading to difficulty in mobilizing support for investment in agriculture or family planning that could stabilize population growth.