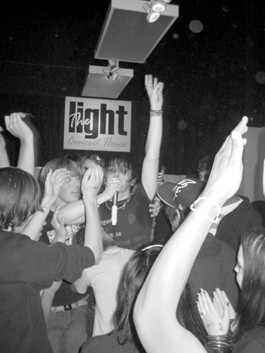 The kids may not be getting the message but it's there if they want to hear it.

Your brain is clay, what’s going on? / You picked up a Bible, and now you’re gone / You call it religion, you’re full of shit—Minor Threat, “Filler”

Michael Conrad stands outside the Light concert house on a recent Friday night, watching a friend’s hardcore band through the windows and expressing his hesitation about the downtown Christian venue.

“I just think it’s disturbing,” he says, explaining his refusal to give a $5 cover charge to fund a possibly missionary program. “Somewhere in there,” he worries, “the goal has got to be for the people running this to interest kids in coming out to church and becoming Christian.”

Conrad’s sentiments echo concern among local underground bands about what has emerged as the latest all-ages venue in Santa Rosa. The Light has existed for over three years presenting contemporary Christian music, but Epiphany Music’s demise has brought a sudden outreach to a younger, non-Christian demographic of hardcore, metalcore and rock bands. Conrad, guitarist and frontman for the band Litany for the Whale, calls it infiltration.

In a city where all-ages venues are a valuable commodity, many young bands like those on tonight’s largely non-Christian bill are willing to trade the Light’s religious bent for stage time. But Litany for the Whale (among others, including Polar Bears and the New Trust) have turned down the chance to play, citing the oxymoronic nature of “Christian hardcore.” Historically, the very fabric of punk and hardcore music has been woven with an antiauthoritarian ideal of the autonomous self rising above the conformity of religion, and mixing the two is a recipe for hypocrisy.

Stephen Saucier, the booker for the Light, doesn’t see it that way, citing the hands-off nature of his concerts—no prayer circles, no preaching, no pamphlets or scriptures on the walls. “I’m really here to just do something for these kids,” he says while the next band warms up. “This is the ministry I feel called to, to be here and build relationships with these kids and love them. I’m not shoving anything down their throats. I’m not pressuring anybody to change anything about what they do. I’m really just here to try to be an example of the love I feel to them.”

Saucier, 21, speaks with an easygoing, metered determination, wearing jeans and a black Social Distortion T-shirt. A musician himself, he volunteered at the Light for a year before he convinced those in charge to let him book younger, more aggressive bands, hoping to create a haven for kids who are alienated because of the kind of music they listen to. “They’ve been ostracized and really kind of left in the cold,” he says, “not loved the way I feel like Jesus Christ would have loved them.

In an earlier hardcore era, this would sound absurd, as keynote bands like Born Against, Econochrist and Christ on Parade completely disemboweled Christianity. Yet the Christian hardcore scene has managed to flourish into a nationwide movement largely indistinguishable from its secular counterpart. With names like As I Lay Dying, With Blood Comes Cleansing, Underoath, Hopesfall, Haste the Day and It Dies Today, the genre’s best-known bands play music full of screaming, volume and anger. It’s even acceptable, almost encouraged, to intentionally obscure religious affiliation. (Saucier insists that “most good hardcore bands are Christian.”)

“I know that the punk scene, as per my knowledge, is kind of nonexistent right now,” says Saucier. “And it’s a bummer to me, because it’s the music that I like. I come from an old-school sort of punk, real hardcore background—Minor Threat, stuff like that. I love that music. And I think a lot of the ideals it was founded on probably do go against the grain of Christianity. But I don’t believe that Christianity is my savior, I believe that Jesus Christ is.”

Bands need not be Christian to play the Light, but they’re nonetheless expected to be positive in their content. Saucier asks the bands to try not to swear, with varying results. Saucier admits to worrying that a prankster band will hit the stage and unleash a torrent of obscenity. “Every night,” he says, “I think, ‘OK, someone’s gonna do it.'”

Later, Saucier gets more than he bargained for when Alphabetix, a female hip-hop duo from Portland, storm the stage unannounced. Though the raps are mostly obscenity-free, the final song does the trick: both girls completely unzip their pants to reveal oversized tufts of fake pubic hair before launching into “Fur Bikini,” a song explicitly touting the pleasures of avoiding the Brazilian wax. Saucier looks nervous, but the crowd goes nuts, and no parents complain.

Most bands more typical of the scene are toned-down, almost harmless. A Christian screamo band from Concord, Dreams Die First, are also on the bill tonight, with singer Jon Leyden replete in tight pants, eye makeup, studded belt and early MySpace haircut. “I don’t know if this club has a rule about dancing,” muses Leyden. “Can you guys do that here?” The crowd of about 50 cheers, but when the song starts, no one moves; instead, they hold digital cameras, looking bored, waiting to go home to upload the photos online.

The band blister with volume and speed, and Leyden’s fierce growl fills the room. But between songs, he’s coy and affected. He apologizes pointedly for his fly being down, and in the same quasi-ribald fashion teases the guitarist with a suggestion to strip off his clothes. It’s about as tame as tame can get—except that between songs, he sometimes utters the word “hell.”

Back outside on the sidewalk, Conrad rolls his eyes. “In the hardcore scene especially, Christians have been invading for a while,” he rues. “They’re trying to play this music which is based on rebellion and always has been. It’s a little frightening.”