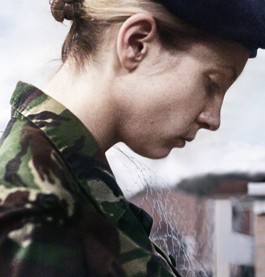 Knotted Union Jacks hung on a line twist in the wind in an early shot in In Our Name. Director-writer Brian Welsh takes us on a tour of the home front in Newcastle, Northeast England: a lonely coast, deserted brick rowhouses, scarred with graffiti and sealed closed with metal plates. It’s not a place where people are usually sweet to each other, in short.

Pvt. Suzy Jackson (Joanna Froggat) has just returned from a tour in Afghanistan. She has family waiting for her: a darkly handsome husband, Mark (Mel Raido), who is also a vet of Iraq, as well as a young daughter slow to forgive her mother for going away.

In many movies about a soldier’s return, the wife dwells in the shadow of the man and his stresses. Welsh intelligently reverses the angle and gives this material a novel bend. The husband is the one who starts to come out of the shadows, teased out, as it were, by his chums, who like to needle him about what Suzy got up to when she was in Asia. (These boozing chums call this kind of talk “honesty.”) All it takes is the appearance of Suzy’s old army buddy (Andrew Knott) to bring Mark’s rage to a boil.

Froggat, who is excellent, subtly builds her own character’s estrangement and overreaction. There are unbelievable passages, though; one has Suzy brought to near-breakdown during the course of a show-and-tell class. Teachers everywhere will reject the idea that someone in their profession would let young students press a visiting soldier with questions like “Did you shoot anyone?” Unquestionably, the debuting Welsh actress is a talent to watch; Froggat’s restraint and fear is completely believable, and the serious plight this drama honors is summed up in a somber closing title.