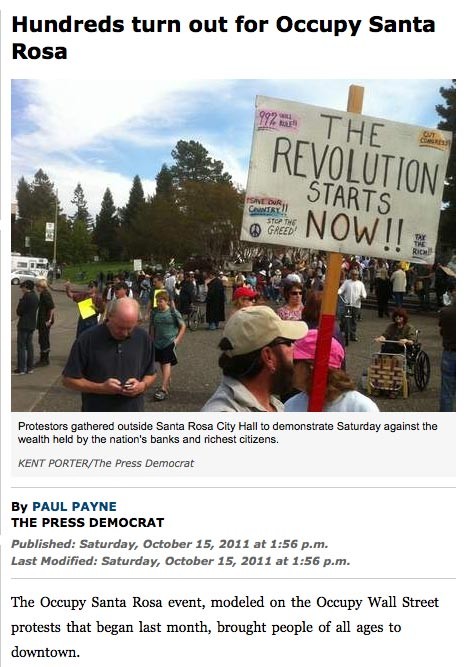 Those who returned home from Occupy Santa Rosa on Saturday and checked local media coverage might have been perplexed at the Press Democrat‘s featured top story online. “Hundreds turn out for Occupy Santa Rosa,” read the headline, accompanied by a photo of a small crowd in front of City Hall.

I scratched my head, too. I’d been there right at 2pm, when the event started, and it was so crowded I could barely move. The crowds spilled out onto all four corners of the intersection. There were easily thousands of people there, right from the beginning. What the hell? Was the photo taken at 1:30, while people were setting up, I wondered?

Then I checked the timestamp on the article: 1:56pm. Meaning yes—a headline had been written, a photo had been taken, and an article reporting on the event had been posted before the event even took place.

Sadly, this practice is all too common in the internet age of journalism. Here’s why: Google’s algorithms choose search result rankings based in part on which news article is posted first. Therefore, news outlets and blogs will often preemptively post a story with nothing but a headline, tags, and minimal content, just to be first in line. Who cares if the facts are wrong? Writers can always add to or change the text later, and in the meantime, the permalink keeps its place in search rankings.

The Press Democrat headline stayed in place for several hours, leading commenters to state the obvious: “Hundreds? Try thousands,” and, “Were you even there?” (In this, I can only sympathize with Kent Porter and Paul Payne, both respected PD veterans who were likely pressured by an overzealous editor to turn in the story and photo ahead of time.)

The headline was eventually changed, of course—at 2,750 people, Santa Rosa’s attendance was sixth-highest of all the “occupy” events in the entire country on Saturday—but the “hundreds” figure stayed up all afternoon, plenty of readers saw it, and the Press Democrat looked very, very foolish.