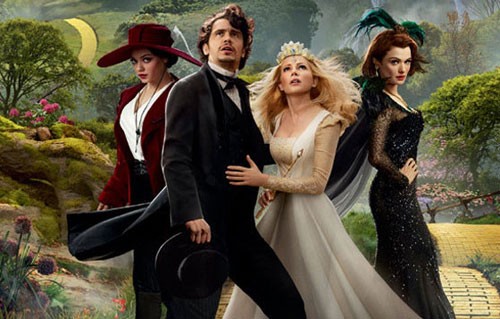 ‘Oz the Great and Powerful’ has built quite the big hype. For the past month, movie trailers have been playing nonstop on Hulu, and ads for the movie have been everywhere. The movie is a prequel of sorts to The Wizard of Oz—helllooooo, Wicked—and it gives Oz fans the chance to see the imagined back story of their favorite characters, before Dorothy’s visit to the yellow brick road.

The film stars James Franco as the heartbreaker circus magician with a hidden agenda, and follows his journey into the Land of Oz. In this movie’s telling, prophecy has arrived to the citizens of Oz that a great wizard bearing their land’s name will come restore peace. This wizard is meant to live a luxurious life in the great emerald palace—and of course, this sounds like a dream come true for a slightly selfish magician with nothing to lose.

Mila Kunis steals the show in the role of Theodora, who later becomes the wicked witch of the west. Kunis starts off as a good witch, the sister to the evil witch Evanora, who loves to leave large paths of destruction. Theodora is a kind woman who wants nothing more than to restore peace to the land. She’s the first person Oz meets on his journey, and falls for him instantly.

When push comes to shove, will Oz be the Wizard this magical land needs? What made the good witch go bad? Not that I can give away those sorts of spoilers, but I can answer one question: does this film live up to the buzz? Yes.

One other thing: the 3D experience is recommended for Oz fanatics who want to get up close with the colorful scenery.