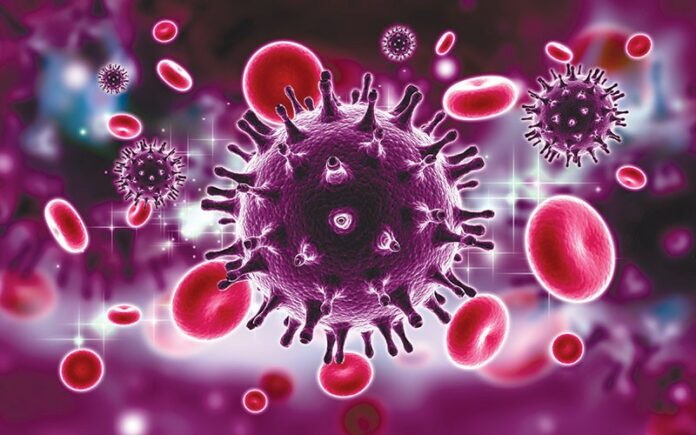 Researchers have found that the chemical tetrahydrocannabinol (THC) in marijuana could potentially slow the process of mental decline that affects up to 50 percent of HIV patients.

“It’s believed that cognitive function decreases in many of those with HIV partly due to chronic inflammation that occurs in the brain,” says Norbert Kaminski, director of the Institute for Integrative Toxicology at Michigan State University and lead author of the study, which appears in the journal AIDS.

“This happens because the immune system is constantly being stimulated to fight off disease,” Kaminski says.

Kaminski and his co-author, Mike Rizzo, a graduate student in toxicology, discovered that the compounds in marijuana were able to act as anti-inflammatory agents, reducing the number of white blood cells, called monocytes, and decreasing the proteins they release.

“This decrease of cells could slow down, or maybe even stop, the inflammatory process, potentially helping patients maintain their cognitive function longer,” Rizzo says.

The two researchers took blood samples from 40 HIV patients who reported whether or not they used marijuana. Then they isolated the white blood cells from each donor and studied inflammatory cell levels and the effect marijuana had on the cells.

“The patients who didn’t smoke marijuana had a very high level of inflammatory cells compared to those who did use,” Kaminski says. “In fact, those who used marijuana had levels pretty close to a healthy person not infected with HIV.”

Kaminski has studied the effects of marijuana on the immune system since 1990. His lab was the first to identify the proteins that can bind marijuana compounds on the surface of immune cells. Up until then, it was unclear how these compounds, also known as cannabinoids, affected the immune system.

HIV infects and can destroy or change the functions of immune cells that defend the body. With antiretroviral therapy—a standard form of treatment that includes a cocktail of drugs to ward off the virus—these cells have a better chance of staying intact. Yet even with this therapy, certain white blood cells can still be overly stimulated and eventually become inflammatory.

“What we learn from this could also have implications to other brain-related diseases like Alzheimer’s and Parkinson’s, since the same inflammatory cells have been found to be involved,” he adds.

Knowing more about this interaction could ultimately lead to new therapeutic agents that could help HIV patients specifically maintain their mental function.

This article was originally published by Futurity.or