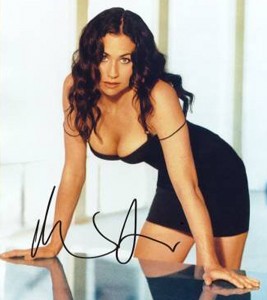 Drivers Him Crazy: Please make the Minnie go away.

Five things that de-tune my day

At the risk of sounding like a total curmudgeon, here are five music-related offenses for the complaint department, little things that should have remained in the background but somehow shot to the top of the white-noise heap. May I speak to the person in charge, please?

1. The people who program in-store music at Borders Books & Music. Wandering around the mega-chain’s San Rafael outlet, intent on spending some hard-earned cash, I was confronted by an insipid acoustic version of Bruce Springsteen’s ode to quiet desperation “Hungry Heart.” Only this new acoustic rendition is sung by Minnie Driver–yeah, that Minnie Driver, the British actress whose screen credits include the God-awful film adaptation of Andrew Lloyd Webber’s musical The Phantom of the Opera.

With 32,000 employees working at 500 outlets and $3.7 billion in worldwide revenue, can’t the Borders Group Inc. find someone with enough sense to keep Minnie Driver away from the buying public? What about those smart guys who write the pithy little reviews posted on the shelves of the Borders’ CD section? Surely, one of them can figure out that Minnie, the singer, is at best (I pray) a passing blip on the pop-music scene.

2. The FCC. No, not because chairman Michael Powell sucks up to the entertainment giant Clear Channel Communications. (Among other despicable acts, Clear Channel recently posted an open letter to viewers of David Letterman complaining that the late-night comedian had based a joke on what Clear Channel claims is an error-ridden article that appeared in Rolling Stone stating that it “controlled” concert bookings in key cities; the magazine stands by the article.)

In a more local vein, the FCC earns my ire because they are completely insensitive to the fact that many residents of West Petaluma (of which I am one) can not pick up KALX, the UC Berkeley college radio station, because the FCC a few years ago decided to allow both KRCB and KCSM to boost their signals in the area on the same frequency that KALX broadcasts (97.1-FM). The result: I pick up all three stations simultaneously on my car radio–and the postmodern quirkiness of that effect grew tiresome long ago.

3. Local radio DJs who use canned online subscription services as source material (and you know who you are). Why is it important to know that today is Chuck Berry’s birthday? How does that information uplift or fulfill listeners? I don’t care what day Chuck Berry was born. Or Peter Gabriel. Or Ann Wilson. Or the faceless bass player in Wilco. Why not share some real insights gleaned from your 30 years in the music business? Oh, that’s why . . .

4. Top 10 lists. I’ve been just as guilty as the next guy of tormenting readers with these exercises in mental masturbation (and sucking up to publicists), but I abstained this year. And I’m glad I did. In a recent Nightwatch column for the Missoulian, music critic Joe Nickell points out that while you can find plenty of curiosities on those lists, almost no one agrees what constitutes a worthy CD title. That’s how the New York Times can ordain U2’s (mediocre) new release How to Dismantle an Atomic Bomb as pop album of the year, when that CD didn’t even make Amazon.com’s Top 100 Editors’ Picks for 2004.

The culprit: no one has time to listen to the 25,000 titles released each year. “Even for the most music-obsessed aficionado, there’s only so much time in a year to listen to music, 5,840 hours, to be exact, if you figure eight hours of sleeping time per day,” opines Nickell, who apparently is never without his iPod. “To assess the quality and staying-power of an album, I personally feel one has to listen to it at least five times, all the way through. Figure an hour of music per album, and that means that one can only consider a maximum of 1,168 different albums in a given year, and that’s assuming one has the endurance and financial independence to commit 16 hours per day, every day of the year, to closely listening to new music.

“More realistically, it’s probable that the most committed music critics around the country only manage to commit that effort to, at best, 40 or 50 new albums in a year. Of those, plenty will turn out to suck.” You can take that to the bank.

5. Music venues that don’t e-mail their entertainment calendars to people on their mailing list. Suffice to say that if the Sweetwater Saloon in Mill Valley had informed me last week that keyboardist, songwriter and producer Al Kooper–whose extraordinary rock ‘n’ roll résumé includes stints with the Beatles, the Blues Project, Bob Dylan and Lynyrd Skynyrd, to name a few–was playing at that cozy nightclub on the night of Jan. 12, you’d be reading an interview with him right now instead of my pet peeves. Now, that’s something to complain about.