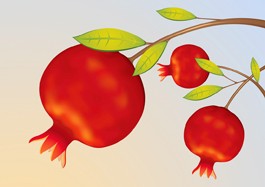 The pomegranate is the crazy aunt of fruits. It’s talented and passionate, but misunderstood. But it has not always been this way. The scabby orb’s blood-red image decorates the temple of Solomon and the robes of priests, its juice is imbued with medicinal properties and its flavor is integral to many Old World cuisines. But in the New World, the pomegranate’s reviews have been mixed. Its flesh, tart enough to make you wince, is buried among bitter membranes and crunchy seeds. Its juice is quick to splatter and stain. Getting to know the pomegranate’s virtues is messy, painstaking work. Yet it’s entirely worth the trouble.

The pomegranate runs in many of the same circles as the grape. The two fruits co-star in several Biblical verses, including more than one suggesting the presence of pomegranates and grapes as an indicator of good land. Great chefs sprinkle pomegranate seeds atop their finished dishes, knowing that a single seed is like a sip of wine in the mouth, creating fireworks when chewed into rich food, from stuffed pork loin to mushroom linguini.

Brought to the Americas by Spanish settlers, pomegranates grow in the Southwest and Mexico, and ripen from September to January. Pomegranates’ shelf life can be extended for months by wrapping them in paper towels and storing them in a paper bag at the bottom of the fridge where there isn’t much activity. You want to leave the wrapped pomegranates undisturbed, with as few vibrations as possible. Like bottles of wine, the less they’re disturbed, the better they’re preserved.

When selecting pomegranates, look for firm fruits with rounded rather than sunken skins. Avoid supersized fruits, which typically don’t have as much flavor. Like wine grapes, pomegranates cultivated for size produce a more watery fruit, with less evident terroir. So choose from batches of baseball-sized fruits. Pomegranates don’t have a fragrance when ripe. The best way to determine the quality or ripeness of a particular batch is to open one. If the seeds are brilliant ruby red, juicy and sweet, then get some more from the same batch for long-term storage.

Many recipes pair pomegranate with walnuts. Historically, they’re grown in the same regions, and culinarily, the flavors complement each other beautifully. Walnuts are astringent and oily, while pomegranates have a penetrating, acidic sweetness. Pomegranate seeds are used to accent sopa de nuez, a Spanish creamy walnut soup; they’re sprinkled atop chiles en nogada, a Mexican dish of stuffed chiles and walnut sauce; and they’re ground with walnuts and red pepper to make muhammara, a Persian dip.

Perhaps the most famous pairing of pomegranate and walnuts is fesenjan, a meat stew with ground walnuts and pomegranate juice. Fesenjan can be found throughout the Middle East and Central Asia, from Georgia to Iran, Armenia to Azerbaijan. Fesenjan is typically made with chicken or lamb. I’ve tested batches with turkey and wild duck without complaints.

To make fesenjan, start by browning your meat in a pan with oil. Large pieces should be cut into inch-cubes; chicken drumsticks can be left whole. Remove skin from poultry.

After the meat has given up its water and browned, add the onions and fry until they become translucent. Add the ground walnuts and four cups of pomegranate juice. Reduce heat to simmer and add seven cardamom pods (or a teaspoon of ground cardamom), a teaspoon each of cinnamon and salt, and half a teaspoon of black pepper. Add a cup of chicken stock, and enough water to submerge the meat. As it simmers, add water as necessary to cover the meat. After an hour, add the juice of one lemon. Many recipes suggest adding a little sugar. I don’t think that’s necessary, but add a tablespoon if you want.

After another hour, when the meat is falling-apart tender and fully impregnated with the pomegranate-walnut sauce, cease adding water and allow the sauce to reduce, stirring often to prevent burning. When the sauce is thick as melted ice cream, remove from heat and serve fesenjan with rice.

Given the current health craze attached to pomegranate juice (some of its constituents are thought to help prevent cancer, diabetes, heart disease, prostate problems and viral infections), you should have no trouble finding it at your local store. Concentrated juice (aka syrup) is widely available in Middle Eastern, Persian and Central Asian markets. The syrup can be diluted with water into juice.

In addition to its role in dishes like fesenjan, pomegranate juice makes a good base for a marinade, and can be used in salad dressings or as a mixer.

The word “pomegranate,” a combination of the Latin words for “apple” and “seed,” literally means “seeded apple.” Although apples and pomegranates have little in common, their external resemblance may help explain why modern depictions of the forbidden fruit that tempted Eve often look like an apple, while many Biblical scholars believe it was a pomegranate. Yet another example of the pomegranate’s perennially misunderstood status.

And while the pomegranate may have gotten Adam and Eve banished from the garden, in another myth, eating pomegranate seeds forced the goddess-borne Persephone to spend half of her life in hell.

Either the pomegranate is really bad news or the gods are really jealous of it. You decide.