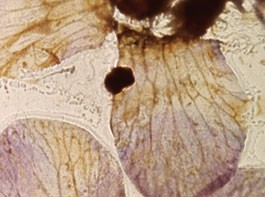 Stan Brakhage gets the Criterion treatment

By turns hermetic, baffling and universal in scope, the films of Stan Brakhage (1933–2003) belong to the once-heroic, now-neglected genre of experimental films. Brakhage’s films, mostly short (under 30 minutes) and almost all without any soundtrack, turn completely away from the narrative strategies we are accustomed to absorbing. They don’t tell “stories,” there is no acting, and continuity of action and image is abandoned. Instead, they are extended visual meditations or poems of seeing, fashioned from found footage, his own 8 mm and 16 mm shoots and even animated objects—he laboriously taped insect wings and organic detritus to a film strip and ran it through a projector for Mothlight, a famous example of a film that doesn’t represent something else but is the thing itself.

Through a wide range of techniques, Brakhage created fast-flashing, densely layered swirls of images. Often, fleeting snippets of recognizable people and places are intercut with passages of pure abstraction, as Brakhage painted and scratched directly on film emulsion.

By Brakhage: An Anthology, Volume Two (Criterion Collection; $39.95), an immaculately remastered three-disc set, adds 30 more samples of Brakhage’s extensive oeuvre to the first volume (which contains his most famous work, Dog Star Man). This collection ranges chronologically from a 1955 collage of New York City streets, The Wonder Ring, commissioned by artist Joseph Cornell, through 23rd Psalm Branch, a major contemplation on violence and war, all the way to selections from his astonishing Persian Series of the late ’90s, gorgeous, kaleidoscopic hand-painted films that play like stained-glass windows animated to a fever pitch.

Most accessible are the cosmic landscape collages, for instance, Vision in Meditation #2 (Mesa Verde), which captures the timeless mystery of the Anasazi cliff dwellings of the Southwest in shifting panoramas of stone and clouds. I prefer Brakhage at his most abstract. The best of these are like Jackson Pollocks come to frantic life. I Take These Truths (1995) is a 17-minute epic of intense bursts of color and light erupting in a warp-speed torrent from the darkness; it could be our only record of the big bang itself.