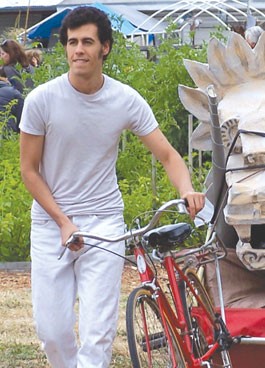 As theater artists have been saying for centuries, there is no single way to define what theater really is. From Kabuki to Greek tragedy, from grand opera to English panto, from vaudeville acts to weird solo performance art, theater is whatever it wants to be—or needs to be—at any particular moment.

Few companies know this as well as Santa Rosa’s Imaginists Theatre Collective, a feverishly eclectic troupe of actors, artists and holy madmen and madwomen who’ve been causing an amiable ruckus in their tiny storefront theater space near Juilliard Park for the last few years. The thing about the Imaginists is that they rarely muck about in the same waters twice, routinely changing up everything they do, from the type and style of show they present to the formation of the seats in their surprisingly adaptable theater.

On occasion, they even lock up the shop and take the show on the road, as with their annual summertime bicycle tour of local parks and gardens. In fact, the Imaginists newest rule-breaking extravaganza, a spectacle titled Everybody Eats, was inspired two years ago when their bilingual Art Is Medicine Show stopped by Roseland’s Bayer Farm. Right in the heart of the uber-urban Roseland, Bayer Farm is six acres of farm and community garden, overseen with loving care by LandPaths—and as it turns out, it’s a pretty nifty spot to stage a play.

Especially a play about food.

Everybody Eats, running for two days only in late September, is a collaboration between Landpaths, Bayer Farm and the Imaginists. Co-titled Todos Comen, the show will be presented in Spanish and English, and is performed in various locations within the garden.

Everybody Eats is being created from the ground up by its many actors and other participants. Grown organically, as it were, the piece springs from a series of conversations about the meaning of green space, the natural world, the power of working in the earth and, of course, our emotional connection to food. The production is sponsored in part by a grant from Theatre Bay Area, which awards innovative theater groups engaged in bold new approaches to performance.

Beyond that, details are scarce on exactly what Everybody Eats will be like, except that it will be unlike anything the Imaginists have done before.