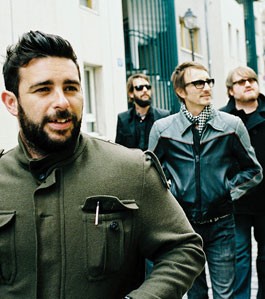 Band of Horses take nothing for granted

ROYAL FLUSH: We admit it: playing poker with Willie would be damn cool.

One perk of being an up-and-coming rock star is that you usually still feel a sense of awe at the surreal adventures that pop up on the road. Bill Reynolds, bass player for Band of Horses, whose album Infinite Arms was nominated for a Best Alternative Album Grammy in 2010, is in that enviable position. When asked about performing onstage with Willie Nelson, he not only praises the man’s talents, he also tells of a wild poker night at the country legend’s Hawaiian outpost.

“We played with him in Maui,” says North Carolina–bred Reynolds, on the phone from his home in Ojai, Calif. “It was totally bizarre. I just remember having many, many Mai Tais and showing up at this house at midnight, and it just being the weirdest, wildest vibe. He was fucking ruling at poker. There were people just kicking ass. We didn’t even step up to the table. It was basically him and Woody Harrelson ruling everybody.”

Those sorts of nights are made possible by excelling at one’s craft. Band of Horses’ first album, 2006’s Everything All the Time, offered the spectacularly melancholy “The Funeral,” featured in a Ford commercial, on Gossip Girl and more than one skateboard video. Recent material has a rootsy vibe more closely reflecting the Southern disposition of current band members, including Reynolds, who joined Band of Horses almost five years ago after meeting primary songwriter Ben Bridwell at a North Carolina recording studio. “Ben was making a record, and I was in the same studio producing the album Emotionalism by the Avett Brothers,” Reynolds recalls.

Bridwell has remarked that this incarnation of the band is a “true creative and personal collective,” and Reynolds agrees. “Thankfully, we’re not bringing shitty ideas to the table. We all realize it’s his voice that we love to back up,” he says. “We were able to collaborate a whole lot more on Infinite Arms, and this new one that we’re working on now. He likes our taste and the stuff that we bring to the table, which is flattering.”

The next step for the band is to build on their momentum by writing and recording new songs. “We basically locked ourselves in this studio outside of El Paso, in the middle of nowhere. It’s different from what we’ve normally done,” says Reynolds, enthusiasm bursting through a laid-back drawl. “I just got the mixes today, so I’m excited about it. We’re going to try to make this one a little faster. You know, the last one, we used strings and loud, Phil Specter–recording techniques, just went kinda wide-screen crazy with it. This one will be a little bit more rock-y.”

Ah, yes, the sweet, blessed life of a rock star.