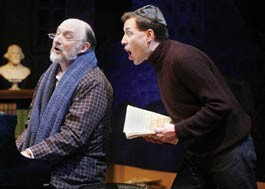 Old Wicked Songs is a play about the mysterious power of music, music so rich and human it can build one person up, inspiring him or her to greatness, while it slowly takes another person apart, so overwhelming with emotion and beauty that he or she can no longer stand before it without feeling worthless and ashamed. At the same time, the play is constructed by Marans with a calculated mathematical precision to unfold with deliberate and focused determination, like some dazzlingly clever algebraic equation being written out on a blackboard before us.

This is both good and not so good.

Old Wicked Songs is a play about two artists. One is a mysterious, suicidal, conspicuously washed-up old Viennese vocal coach, Josef Mashkan (the excellent Jarion Monroe). The other is Stephen Hoffman (Mark Farrell), a young, self-important, up-and-coming American pianist with a big creative block. When Stephen, who believes he has come to Vienna to train with a master pianist, is first assigned to a months-long stint learning vocal techniques with Professor Mashkan, the young man is as desperately hostile as Mashkan is just plain desperate.

The old, unemployed teacher insists that the young man sing his way through Robert Schumann’s celebrated and bittersweet song-cycle, the Dichterliebe. By the end of the play, they will end up challenging one another in (supposedly) unexpected ways, transforming themselves into fuller human beings and, ultimately, into sharper, more open-hearted artists.

The set by Steve Coleman is a stunner, a slightly surreal mix of reality and fantasy, with the interior of Mashkan’s music studio created in disheveled Old World detail, but with the walls betraying a slightly skewed perspective. Whole pieces of the back wall are ripped off, as if the stage were a magazine picture with a section torn artfully away, like the play itself, uneven edges and all.

The play, directed with an eye toward realism and detail by Barbara Damashek, is remarkably rich in emotion and honest in its characterizations. The relationship between Mashkan and Stephen is entirely believable.

In spite of this, and in spite of the first-rate performances by Farrell and Monroe, Old Wicked Songs is knocked down a peg by its pronounced lack of spontaneity, as if the actions and epiphanies of the characters were happening, not because of the twists and turns of a chaotic, disordered world (as the play seems to suggest), but as the mapped-out result of a playwright’s precise, efficient and orderly plan. It is a flaw, but not a fatal one.

History is full of plays, from Medea on up, in which the constructive architecture of the script is conspicuous at all times. Great art can be and has been built of such mathematically engineered structuring; David Auburn’s Proof, a play about mathematics, is so tightly structured and plotted out that one can’t help but notice its architectural underpinnings. But Proof is also packed with surprises, while Old Wicked Songs, studded though it is with twists and turns and personality changes, is never effectively unpredictable.