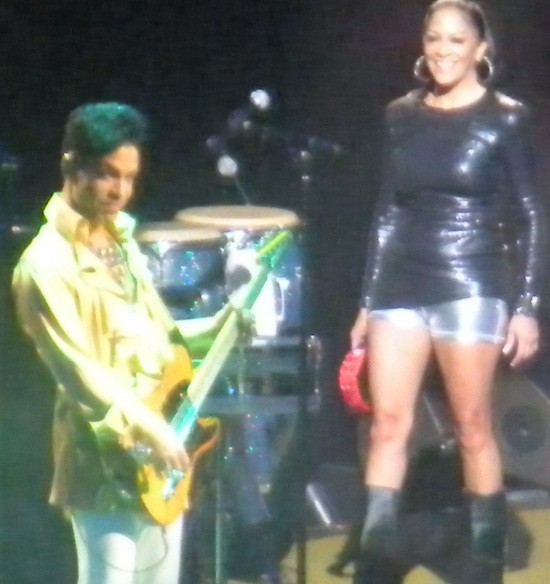 Prince and the New(est) Power Generation were in fine form Wednesday night, at the second of three nearly-sold-out shows at Oakland’s Oracle Arena. The Bay Area residency was only the second of his hit-and-run Welcome 2 America tour, announced less than a week earlier. This certainly sent the hype factor into overload, making the arena THE place to be this week for all-ages party folk to shake their asses off.

The evening was a nonstop tribute to old-school funk, right from the energetic opening set from Graham Central Station, headed by Larry Graham (who later joined Prince for a barnstorming rendition of classic “Thank You (Falettinme Be Mice Elf Agin)”). The Sly and the Family Stone alumnus was an appropriate choice, considering the pioneering group’s vast influence on Prince’s eclectic music and band demographics.When Prince finally took the stage a little after 9:00, he showed why he’s still a huge concert draw, burning his way through an opening suite of “Let’s Go Crazy”, “Delirious”, “1999”, and an extended “Little Red Corvette”. Then Sheila E. took the stage (where she thankfully stayed all night) for a faithful version of the Prince-penned “Glamorous Life”. Along with the funk standards throughout the night, KISS-FM programmers couldn’t have planned the night any better themselves. The near-capacity crowd roared and sang along loudly to every bit.Thus went the two and a half hour set of almost exclusively 1980s hits and funk classics, with obscure ballad “I Love U, But I Don’t Trust U Anymore” from 1999 (the year, not the album) and minimalist stomper “Black Sweat” from 2006 being the newest songs he performed. This decision was a welcome surprise from the ever-prolific Prince, as was his decision to tweak his annoying truncation of certain hits (this time, he gave at least 50% of most songs, which was enough for the tens of thousands in attendance).While the song selection was certainly worthy of the exorbitant price (top price level was around $280 a piece), the stage (shaped like Prince’s famous symbol) left many concertgoers out in the cold. Although he performed mostly center stage, Prince almost exclusively engaged only two sides of the arena, leaving half of the crowd to mostly view one of his three hefty backup singer-cheerleaders. This was quite a disappointment, considering the more mindful 360-degree approaches of groups including U2 and Beastie Boys. And although the 52-year-old’s voice still packs his famous range, his famous dancing and musical chairs (he played bass for a song, but no drums) were kept to a minimum.Still, the charismatic Renaissance man still puts most other pop stars to shame with his energy and formidable arsenal of songs. “Y’all coming back tomorrow night?” he asked the crowd at one point. Judging from the deafening reply, Prince’s fourth decade as a top-notch concert draw is a sure thing.—David Sason**SETLISTLet’s Go CrazyDelirious1999Little Red CorvetteGlamorous Life (Sheila E.)Somewhere Here On EarthI Love U But I Don’t Trust U AnymoreControversyA Love Bizarre (Sheila E.)Play That Funky Music (Wild Cherry)Sexy Dancer / Le Freak (Chic)Love Rollercoaster (Ohio Players) / Housequake (snippet)Angel (Sarah McLachlan) – sung by backup dancersIf I Was Ur GirlfriendKissPurple Rain———————Dance With Me in the Disco (Sylvester) / Baby I’m A StarMedley: When Doves Cry/Nasty Girl (Vanity 6)/Sign O’ the Times/Alphabet StreetForever in My LifeDarling Nikki (snippet) / Pop Life / Single Ladies (Beyonce)Black SweatThe Bird (The Time)Jungle Love (The Time)**