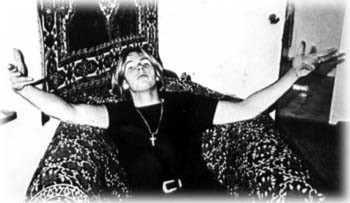 Hot-wired to his crackling nervous system by cheap crank and two hits of low-grade blotter acid, Dustin Harley Clark could feel his demons closing in. It was shortly after 3 o’clock in the morning on Sept. 6 when neighbors in the Roseland district of Santa Rosa first phoned 911 to report a white, blonde-haired male stripping off his clothing, behaving bizarrely, and howling in the night.

Two patrol units from the Sonoma County Sheriff’s Department responded to the calls. Deputy Joe Quinn found Clark, 23, standing in the roadway on Tara Drive. Clark was wild-eyed, stark naked, screaming that he was God, and insisting that he was being chased by the devil. Strung out from a “hard run” of methamphetamines, Clark had complained a couple of days earlier to his sister–at whose house he was staying in the area–that he feared for his sanity. Shortly after midnight, Clark and a friend dropped a couple of hits of LSD.

It took just 20 minutes for Clark’s demons to emerge.

Squaring off on Tara Drive, Quinn ordered Clark to lie on the ground. According to police reports, Clark stopped in front of Quinn’s patrol car, flailing his arms and yelling incoherently. Clark lunged at the deputy then turned and ran. Quinn hopped in his car and gave case, followed closely by a K-9 unit driven by Deputy Dave Smith.

At the intersection of Schlee Way and Tara Drive, Clark stopped and turned to face the deputies. Once again Quinn ordered Clark to lie down. Instead, Clark sat on the pavement, his mind reeling from powerful hallucinatory drugs and adrenaline.

Quinn pulled a canister of pepper spray from his utility belt and ordered Clark to lie down as Smith let his leashed police dog out of the back seat of his patrol car. Clark saw the dog, panicked, shrieked, and pushed himself up off the ground. Quinn discharged the pepper spray, hitting Clark squarely in the face. Clark wiped the hot fluid from his eyes and charged Quinn in a rage, kneeing him in the right thigh.

Naked and drenched in sweat, Clark wiggled from Quinn’s grasp. He charged the police dog and turned again on Quinn, who struck a couple of “glancing blows” to the suspect with a service flashlight, hitting Clark on the right shoulder and left side of the head. Clark broke away and turned to face the deputies again. Smith unleashed his snarling dog, which bit Clark several times.

Finally, Quinn and Smith wrestled Clark to the ground, lying on top of him. Quinn put Clark in an “arm bar” restraint; Smith bent Clark’s legs back in a hog-tie position. Clark fought back violently and then suddenly calmed down. That’s when Quinn noticed that Clark’s face had turned blue as he went into cardiac arrest. Paramedics arrived within moments and attempted to resuscitate Clark, who already had slipped into a coma.

The Sheriff’s Department asked the Santa Rosa Police Department to investigate the case, a customary procedure when a law enforcement agency is involved in the death of a suspect. Since Sonoma County Sheriff Mark Ihde also acts as the county coroner, the SRPD contracted with the San Francisco medical examiner to perform the autopsy on Clark’s remains. The conclusion: methamphetamine poisoning.

Yet questions about Clark’s fatal run-in with police linger. Clark’s mother, denied compensation in October in her county claim, has retained Santa Rosa attorney Michael Fiumara to file a wrongful death lawsuit in the case. Though toxicology results show that both speed and LSD were present in Clark’s bloodstream, the circumstances surrounding his death closely fit the profile of those who stand a good chance of dying in custody after struggling with police and being pepper-sprayed.

In California, law enforcement personnel use pepper spray once an hour. Once a month–or in one out of every 600 cases–a person dies after being pepper-sprayed by the police. In most of the cases, the victims are obese (at five-foot-nine and 205 pounds, Clark was slightly heavy for his height), middle-aged, under the influence of speed or cocaine, and engaged in frenzied and often bizarre behavior. Some are experiencing a psychotic episode that has nothing to do with drugs. Often the victim is placed on his stomach and hog-tied by police. In almost every case, the victim has a heart attack. Usually the victim stops breathing just as he begins to calm down.

“We are finding that in a large percentage of these deaths individuals may have a significant amount of drugs in their system–cocaine, methamphetamine, whatever,” says John Crew, American Civil Liberties Union police procedures expert. “But the toxicology reports come back suggesting that the levels [of these drugs] aren’t at a point normally thought to be lethal. These are excited individuals suffering either from mental illness [or from drug-induced psychosis], so police come upon someone acting in a very bizarre fashion–sometimes even violently–and usually either naked or partially disrobed, an indication of increased body temperature often because of the drugs.

“In 100 percent of these cases police use the pepper spray and it doesn’t work.”

The active ingredient of pepper spray is oleoresin capsicum, or OC, an oily substance derived from the dried extracts of chili or cayenne pepper. The resin is blended with a water or oil and mixed with some form of alcohol base. It is injected into a canister and dispensed with the help of an inert gas in short bursts in the form of a stream or fog.

When a person is dosed with pepper spray, the eyes swell and close instantly; mucous membranes become inflamed; coughing, choking, or shortness of breath accompany the excruciating pain. It is reportedly much more potent than tear gas or Mace.

It also is a hot item in the growing law enforcement arsenal. Since the mid-’80s, the man most responsible for pitching pepper spray to the police is FBI Special Agent Thomas Ward, ex-chief of chemical weapons training at the FBI Academy in Quantico, Va. He zealously urged federal, state, and local law enforcement agencies to buy the stuff–especially the Cap-Stun brand–assuring them that it is 100 percent safe.

Last February, Ward abruptly resigned from the FBI and pleaded guilty to taking nearly $600,000 in payoffs from the company that made Cap-Stun.

Despite claims that pepper spray is safe, there never has been a comprehensive health study of its effects. The chemical is not regulated by any federal drug or consumer product agency. In California, one of the last states to approve the use of pepper spray, a Cal-EPA Office of Environmental Health Hazard Assessment survey into the possibly lethal effect of pepper spray has succumbed to budget cuts.

Yet, OEHHA Director Carol Henry already had seen enough preliminary data to inform state Attorney General Dan Lungren in August 1993 that her agency was “concerned that in each [in-custody death] incident, untoward reaction to [pepper spray] may be the contributing cause of death, or may have exacerbated underlying conditions such as pre-existing disease or drug use to cause cardiac or respiratory failure.”

Lungren did not heed her warning. Instead, three weeks later, he approved certification of pepper-spray products for civilian use.

A 1995 ACLU report, “Pepper Spray Update: More Fatalities, More Questions,” examines 26 fatal cases between 1993 and 1995. It notes that state scientists have warned for several years that so little is known about the residual effects of pepper spray that medical examiners may not know what to look for during an autopsy, a real problem since there is no red flag indicating its role in a death.

The major manufacturer of pepper spray for California law enforcement has advised that police use just a single one-second burst of the chemical or no more than two half-second bursts. “Anything more than that, according to the manufacturer, is creating a health hazard,” says Crew.

While the Sonoma County Sheriff’s Department has set guidelines for the use of pepper spray, those guidelines lack any details about the amount of the gas that may be administered. “There’s nothing specific [in the guidelines] about the length or burst,” says Sonoma County Sheriff’s Lt. Dan Dragos, who has provided chemical weapons training to deputies. “No set guidelines. A two- or three-second burst or a three- to five-second burst. … It hinges more on what you’re dealing with.

“If you’re fighting for your life, you may use half a canister.”

It’s impossible to know exactly how much pepper spray Quinn used on Clark, but police records obtained by the Sonoma County Independent show that the blast fired from his canister most likely exceeded the dosage recommended by manufacturers. In an interview with SRPD investigators, Quinn said he decided to use pepper spray because Clark appeared to be high on drugs and the deputy “didn’t want to go physical on him. … It was a good steady shot. It should have incapacitated him, but he just let out a scream, wiped his face, and got up.”

How dangerous is prolonged exposure to pepper spray? “You have people who die after they have been sprayed,” Steven Beazer, president of Advanced Technologies, a manufacturer of pepper spray devices, told the Los Angeles Times in 1995. “Does pepper-spray have a role in some of those deaths? I will say yes. It is going to have an effect.

“These are weapons,” he added. “Clearly this is not a breath freshener or an underarm deodorant.”

In San Francisco, where police are at the center of a couple of high-profile in-custody deaths involving pepper spray, District Attorney Terence Hallinan had enough questions about the weapon to ban its use by his investigators.

The ACLU has stopped short of calling for a ban on pepper spray. However, the organization has proposed model policies. For instance, those guidelines recommend that pepper spray not be used on excited, overweight individuals exhibiting signs of possible psychosis or drug abuse; and that officers should not place a subject who has been sprayed on his or her stomach or side for a period longer than needed to apply handcuffs.

“We have called for careful, strict policies controlling how the weapon is used and mandating how a suspect should be handled after pepper spray has been used,” Crew says. “We also are calling for a thorough study on the health ramifications of this weapon–health studies that have not been done. We recognize that it’s a challenge for law enforcement and that these individuals are the most difficult to bring under control.

“On the other hand, from an officer’s safety standpoint, if as we believe there is substantially less of a chance that pepper spray is going to be effective in these kinds of situations, then it’s in the officer’s best interest not to think it’s going to work.”